Uncle Vanya is the most intimate of the Chekhov plays, and it has always been my favorite. It is a character study of great power and fragility. I often hear it referred to as a philosophical play thematically about the “superfluous man” or the “wasted life.” But at its essence, Uncle Vanya is very simply about passionate, banal, stubborn, miserable people reaching out, drinking, whispering to one another in the dark, coping with the vagaries and indignities of their feral loneliness, thrashing against their limitations and always coming up short. The current production at Classic Stage Company—directed by Austin Pendleton, who must have played the eponymous character in past productions more often than any other American actor—brushes the surface of this play’s potential to move, devastate, and engage. It’s a refined production, but one that keeps the characters’ emotions at arm’s length and only suggests their capacity for suffering and self-destruction. It offers some stirring moments and a comfortable, unforced contemporary feel, but it never reaches the fully agonizing intensity and humanity of these emotions.

This isn’t for lack of a vivid, exciting space in which to play. Santo Loquasto’s recreation of several dim rooms in this rustic country estate—complete with a staircase, a swing, and wooden beams descending from the ceiling, but no walls—suggests transparency and the intersection of private lives. It is a myriad of antique curiosities. Dust-covered chandeliers, old armchairs, books, vases, bottles, maps, and an actual samovar all give the place a lived-in quality and a warmth in the intimacy of the thrust stage. In close proximity, we are ideally positioned to become privy to these characters’ desires. Unfortunately the characterizations aren’t always compelling or credible, and the choices that work in their wisdom or originality aren’t enough to do justice to the Pandora’s box of fear and disappointment exquisitely drawn in what is, in my opinion, the best play of the modern era.

All right, enough with the superlatives. Vanya (Denis O’Hare) and his niece Sonya (Mamie Gummer) manage the estate together, and their routine, ordinary lives are upended with the arrival of Sonya’s father, a decrepit professor (George Morfogen) and his young alluring new wife Yelena (Maggie Gyllenhaal). As the bewildered, romantic Vanya, Mr. O’Hare is fidgety and restless, as if he had just woken up with a disagreeable taste in his mouth. He has some lovely moments of stillness, but too many of his sarcastic pronouncements are punctuated by a neurotic tic. Vanya is far from cool, and is emotionally naked to the point of self-martyrdom. It may be his ultimate indignity that the pain he perceives as suffering is actually something as superficial as neurosis. Still, it’s too bad that in the American idiom, Vanya is typed a hapless nebbish. The far more interesting choice is that of a soulful, funny, embittered man whose feelings and thoughts overwhelm him, whose tragedy is a total incapacity to cope. Mr. O’Hare’s reedy voice doesn’t project the gravity to make this man’s misery resonate.

If Mr. O’Hare doesn’t go far enough, Peter Sarsgaard, as the smooth country doctor Astrov who competes with Vanya for Yelena’s affections, goes too far in the wrong direction. Mr. Sarsgaard’s performance as a passive-aggressive schlub in the recent production of The Seagull was a fresh and intriguing take on a character who is more often portrayed as an enigmatic alpha male. Here, instead of being a foil to Mr. O’Hare, Astrov out-Vanyas Vanya. He is petulant and whiny, with a persistent drawl. He has an easy sensuality that makes him credible in a seduction scene, but on the whole, it’s pretty hard to understand why all the women are getting hot and bothered about this guy. The interpretation does reap some rewards. Sonya’s desperate attraction to Astrov has an unusual poignancy, considering that in their scenes together, he is thoroughly unattractive. It speaks to the hopelessness of Sonya’s prospects that there are simply no other eligible men around on whom she could project these feelings. But the cosmopolitan Yelena should know better, and her speeches in which she calls Astrov an irresistible genius come off ridiculous. I missed the aggression and the arrogance of this character, the entitlement and violent masculinity that counter his nobleness and sensitivity. Vanya and Astrov, after all, approach the same midpoint of ineffectuality and failure from opposite poles.

In light of these frivolous men, Uncle Vanya becomes more of a ladies’ play. Ms. Gyllenhaal is the most dramatic presence in the love quartet. With a non-committed grace and a hairstyle that looks like it must have taken hours in front of a mirror, this Yelena has a bit of the southern belle in her and is at once enchanting and vacant. Bored into a state of near-total passivity, she responds to everything with a kittenish, evasive laugh. Ms. Gyllenhaal’s scenes with Mr. O’Hare are memorable for their physical intimacy and demonstrative affection. She touches his face so much that these moments seem uncommonly redemptive, despite the fact that Vanya is comforted and pained with every touch. This complicated relationship rings true.

Ms. Gummer, as a hardworking young woman of integrity who is nearly overcome by feelings she can’t control, also gives a grounded and convincing performance. She is sober and mature. Wisely, she resists sentiment. Like the other actors, she is more restrained than one might like, but Sonya is the one character who can get away it. On the other hand, Sonya’s and Vanya’s is the key relationship in the play (in re: the title), but Ms. Gummer’s and Mr. O’Hare’s scenes together offer no real breathtaking moments. Like much of this production, they left me a bit cold.

There are some memorable performances from the supporting cast, who is more present in the production than perhaps is the norm – an intriguing directorial choice has characters sometimes linger silently in scenes in which they are not textually present. Mr. Morfogen’s professor, rather than seeming a self-absorbed tyrant, is rather benign and small. His scene with Ms. Gyllenhaal emphasizes the dramatic differences in age and size between the two actors. The timeless-looking Louis Zorich, as the optimistic hanger-on Waffles, has stunning wisps of white hair. Cyrilla Baer, as a nurse whose solution to everything is God and vodka, is entertainingly sassy (she was unforgettable last year as the shrill, abrasive wife in the musical Adding Machine).

This is not the first-class production of Uncle Vanya I was hoping for, given the artists involved. To a large degree, this was a problem of stakes; nothing seemed quite as significant as it should have. Lives may not be significant in the great scheme of things, but what else is there in theater? It’s a shame when a production doesn’t quite come together because there is such beauty in the balance of conflicting personalities, and the play has so many wonderful dimensions. Look at it superficially, and it can be deconstructed into an assembly of stock parts: virile hero, sad comedian, uptight matron, self-important academic, diva, ingénue, wacky neighbor. Look deeper, and these are profound individuals with maddening contradiction. The light changes, and you realize that these people are you and me, and people we know, and all of us in our moments of uncertainty, vulnerability and pain. I will come to this play again and again in my lifetime. Long live Uncle Vanya. 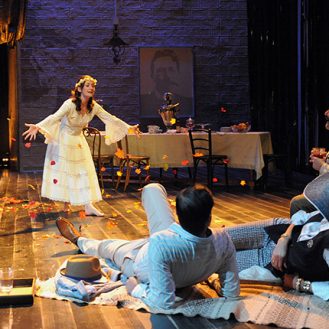 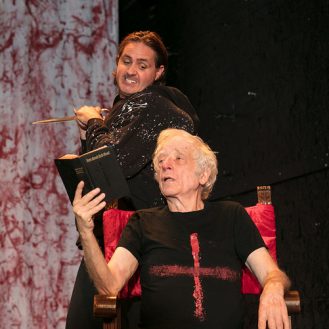