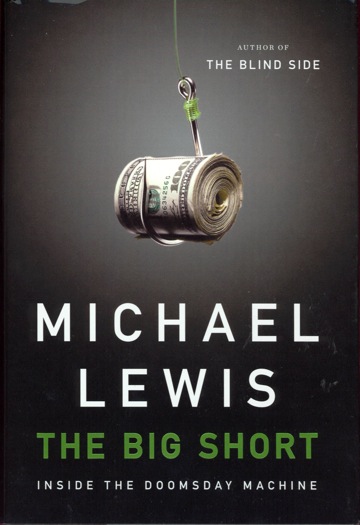 The Big Short: Inside the Doomsday Machine by Michael Lewis

The Big Short: Inside the Doomsday Machine

Grab a beer and a bowl of pretzels when you sit down with The Big Short by Michael Lewis. You’re not just reading a book, you’re going to a game – a big, ugly, but oh-so exciting game. Lewis reports the causes of the current financial disaster with all the passion, pacing and testosterone of John Madden calling NFL plays – not surprising from the author of The Blind Side and Moneyball. He makes a complicated story easy to understand (most of the time) and takes us inside the heads, souls and maneuverings of several fascinating players.

Vastly simplified, the playing field is the entire financial world, headquartered on Wall Street. The game itself is simply trading – like baseball cards or marbles but with higher stakes. For every buyer, there’s a seller; for every winner, a loser; for the smart money, dumb money.

It helps to think of the instruments being traded as a Russian doll. At the core are homeowners’ mortgages – by 2005 mostly subprime, adjustable rate mortgages (low rates only for the first two years) sold to people who can’t afford them.

The next layer of the doll is mortgage bonds made up of hundreds of the mortgages packaged and traded by Wall Street firms. The least risky bonds are rated triple-A by the rating firms (Standard & Poors and Moody’s). The riskiest are rated triple-B. But there’s a  problem with the triple-B bonds: The big money, the institutional investors, only buy “risk-free” triple-A bonds.

Now here’s where it gets dicey. Around 2004 a few bond traders at Goldman Sachs, the firm being sued for fraud by the Securities and Exchange Commission,  came up with another layer of the Russian doll. To disguise the risk of the triple-B rated bonds, they packaged them together into yet another layer, a new version of the Collateralized Debt Obligation (C.D.O.). They were able to convince the ratings agencies that together in one C.D.O.  these risky bonds were no longer risky because the housing market couldn’t go bad everywhere all at once – which, of course, it did.  The ratings agencies bought this twisted logic (maybe because it came from their customers, the investment firms) and rated the C.D.O.s triple-A. Now the institutional investors could buy them.

All along the way Lewis reminds us of the billions and billions of dollars being made year after year trading the above derivative instruments.

With the amount of money being invested in C.D.O.s, Wall Street decided it needed to insure them. AIG, an insurance company, was one of the first to provide that insurance for ridiculously little money (how risky could a triple-A rated C.D.O. be, after all?). This insurance was called a Credit Default Swap, or C.D.S..

Virtually all of the institutions and Wall Street firms bet that the housing market would rise; they bought the mortgage bonds and the C.D.O.s … i.e., went “long.” Very few, including Lewis’s “heroes,” correctly bet that everything was going to come crashing down and bought the insurance, the C.D.S.s, or went “short.” Hence the title of the book.

Lewis’ skills as an explainer are exceeded only by his skills as a story teller. He shares the perspective of his heroes. One is Dr. Michael Burry, who left medicine to become an investor. Since childhood he had trouble relating to people and blamed it on his glass eye. (He lost a good eye to cancer at the age of three.) Only in his thirties did he learn he also had Asperger’s syndrome. He preferred working alone buried in the minutiae of Wall Street prospectuses. Eventually, he attracted investors and established a hedge fund, Scion Capital, whose mission was to discover underpriced stocks. After his analysis revealed to him that the subprime mortgage market was a fraud, he turned his stock fund into a Credit Default Swap fund. By end of July, 2005, he owned $750 million worth of C.D.S.s on subprime mortgage bonds.

His investors, who’d bought into a stock fund, were none too thrilled and sued him. But per prior agreement, Burry didn’t have to give them their money back for a year and then he found a way to keep it until the initial low ARM mortgage rates readjusted to unaffordable high rates and the housing market collapsed.  Burry shared his investors’ irate emails with Lewis. In the end, Burry made an after-fee-and-expense gain for them of nearly 500 per cent. In the same period the S&P rose just over 2 percent. No one ever said thank you.

To Charlie Ledley, Ben Hockett and Jamie Mai at Cornwall Capital, the US financial system was corrupted by a “cabal of Wall Street banks, rating agencies and government regulators.” They started their business in early 2003 in Jamie’s garage in Berkeley and looked for in-trouble companies whose recovery was a long shot. Each time one of them came across one such company, they made the case to the other by giving a PowerPoint presentation. They started with $110,000. By the end of their third year they had $30 million and had moved to NYC where their offices were in Greenwich Village on the floor right above Julian Schnabel’s studio.

“We always looked for someone to explain to us why we didn’t know what we were doing” said Jamie. “The more we looked at what a C.D.O. really was, the more we were like, Holy shit, that’s just fucking crazy. That’s fraud.”

We learn a lot, too, from Steve Eisman at FrontPoint Partners. He thought the bond market was stupid and always out to screw him. He was as lacking in charm as he was brilliant. He brazenly cheated at golf. He interrupted speakers at big industry conventions and called them liars. His wife said that “Even on Wall Street people think he’s rude and obnoxious and aggressive … he has no interest in manners.”

We keep rooting for the heroes, no matter how strange they are, especially since the bad guys are so unbelievably delusional. (Are obscene profits a known cause of delusion?) For example, Howie Hubler, the highest status bond trader at Morgan Stanley, lost over $9 billion for his company. ($9,000,000,000)  No one ever questioned his trades. Maybe because John Mack, the CEO of Morgan Stanley, was such a bad overseer. He couldn’t even fully explain what Morgan Stanley had done to lose all those billions after the fact.

At the end of it all, Wall Street believed its own sales pitches and owned billions in  C.D.O.s themselves. As Charlie Ledley said, the big Wall Streets firms seemingly “had somehow become the dumb money.” And they were leveraged,  too,  up to 40 to1. The taxpayers saved most of them with $700 billion in the Troubled-Asset Relief Program. Even if the money is coming back at a profit, what about the jobs? People’s homes? And people’s lives?

Now that I get it, I’m mad as hell and … and … and what? No one knows what to do. Even Obama’s top advisors don’t agree. Regulate the borrowers? The derivatives market? The rating agencies? Still, they can only prevent what has already happened and surely there will be some new scheme which Lewis could make into another great page-turner. Forget the pretzels – pass the Prozac. 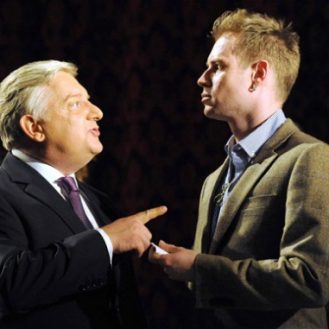