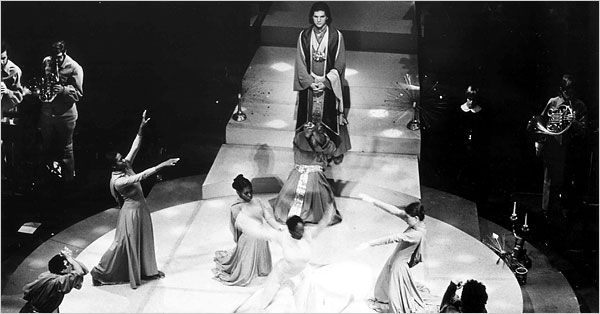 The 1971 premiere of Leonard Bernstein’s Mass

“My time will come.” This, the most famous quote from Gustav Mahler, wouldn’t seem apt for the music of Leonard Bernstein. His time was now, over and over, whatever decade from the Forties to the Eighties one is talking about. But there were dips in his meteoric trajectory, and Mass, which opened Kennedy Center in 1972, was a drastic one.  Reviews weren’t merely dismissive; they expressed embarrassment for the composer, who leapt from his pedestal as an icon of classical music into the arms of hippies, flower children, and the Age of Aquarius. The work owed a distressing amount to Hair, the musical, and less obviously to Benjamin Britten and Bernstein’s own earlier works. As a spectacle, it combined the liturgy of the Latin Mass with episodes of the mob (updated with tie-dye, peasant blouses, and afros)  jeering at the Church and belief in God generally. Bernstein wasn’t, shall we say, the most obvious candidate for a work of Christian devotion, and with eyes averted from the schlocky libretto — crafted by Broadway baby Stephen Schwartz, who was young but no wunderkind– the composer’s admirers chose to bury Mass as an ecumenical mess. The prevailing wisdom was that this, too, shall pass.

But it didn’t. For forty years now Mass has had a healthy life in revivals and on disc (there are three complete recordings besides the one made at the Washington premiere by Bernstein). Even his cosmic ego would have been rather amazed at the romping, stomping ovation that Mass received last night on the South Bank, with the audience applauding in unison while some leapt to their feet to dance in the aisles. (“This doesn’t really happen that often in Royal Festival Hall,” my very British seatmate whispered to me. But her face was glowing, and one could tell that she wanted to run off and join the fair, too.)  Two performances were the culminating event of a nine-month festival known as the Bernstein Project, spurred by a one-time acolyte, conductor Marin Alsop. There’s no doubt that she is a true believer: Alsop took Mass from Baltimore, where she leads the local orchestra, to Carnegie Hall two years ago and then made a recording for Naxos. In London there was an air of Christian community as five hundred performers, including a children’s chorus 120 strong, several adult choirs, a brass band from Manchester, and a youth orchestra gathered from several points in Europe,  not to mention a large crowd identified as “street people,” turned Mass into just what Bernstein envisioned, a work of renewed faith nearly as gargantuan as the Mahler Eighth, but with bell bottoms.

The hunched figure in the front stalls who isn’t shouting Hosanna is me.  This whole multi-cultural, multi-media love fest hadn’t erased the odor of multi-chutzpah on Bernstein’s part.  Mass has some respectable bones. It’s a steal, so far as structure goes, from Britten’s solemn but also multi-cultural War Requiem, which originated the notion of alternating Latin liturgy with secular verse. Bernstein also lifted Britten’s division of forces — the children’s choir, a main and chamber orchestra, and divided adult chorus–but where using Wilfred Owen’s poetry on the pity of war was a master stroke, the doggerel of Schwartz, aided by the composer, is vapid in its attempt to be hip, naïve, and populist — in the end it comes off as cringe-worthy (“Sing like you like to sing” occurs early, before we get rhymes like “scuttle” and “subtle,” or the Creator gazing on his work “and it was goddam good”),  Rhyming couplets were not, um, a wise choice.  And certain sentiments (“God loves all simple things, for God is the simplest of all”) are patently nonsensical.

If the work’s weaknesses remain many, it can’t be faulted for theatrical punch. The setup is easy-peasy to follow. A young priest, known as the Celebrant, conducts the familiar sections of the Catholic Mass, from the Kyrie through to the Agnus Dei and Sanctus, which Bernstein sets in a serious, songful style familiar from this early “Jeremiah” Symphony and the film score to On the Waterfront.  In between each section, a gaggle of street people jeers at the Celebrant, mocks his faith, and descends into a Summer of Love version of the Israelites worshipping the Golden Calf. These demotic interludes are set in Bernstein’s deft riffs on pop-flavored jazz and Tin Pan Alley. The Celebrant continues his worship unabated, but suddenly he can’t take this torrent of scorn. He smashes the chalice and demolishes the implements of the Mass, entering into a rambling breakdown shamelessly stolen from the last scene in which Peter Grimes does the same thing, basically for the same reason. At this spectacle the crowd grows hushed. Trembling hands reach out to touch the shattered body of the Celebrant. Then two children begin to sing a simple melody set to the words “Lauda, laudate,” and one by one the entire world joins in, reviving the Celebrant’s hopes and restoring his faith (if you’ve seen the stirring final number in Bernstein’s Candide, “Make Our Garden Grow,” you’ get the effect).

Five hundred performers making a noise unto the Lord, joyful or not, is sensational enough to blot out the puerile theology of Mass, which is based essentially on a line from Bernstein’s “Kaddish” Symphony: “I’ll believe in God when He believes in me.”  The jaw-dropping solipsism of this idea, if you can dignify it as an idea, apparently didn’t bother the composer. To solemnize the occasion further, we were shown projections over the stage of highlights from the turbulent Sixties, including war, protest, and the Kennedy assassination (Mass is dedicated to the slain President), which is fair enough. Bernstein, a lifelong liberal and humanitarian, meant for Mass to be a kindly rebuke and fatherly mourning of a tragic era. “God is ill,” the Celebrant says (rather lamely) near the end, advising the silenced mob to listen for the small inner voice which is all that remains of Him. As a cry of anguish, Mass is genuine, even if in a jaded mood one might repeat something like Oscar Levant‘s quip, “Behind the phony tinsel of Hollywood lies the real tinsel.” It’s that heartfelt cry and the street-fair Kumbaya mood at the end that brings the audience to its feet.

My readers are either nodding with me or snarling at me by now, but I should mention the brightest part of last night’s Mass, which was the singing of the young, appealing American baritone Jesse Blumberg  as the Celebrant (“Mrs. Blumberg, are you sitting down? Your son’s a priest!”), marshalling  the operatic and pop side of the music into a dignified whole.  His avoidance of mawkish sentimentality was a blessing. Alsop conducted with skill and assurance. A dozen solo voices were uniformly excellent, and the choruses acquitted themselves admirably. On the musical side, one could hardly ask for more.

It was a sultry summer evening crossing the bridge to the Strand, and within a shout of each other I could hear a Jamaican steel  drummer, a string trio, a blues trumpet, and some dancing street singers. That’s the modern urban polyglot, and Bernstein was prescient about it. His time has come, and if God has not disposed the world with less suffering, a line from Mass holds good: the union of mi and sol on the musical scale gives you “my soul,” a terrible pun but a pleasing notion. 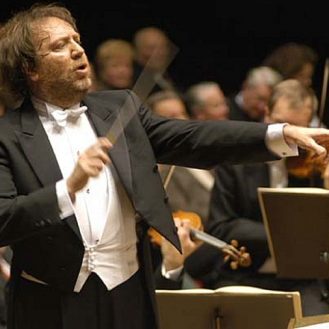 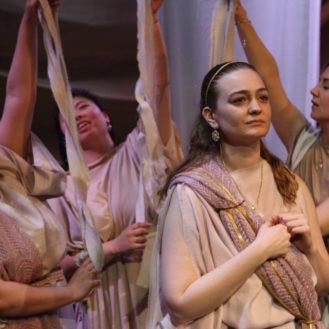