Norbert Leo Butz as Agent Carl Hanratty in Catch Me If You Can. Photo Joan Marcus

Frank Abagnale Jr. could be the busiest felon of our times. In 1980, he published a memoir. Stephen Spielberg made a movie based on the book called Catch Me If You Can in 2002. Next season he’s been booked for the first-ever Speakers Series at Boston’s Symphony Hall. And a few days ago on April 10, 2011, a musical version of Catch Me If You Can opened on Broadway. Oh Frank, you should have skipped the Broadway gig.

His is a mesmerizing story. Before Abagnale (played by Aaron Tveit) was 19 years old, he had forged millions of dollars of checks worldwide and had conned people into believing he was a pilot, a lawyer and a doctor. His sly, tax-dodging father (Tom Wopat) and his glamorous French, war-bride mother (Rachel de Benedet) divorced when Abagnale was 16, prompting him to run away from home and start forging checks when a lawyer asked him to choose which parent he wanted to live with. After two years of being chased by a dogged FBI agent, Carl Hanratty, (Norbert Leo Butz), Abagnale fell in love with a young, spunky nurse, Brenda Strong (Kerry Butler), who took him home to meet her quintessentially Southern parents, Carol (Linda Hart) and Roger (Nick Wyman).

Hanratty finally caught Abagnale, and, in a heartwarming twist, had him released from jail to work in the check fraud department of the FBI, where Hanratty became his mentor and friend. Many of the security features of today’s checks were developed by Abagnale, who, in the end, became a wealthy man honestly.

If only the musical had stuck to the story and allowed the characters to express themselves in song. Instead the author of the musical’s book, Terrence McNally, and the composer (Marc Shaiman) and lyricists (Marc Shaiman and Scott Wittman) pile on an extra layer – a nightclub in which Abagnale relates his life in flashbacks to the accompaniment of an on-stage orchestra and a chorus line complete with white-feathered fans. The flashbacks literally pop up onto the stage on pneumatic lifts, communicate their plot points in a series of punch lines without the jokes and leave the way they came on the lifts. The respected playwright Terrence McNally – author of The Lisbon Traviata and Ragtime among others – should have known better.

Standing in front of the orchestra, Abagnale comes across as Barry Manilow at the Copa instead of a cunning and vulnerable teenager. Tveit sings and dances with charm, but rarely communicates his character’s complexity. Abagnale’s constant motivation for making money is to help his father get back on his feet and woo his war-bride wife to return to their marriage. Very little of that desperation comes through.

Think of the most exciting moments in the American musical theatre. Songs such as “This Nearly Was Mine” from South Pacific or “I Hate Men” from Kiss Me Kate make the audience feel their characters’ passion. With the rich characters of Catch Me If You Can the potential was there. Instead the audience gets paltry glimpses of what could have been – and a lot of gratuitous glitz.

Of the nine musical numbers in the first act, only one expresses character: “Don’t Break The Rules,” sung and danced by the pudgy Butz wearing a grey suit and dark grey fedora and backed by a similarly dressed male chorus. Their enthusiasm is palpable.

The show finally comes together in three musical numbers at the end of the second act, when the girlfriend, Brenda, Abagnale himself and then Abagnale and Hanratty express their characters and relationship musically. These songs are heartfelt – showstoppers, really. But it’s one and a half acts of rote songs and chorus  preening getting to these gifts.

The stand-out performance of the evening belongs to Norbert Leo Butz (Tony-Award winner for Dirty Rotten Scoundrels) as Hanratty. He’s not the star of the story, but he’s the star of the show. This speaks both the strengths of Butz’s performance and the weaknesses of Tveit’s.

Rachel de Benedet is elegant and believable as Abagnale’s mother, a woman who beguiled her husband with her dancing and causes a similar reaction in the audience. But Tom Wopat (Tony winner for a recent revival of Glengarry Glen Ross) disappointed as Abagnale’s father. This role was played charmingly on the screen by Christopher Walken as he put one over on a banker or sales clerk, and with pathos as he lived his son’s escapades vicariously. Linda Hart as Brenda’s mother rises above her cliché character.

Kerry Butler (Tony nomination for Xanadu) as Brenda has the first song in the second act where the music and lyrics express character and the show becomes exciting emotionally. Her song, “Fly, Fly Away,” conveys her wish that Frank will have a good life after he has left her. Butler is a belter and she gets to you. When Abagnale finally has his own song, “Good Bye,” and sings that he wants “to lead a life not just play a part” you want to yell out “There you go, Frank. What took you so long?” The final song, “Strange but True,” is a celebration of the new friendship between Hanratty and Frank. It’s an up-beat, exciting moment in the theatre. But were these three songs worth the wait?

This musical of Catch Me If You Can was directed by Jack O’Brien (Tony winner for The Coast of Utopia). The seen-it-before choreography was by Jerry Mitchell (Legally Blonde). Marc Shaiman, the composer/lyricist, wrote the enjoyable, upbeat Hairspray, as well as the emotional score for The American President among many movies. He has done better. If you want to hear appropriate music for Abagnale’s story, listen to John Williams’s jazzy, syncopated score for the movie. It’s one of his best.

While this musical is not without its redeeming qualities, given its source material it should have been so much better. Better to catch Catch Me on HBO or rent it from Netflix. In a nuanced performance, Leonardo DiCaprio does justice to Abagnale’s unique life.

Aaron Tveit and the company of Catch Me If You Can. Photo Joan Marcus 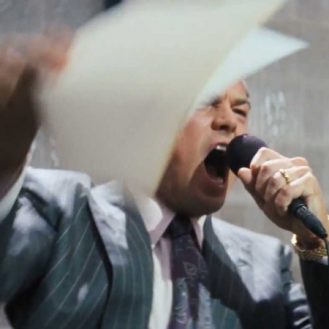 A Window on his World: Scorsese’s The Wolf of Wall Street

Stephen Sondheim’s Follies at the Marquis Theatre on Broadway