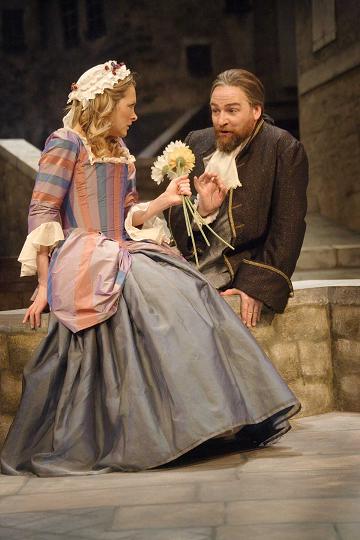 Nicola Roy as Agnes and Peter Forbes as Arnolphe appear in Educating Agnes, by Liz Locchead, directed by Tony Cownie, at the Lyceum Theatre in Edinburgh. Photo Douglas McBride.

“You have to laugh,” Horace (Mark Prendergast) says to Arnolphe (Peter Forbes), the antagonist of Molière’s play, newly translated into rhyming couplets by the Scots Makar Liz Lochhead and revived by Tony Cownie for the Royal Lyceum Theatre in Edinburgh this spring. This adage is repeated twice more, and the audience must take comfort in it. The world of Educating Agnes is disturbing, devoid of human feeling, and the only coping mechanism for both the audience and the characters is to laugh. The Royal Lyceum Theatre in Edinburgh is perfectly suited to taking on this type of 17th-century drama, both in atmosphere and sheer theatrical clout.

‘Makar’ is the old Scottish term for royal poet or bard, akin to Poet Laureate in England and the United States. The first to be awarded the honour was Edwin Morgan, and upon his death in 2010, the title was passed to Liz Lochhead, a writer known primarily for her political plays and poems about the situation of women—all written in language of a strong Scottish colour. Lochhead rubbed shoulders with the Scottish postmoderns such as James Kelman and Alasdair Gray, inspired by The Group, a creative writing program initiated by Philip Hobsbaum, the London-born, Yorkshire-bred critic and poet. In an interview from 2002, Hobsbaum recalled how a friend termed the early activities of The Group as “group therapy”. Its aim was very simple: to encourage writers like Lochhead to produce good work, and Educating Agnes is indeed good. Hobsbaum was enamoured with the rise of the female poet in Britain, and furthermore the state of poetry in Scotland, and Lochhead, with her sparkling, funny, deft translation of Molière, illustrates his point two-fold. The audience is in safe hands. Lochhead and the Lyceum understand Molière deeply, and their production is accomplished and intelligent. 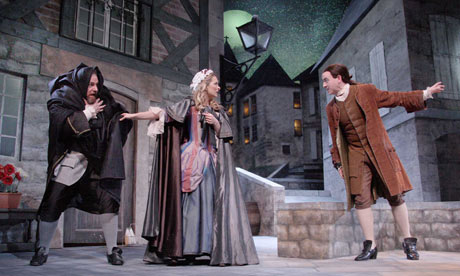 The plot is a typical Molière set-up: an older man, Arnolphe (Peter Forbes), seeks to take advantage of his young ward Agnes’ (Nicola Roy) innocence and marry her himself. His reasoning is that a young woman with no education on the finer points of human intercourse (figurative and literal) will not dishonour him by having an affair. The men of the village where the play is set are wimpy, Arnolphe tells his friend Chrysalde (Lewis Howden), and Arnolphe is determined to break the mould and show the village women that the men are still in charge. Horace, a young man who is the son of one of Arnolphe’s old friends, has been courting Agnes, but has no idea that Arnolphe wants to marry her himself. The intrigue of the play is therefore two-fold: will Agnes marry the one she wants, and will Horace ever figure out Arnolphe’s true intentions? Horace is aware that someone is trying to prevent him and Agnès from being together, but his stupidity, rather than Arnolphe’s cleverness, is what allows the play to move forward. The ending is clichéd, because that is Molière’s intention. Love is not at stake here, but human stupidity.

The Royal Lyceum Theatre is a perfect performance space for 17th-century productions. Like a perfect marriage, the play and the space bring out each other’s good aspects, and make allowances for characteristics that other people are sceptical of. The entire production is an exercise in 17th-century theatre-going: the lights do not go down completely, for one. We realize, as we watch, how conditioned we are by the cinema and late 19th century naturalist theatre, where the audience is swaddled in darkness and must confront the play on his or her own terms. The red velvet seats, the gold and teal swirls which almost distract the audience from the stage and the sheer awareness of being part of a group which must be entertained conjure up a primal feeling in such a genteel setting. Being made to laugh is mechanical and disturbing: George Bernard Shaw’s review of Oscar Wilde’s The Importance of Being Earnest commented on the play’s perceived heartlessness through the play’s awareness of itself as an engine for laughter. Educating Agnes is somewhat a part of this: we laugh for laughter’s sake, but it is really to cover up the uncomfortable realities with which we are faced. Educating Agnes is part of a theatrical tradition to which we owe so much: the sitcom, for example, is indebted to the comic intrigue and set-up which become exquisitely frustrating as the play unfolds. The atmosphere is extremely taut because not only are we watching the action, but the action is acutely aware of us. Peter Forbes’ Arnolphe is believable, and takes us into his confidence with his constant asides and looks that he throws our way. You have to laugh, because in reality, we are uncomfortable with the worldview that the play represents to us: love and procreation are not the focus of the play; they are merely a sideshow. For Molière, the real focus is the uncaring stupidity of unhappy people, who in turn exploit others. At the end of the production, we are not left with the joyful vision of love and marriage, horse and carriage. Instead, Arnolphe is alone, mocked by his servants.

An acquaintance of mine went to see the production a few weeks after I did, and I asked her what she thought. Her reaction was this: “I walked out halfway through.” Educating Agnes may be intelligent and slick, but it is not fluffy rom-com fare by any means. This seems to be a common mistake in It adheres to no familiar moulds and offers no comfort. The high walls of the town in the stage set are as flimsy as Arnolphe’s morals. The Royal Lyceum succeeds in portraying the sheer façade of the piece, and how façades can be at times more powerful and disturbing than depth. Walking out is certainly tempting, but only because we cannot bear what we see onstage. The laughter of the audience hides the sorrow of Agnes and the tyranny of Arnolphe, but not for long. The servants Alain (Steve McNicoll) and Georgette (Kathryn Howden) emerge from Agnès’ house and soothe the audience with slapstick comedy and mental denseness, which is welcome in a play where intelligence is a vice, not a virtue. Not only do we laugh, but we have to laugh, because it is the only way of processing the indelible reality of Arnolphe’s cruelty and Agnès’ infuriating innocence.

There is nothing inherently wrong-footed about the production. The only thing we must be aware of as an audience is ourselves, and the danger of mixing the emotions Molière provokes in us with value judgments on the play’s acting, setting, costumes, etc. Hundreds of years before Bertolt Brecht and the theatre of estrangement, Molière was making audiences question power structures and gender relations via an atmosphere which was recognizable but also deeply disquieting. In short, the Royal Lyceum does a splendid job. 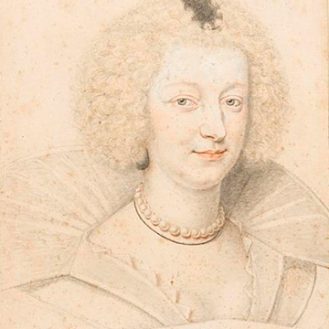 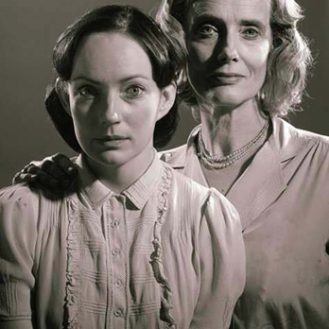 The Glass Menagerie by Tennessee Williams at the The Royal Lyceum Theatre, Edinburgh 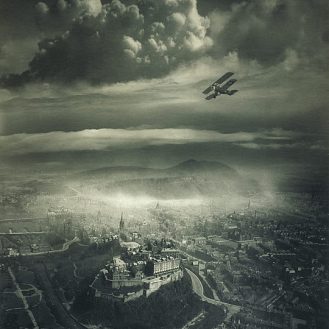 Edinburgh Walks – Part I of a Series