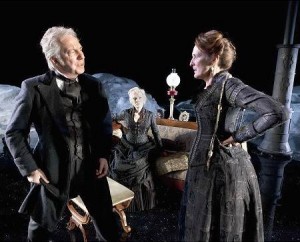 in a new version by Frank McGuinness
Directed by James Macdonald

Arguably one mark of an exceptional production of a classic play is its ability to behold the cultural moment, examine it from unusual perspectives, turn it upside down and sideways, burrow through it, and ultimately transcend it in a way that reveals the timelessness and indefatigability of our cultural and emotional obsessions. John Gabriel Borkman, the story of a family desperate to restore its respectability after its patriarch, a financier, ruins their reputation through embezzlement and fraud, effortlessly kindles a collective sense of comeuppance and schadenfreude. Yet in place of obvious allusions to contemporary financial villains, the play depicts a disturbed, macabre family warped by a potent mixture of narcissism and grief. Damaged relatives fight tooth and nail to recover shreds of lost dignity, and they transform their gloomy household into a battlefield where weary egos vie for primacy and survival.

The most combative and volatile of all is Gunhild, the wife who saw her once-honorable family name dragged through mud, and who inhabits the ground floor of a unkempt Gothic manor while her husband, the Borkman of the title, confines himself to the second story, which he had not left since he was released from prison. As this brittle and scathing woman, Ms. Shaw stalks and limps about the stage with the rancor of a vulture. Seething with suspicion and contempt, downtrodden but not defeated, Gunhild is a striking theatrical creation whose presence is nothing short of electrifying. The plot is set in motion when Gunhild receives an unexpected visit from her sister Ella (an elegant and stately Lindsay Duncan). Ella had raised the Borkmans’ son teenage Erhart and paid to prevent the seizure of the Borkmans’ assets. Gunhild’s indebtedness to her sister rankles Gunhild and amplifies her humiliation, so she becomes apoplectic when the childless Ella expresses her desire to adopt Erhart (a naïve and effusive Marty Rea). Gunhild will not surrender her son, her only hope for redemption, and so instigates a ruthless tug-of-war.

The ghostly Borkman himself can’t be bothered to descend from his upper-story exile to arbitrate the bickering of the women below. As the haughty and morose financier, whose hubris is megalomaniacal and whose self-absorption is sociopathic, Alan Rickman is an irresistible study of subtlety and restraint. As his expression shifts between each sly smirk and somber glare, he effortlessly embodies an unscrupulous businessman indulging in private comeback fantasies. His pastime is tormenting his guileless sidekick, Vilhelm (John Kavanaugh), an old man who visits him daily and whose teenage daughter shows up to play the piano. Borkman believes that his reputation will be rehabilitated, and he shines his shoes compulsively in expectation of some important visitor. Condescending and snide, he oozes egotism and places personal ambition above love and family. Like the women, he pins his hopes for redemption on Erhart, presuming that Erhart’s untarnished reputation will whitewash Borkman’s disgrace.

Just as pressure mounts and stakes approach the proportions of classical tragedy, Ibsen achieves a dexterous and sensational sleigh of hand. When Erhart finally returns to parse through his family’s demands and expectations, this riveting psychological drama turns into a farce as the characters’ motivations, previously combustible and severe, appear absurd and utterly delusional. Erhart, a carefree teenager full of youthful indiscretion, doesn’t concern himself with family baggage or obligations. As in all great drama, the conclusion, which involves Erhart’s affair with a deliciously manipulative sexpot widow, is both surprising and inevitable, and deeply satisfying.

The outdoor coda, in which a cleansing snowstorm envelops the woods surrounding the Borkman estate, is lovely and stirringly emblematic. The woes and preoccupations of a flawed, headstrong clan are swept away to reveal an immaculate landscape, which a new generation will sully with its own miseries and mistakes. 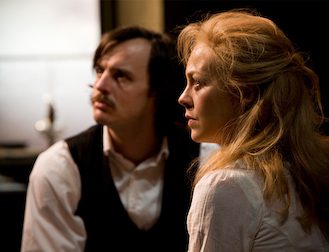 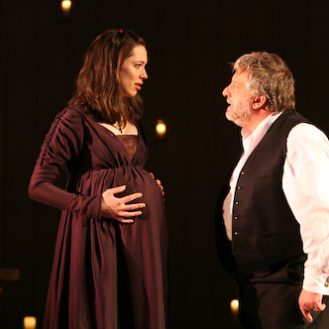