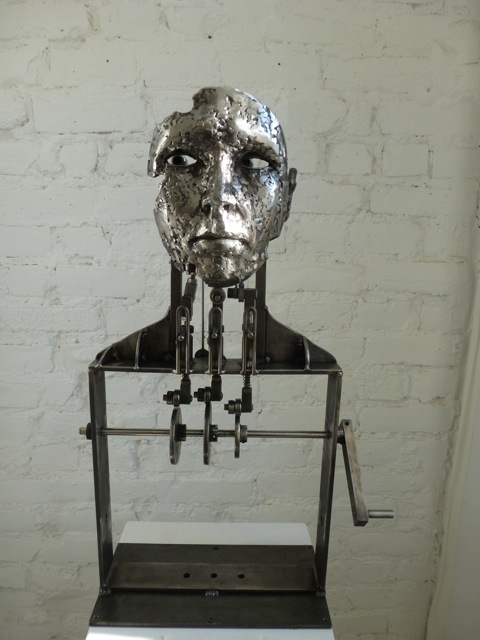 Gallery hours: Friday, Saturday, Sunday 1-6 pm and by appointment
Prices range from $325 for the small figures to over $18,000 for the life-size steel pieces.
—

The little girl hesitatingly reached up and pulled down on a steel rod at the base of small steel dragonfly mounted on the wall. Suddenly the insect’s delicate, sculptured wings opened and separated – as if it were about to fly.

The girls were enchanted. Though the experience of cranking open the eyes of mysterious face mounted at eye-level next to the dragonfly they had to admit had been, well, “pretty scary.”

The life-size steel face, a sculpture by Alexandra Limpert called “Oracle,” indeed stars directly at the viewer, then when cranked, shifts its eyes down and to the right in a frighteningly natural movement that makes the sculpture seem to come alive. The first time I turned the hand gear and Oracle opened its eyes and glared at me, I instinctively looked behind the face to see if anything (or anyone) was behind it…. 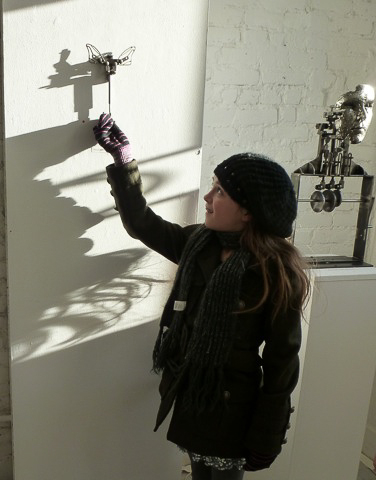 Exploring movement in nature and animating steel figures is the focus of Ms. Limpert’s new Brooklyn show at ART 101, which opened January 12th.  It is a joint show with painter Patrick Whalen and, in fact, the two are well paired. Mr. Whalens five figurative drawings are echoed in Ms. Limpert’s airy sculptures, which appear to be “drawn” by twisted steel piping. But, it is Ms. Limpert’s work – four life-size sculptures, four medium-size pieces, and dozens of smaller sculptures – which dominate the small gallery space. Both artists have been in previous Brooklyn shows.

Ms. Limpert, 44, a tall, quiet woman with a husky voice, grew up in New York City, and it is the city’s constant movement – cars, bikes, subways, construction and impatient people – which continue to inspire her.

“I have always loved to watch things move,” she said.

In “Baby” (2004), one of the older works in the show, a doll’s head is placed on a shoe-box size armature of moving parts that suggest a baby’s body. The head bobs back and forth as if the baby were squirming on its back. “I” (2004) is a life-size figure made of twisted steel pipes in which only the eyes of the figure move. They do not move all the time. Only when a viewer approaches the figure closely and triggers a sensor do the eyes begin to shift and dart irregularly. Again, as in “Oracle,” the eye movement is incredibly realistic and a bit unnerving.

For the past 11 years, Ms. Limpert’s day-job supporting her sculpture, has been as an animation coordinator at Spaeth, a New York design shop, which produces Christmas displays for the major department stores. There, Ms. Limpert learned about electricity, which powers her animated sculptures, and also developed an interest in unpredictable movement unlike the monotonous motion of most of her display work. And, rather than cover up the armature as display often requires, Ms. Limpert likes to show the machines she has so painstakingly created for her sculptures. She thinks they’re beautiful. (And, in her hands, they are).

In “Mechanical” (2004), the upper body of the figure is reduced to two moving rods. Two rods are suggestive of arms; two of the torso, rotating right and left. “I had thought about adding something to the rods,” said Ms. Limpert, “and then I thought ‘why?’ Why not keep the piece simple and let the motion speak for itself.”

Even when Ms. Limpert’s pieces are not moving, they seem animated and as if they are about to move. 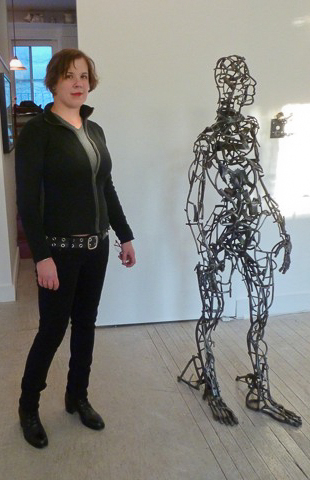 The stance of “3rd Generation” (2008) another life-size figure, is very active with one foot in front of the other and the torso twisted. The feet have Mercury-like projects on them as if the whole body might take flight. Ms. Limpert is a great fan of Greek and Roman sculpture and takes much inspiration from it, including the typical contrapposto stance of the classical works in which the figures twist on their own vertical axis. Even some of the small, stationary pieces have movement, such as “Flying Figure,” a small, six-inch steel figure mounted on a wire to a wall. Touch the wire – and the figure does indeed “fly.” 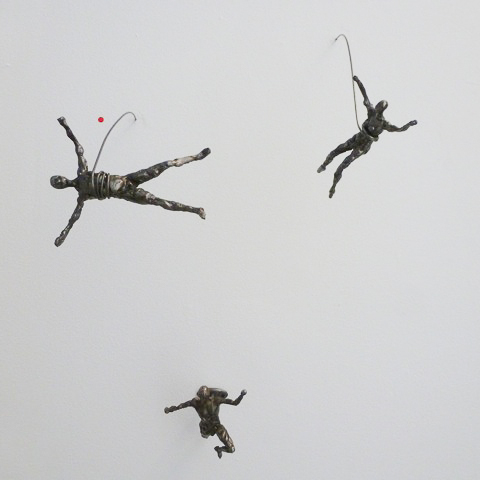 “Typically, people are not suppose to touch works of art, but I like the idea of viewers interacting with my pieces, “she said.

Her art then is experiential – with each viewer moving her pieces in their own particular way creating their own special experience, no two the same. And, I suspect if I were to visit the show again, my second experience might be quite different. 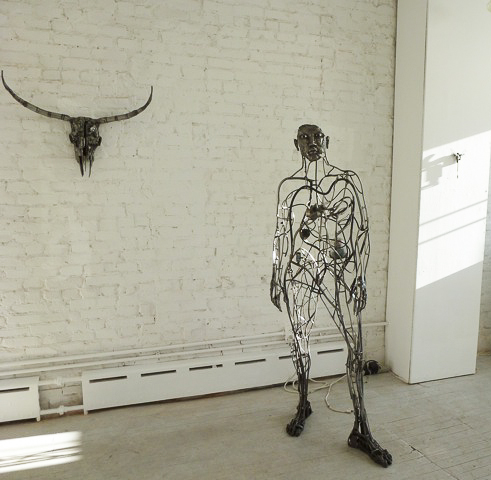