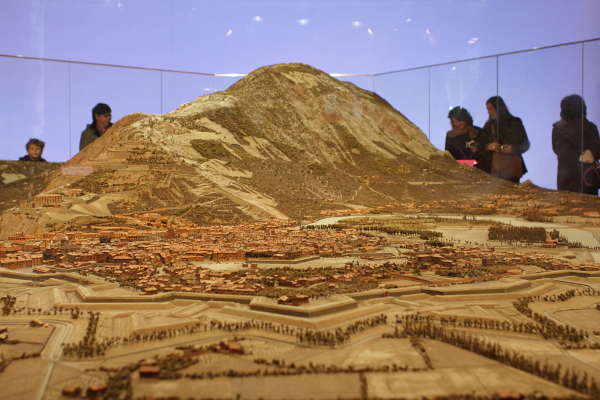 Architecture students quickly learn the value of a good model. Although nothing expresses the true intention of a design as well as a model, especially for the general public, the life of a model is often sad and brief. After the big presentation day, the little pieces of cardboard and wood, so carefully carved during too many all-nighters, begin to deteriorate in closets and attics. Models are too delicate for a world built at 1:1. Once dust starts to appear, the garbage can soon follows.

The sixteen huge city models, called plan-reliefs, on exhibition at the Grand Palais are among a hundred to have avoided the royal garbage can. Between 1668 and 1873, about 260 more and more detailed plan-reliefs were built for the pleasure of the kings and emperors of France. They moved with the center of power, first kept at the Tuilleries, then in the grand gallery of the Louvre between 1700 and 1777 before finally ending up at the Hôtel des Invalides, where they remain today. Their ostensible purpose was to help visualize the construction of fortifications at the frontiers of the kingdom, above all in newly-conquered cities. Thanks to the fine, even luxurious quality of their materials (silk for the canopies of the many thousands of trees) and their enormous size, (the model of Cherbourg, for example extends over 160 square meters), the plan-reliefs were masterpieces of ultra-realism. These are not the slick, abstract models of contemporary architects; on the plan-reliefs every window is shown, every color is the result of reconnaissance in the field to collect samples of sand or make watercolors of the true colors of a city. The process extended close to anthropology — the exhibition includes a detailed report on the daily life of Briançon, of great historical value today. From a military perspective, one can understand the need for a true representation of the terrain, but this accumulation of detail clearly goes well beyond the immediate military purpose of the models.

The Grand Palais exhibition follows the geographic, historical, military and artistic aspects of these singular relics. For the French of a more peaceful Europe, the plan-reliefs have lost their military and propagandistic urgency (although “urgency” is perhaps not the best word to describe models which each required years of research and construction). Like the fortifications themselves, the plan-relief is an example of a military tool with non-military value. Thanks to them we can better understand these cities and their history. The plan relief freezes the cities in time (and one, the unbuilt city of Neuf-Brisach (Haut-Rhin) freezes a sensibility — the ideal city — more than a real place). Cherbourg and Brest, two cities heavily damaged during World War II, are the most obvious examples, but all the plan-reliefs on display are models of lost cities. The point at which fortifications (or city walls in the case of Paris) ceased to define cities was a point of no return for urbanism. The city walls and fortifications of France have conserved an urban density in these places, with good consequences for their development today, centuries after the walls have lost their purpose. 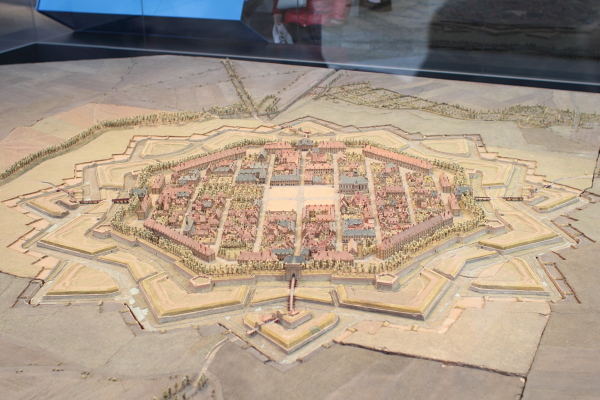 Alas, the Grand Palais exhibition is on for only a short period (and it’s just as cold inside as out). The plan-reliefs can be seen at the Invalides (or on the exhibition’s excellent website) but the design of this exhibition is particularly well-conceived. The exhibition manages the difference in scale between large models and an even larger building by housing the plan-reliefs in pavilions which protect these delicate objects while allowing the public to view them from a variety of perspectives. The biggest success, literally, is the état-major map of France (1881) mounted at a scale of 1:40,000 on the floor at the center of the space. At any time, groups can be seen clustered around their ancestral villages.

The digital displays are numerous but well-integrated and well-chosen. Among them are two “Liquids Galleries,” panoramic versions of Google Earth. One can indeed make a comparison between Google’s nearly obsessive recording of the world and the sensibility behind the plan-reliefs.  Perhaps what the screen-relief is missing is called poetry… 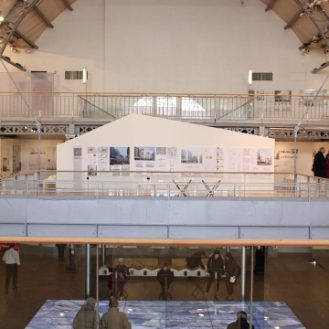