Before Diaghilev decided to bring Russian art to the west, starting with his exhibition of Russian art in Paris in 1906, in 1908 bringing Chaliapin to Paris to sing Boris Godinov, and then his formation of the Ballets Russes, first performing in Paris in 1909, unadulterated, purely Russian art was little known or appreciated outside asia. Vast Russia, except for its toe in Europe was perhaps considered something of a cultural backwater in Europe. Diaghilev didn’t hold back in bringing this unadulterated Russian art, also discovering and hiring young or little known artists — like Stravinsky — and this was part of his art’s huge appeal in west to this day. So when Stravinsky visited the far, far East — Australia — in 1961, it was perhaps not so far from his roots nor so incongruous. Traditional indigenous Russian or central asian art was often an influence in the set designs and style of Bakst, Benois, Golovin, Roerich and the others, costumes sometimes used original traditional textiles (like the ikat fabrics bought from nomadic traders at St Petersburg markets for the costumes for the Polostvian dances from Borodin’s Prince Igor), the choreography was sometimes classical in the best Petipan Franco-russian tradition preserved in the imperial Maryinksy school, but was often entirely new in style, especially Vaslav Nijinsky’s for the Rite of Spring, though often borrowing from traditional, indigenous Russian dance, as in Firebird and Petroushka. Western audiences seemed unconsciously to understand this bizarre new art and went crazy for it, famously starting riots and booing, also becoming most fashionable tickets to have.

The ballets were integrated works of total art, so what happens when we separate the music from the dancing and the art? Part of the sublimity of the ballets was no doubt the care and attention given to the music. It is still debated whether the audience riot at the première of the Rite of Springwas caused by the music or the choreography or the effect of both in combination; unfortunately the choreography is lost. Even if we could see and hear the ballet exactly as it was, I don’t think an audience of today could react in the same way, or “appreciate” it in the same way. If it was true and sublime choreography, “astoundingly beautiful” as Valentine Gross said at the time, then the choreography, as all sublime choreography must, stemmed from the same place the music came from, or at least from something like in the artist and his muse. In either case there is surely more to great, sublime music or choreography than its capacity to incite a riot, or create a nifty, repeatable historical anecdote.

Ravel’s Mother Goose Suite was originally four-hand piano music but was not written for the Ballets Russes, though its ballet form, composed for “The Children’s Ballet for Mimie and Jan Godebski” had its première in Paris in 1911, the year after Firebird‘s, and about the time Diaghilev commissioned Daphnis et Chloë from Ravel. For many years Ravel tried to get Diaghilev to pick up his La Valse for a ballet too, but Diaghilev thought it unsuitable for ballet, though it was one of his Ballets Russes choreographers Bronislava Nijinska who in the end choreographed La Valse for the Ida Rubinstein Company in 1929. The Mother Goose music may have taken some time longer to get ‘adult’ choreography in the 1930’s (the original is lost, so who can now say?) to do justice to the music, but when played in its concert suite form, it is hard to keep the image of the theater out of one’s mind, especially in all the chinoiserie and some of the more leisurely and visual sections. The playing here, with rather smooth, sometimes borderline soupy strings seemed in a way trying to compensate for the missing stage. After the interval, the clarity and contrasting texture which are more characteristic of the Sydney Symphony came out, in fact Pintscher’s interpretation of the Firebird Suite was quite distanced from the ‘lush romantic orchestral sounds’ which is often used to peg the piece as early Stravinsky. In the Violin Concerto however, certainly more what one would call Later Stravinsky, the orchestration sounded rather flat, and there was a similar smooth non-texture in the strings, overall sounding as if the ‘boxy’ americanisms in the music were being highlighted. Isabelle Faust went into the piece with great energy and enthusiasm to the point of sounding like a theatrical fairy in fluttering about the weightier orchestral sounds, grounded especially by the enormous string sections. Somehow the music, though, whether Stravinsky’s writing, his style influenced by his adopted country after a long exile, or whether weighed down by Andrew Ford’s compulsory spiel beforehand, geared, perhaps too lowly, toward the mostly youth and school-group audience, (admittedly my ears were a bit numbed by the booming microphone voice and feelings made a bit grumpy to be told by him how to feel about the piece), or a combination, never seemed to let itself reveal very deep humanity.

Ravel in Monfort-L'Amaury with Maurice and Nelly Delage, 1925.

Matthias Pintscher’s own piece, towards Osiris, did provide a buffer from Andrew Ford’s second pushy spiel which was leveled at it and the Firebird Suite, and it, though missing its companion piece Osiris and unfortunately too small a piece in itself to understand much about the composer’s music, was powerful enough and sturdy enough, at least in orchestration, to be resilient to school-roomish spiels. There was a fair bit of rude whispering and talking over the music which is quite a loud piece generally with varied and exotic percussion and rather biting strings and brass, but with a large dynamic range. Trying to listen to the music unburdened of words, on its own (the piece’s title is vague and mysterious enough to resist becoming anything like a linear program), it had wonderful energy, and an orgiastic quality at least fitting to Osiris who was of course the Egyptian Dionysus. The at times shattering sounds, the mythological origin of the piece (and hawk-headed Horace is Isis’ and Osiris’ son) tie it not-too-tightly to the thread of Mother Goose and the Firebird, both of which use the egg imagery of resurrection.

Firebird here, like towards Osiris, had more interestingly textured and tightly toned strings. Pintscher started with a fine even, forward walking (but not rushed) tempo, in the rising and falling simultaneously plucked and bowed bass arpeggios. He strongly underlined the sudden transition to the middle section (corresponding with the appearance of Kostchei in the ballet version), eliciting surprise and more chatter from the audience, though this was not necessarily intentional. The play between the brass and woodwinds, especially oboe, bassoon and clarinet was thoughtful and well balanced, as was the play within the brass between trombones, trumpets and horns. Using the orchestral textures to advantage towards a deeper, more mysterious purpose which true fairy stories have, and music has at its soul in a way nothing else does and which words cannot describe, rather avoiding the more clichéd, smoothed over, cinematic sort of music enslaved to a linear narrative, worked very well. 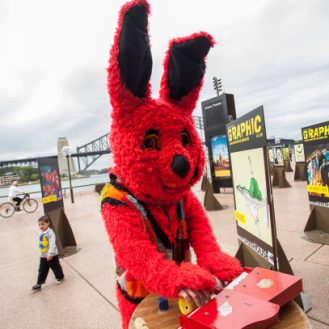 Cage in the Can: A John Cage Centenary Festival at the Sydney Opera House with Bang on A Can All-Stars