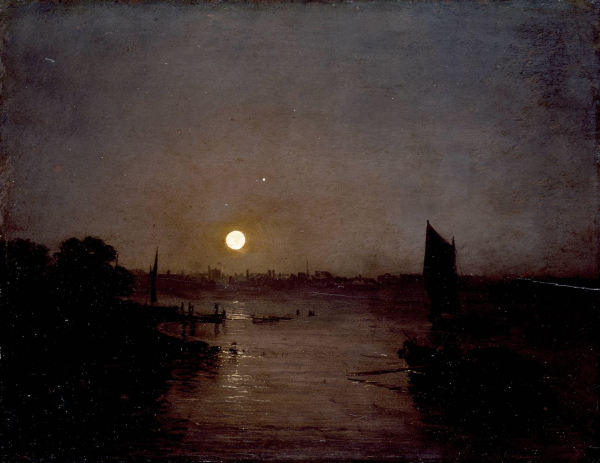 A penny for the old guy. The original London Eye wasn’t a Ferris wheel on the Thames, but J.M.W. Turner, whose visual genius and all-encompassing vision engulfed everything in its path. Until the electroshock treatment applied by Francis Bacon, generations of British painters were subsumed by him. Paying obeisance to the great man is both a duty and a delight when visiting Tate Britain, and now the Turner galleries have been completely rehung for the first time since the mid-Nineties.

He was born on Shakespeare’s birthday in Covent Garden and carried the wrong accent all his life. When Constable, the other great landscapist of the era, met him for the first time, he said that Turner was uncouth, “as expected,” but had a great mind. Indeed. In the new galleries one of the most fascinating rooms pairs six or eight Constables with various Turners. Born within a year of each other, in 1775 and 1776, Turner was the precocious meteor and Constable the plodder. For the opening of Waterloo Bridge in 1817, a great ceremonial event after the defeat of Napoleon, Constable wanted to curry favor with George IV, who inaugurated the bridge, but it took him fifteen years to devise a composition that satisfied him, by which time the king was dead. The painting is big and impressive, showing parades of onlookers framing a Canaletto-like expanse of sky and river. By contrast, when Turner attended church and a banquet where George IV was present, his quick sketches, full of vivacity and color, probably happened between the cheese and the Madeira.

The newly hung galleries can’t help but open your eyes. Turner left hundreds of unfinished paintings to the Tate and thousands of drawings and water colors, so any angle a curator wants to take can be illustrated, and still the torrent of imagination has only been caught in a teacup. At 21 and 22 Turner made his first Royal Academy pictures, both depictions of moonlight, a notoriously difficult illumination to capture on canvas. You have to lean in to squint at the astonishing detail that he has carefully inscribed in subtle shades of black and brown, a really virtuoso effect. But then, with Turner as with Paganini, one expects the virtuosic as his stock in trade. Quite literally he might do an avalanche before lunch and a cataclysm after tea while sketching in the defeat of Hannibal on the side. 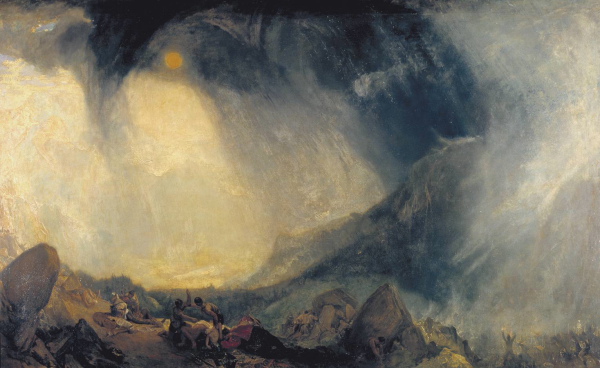 Turner was jealous about keeping his artistic methods a secret from his rivals, and despite boasting that he had been lashed to the mast of a ship for four hours to capture the feeling of a storm at sea, his vertiginous vortices were mostly achieved in the studio. Occasionally he set up a temporary painting shed, usually while visiting one of his noble patrons, and then a glimpse or two was caught of him at work.  The most remarkable account tells of Turner setting up several canvases in a row to work on simultaneously. He did this by applying one color of paint to each canvas, going down the line one after another. Then he’d pick up a second color, return to the first canvas, and apply it down the line until the works were done — or almost done. 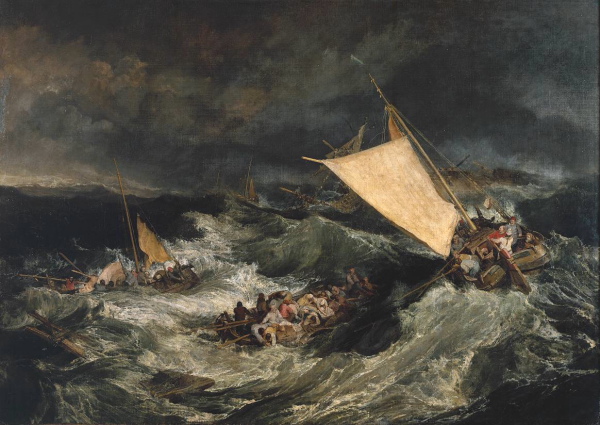 He liked to finish his paintings at the last minute, often after they were hung in exhibition. One time Constable showed one of his slow, painstakingly worked out landscapes near Turner’s entry in that year’s Royal Academy show. Turner popped round, added two strokes of fire-engine red, and achieved a brilliant effect. Constable mordantly remarked that Turner had shown up and fired off a shot. The twentieth century was much taken with the way he prefigured Impressionism and modern abstraction (a claim that makes some art scholars huffy, since Turner’s aim wasn’t the same as Monet’s or Whistler’s or Graham Sutherland’s), so it’s a surprise to realize that his genius was market-minded, practical, and even conventional in choosing subjects. Turner followed the money. 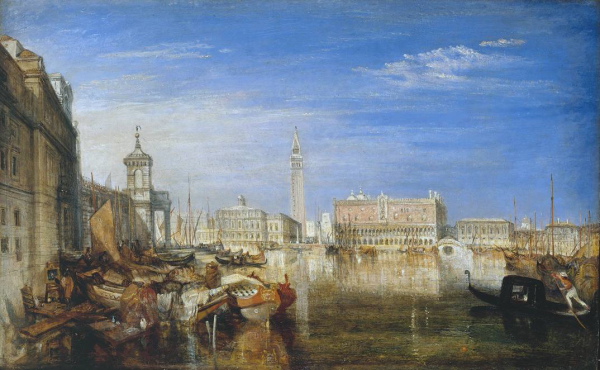 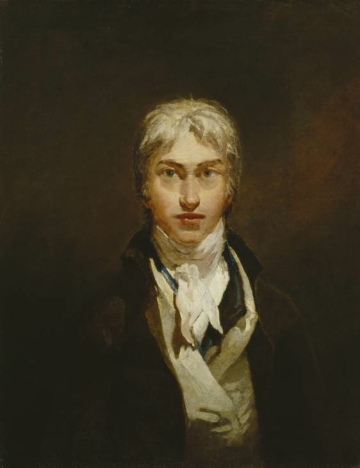 He did sweeping renditions of scenes from ancient history and the Bible because Titian, Salvatore Rosa, and Claude Lorrain had made them popular. In a new gallery titled Turner as British Artist, we get genre scenes of cows fording a stream and a blacksmith’s shop (done in precise detail out of the Delft school, complete with convincing chickens). His first painting of Venice, a place he didn’t reach until his forties, was a tribute to Canaletto done in the older painter’s style, with the addition of Canaletto himself sitting in one corner painting the same scene on a canvas that is already framed. Two routes to popular success, however, didn’t appeal to Turner, it would seem. He almost never painted nudes — the Tate has had to fetch one from the basement that shows a pale, barely filled-in reclining odalisque against a completely bare dun background — and he rejected portraiture. The most striking exception is his own self-portrait, done at 21, where he dolled himself up to look like a blond Hollywood version of the perfect young aristocrat. The impersonation would be impudent if it weren’t for the artist’s inescapable deep eyes. 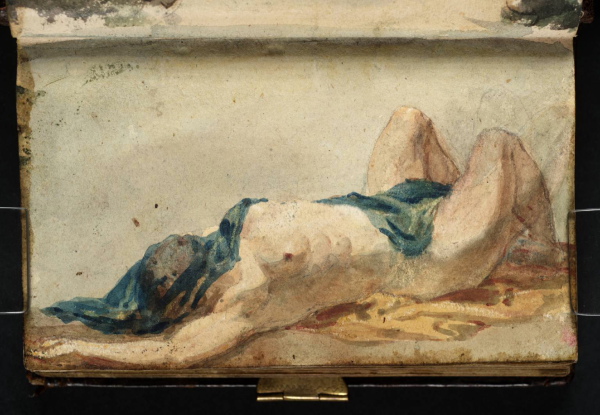 These new galleries are a delight because they are intelligently arranged and contain descriptive notes beside each painting that are succinct, interesting, and devoid of artspeak. Turner, like Tintoretto, painted by the acre, and this led to repetitious recombinations of picturesque elements: tufted tress out of Lorrain, tumbling mountains, vast vague imaginings of Troy, Rome, and above all, Carthage. But he never bores and always amazes standing before the sea. Turner made the ocean so turbulent, filled not just with storm-tossed waves but violence, wreckage, sea monsters, glorious galleons, rust buckets going to their grave, even howling blizzards like a frost-bitten Last Judgment — in short, a whole world floating in watery dreams — that it’s easy to forget how rigorous a mind it took to conceive and execute these depictions.

Bringing form out of chaos while keeping the thrill of chaos was his unique achievement. At the end of his life Leonardo da Vinci attempted the same thing, but in miniature, when he filled notebooks with sketches of running water. Nature’s eddies are fascinating because they capture the eye without allowing the eye to rest on anything tangible, much less grasp it. Some commentators have been baffled by Leonardo’s obsession and consider it, politely, a huge waste of time and talent. In Turner’s hands, the impossible was achieved beyond anything Leonardo left behind. Snow, wind, and steam pass ghost-like through our existence. Turner makes them as haunting as they really are, poised all around the solidity of everyday things. Like light, the most mystifying elements in Nature are fleeting and uncapturable. But Turner was a master of light, too, which is a requisite if you aspire to be the Creator’s appointed creator. 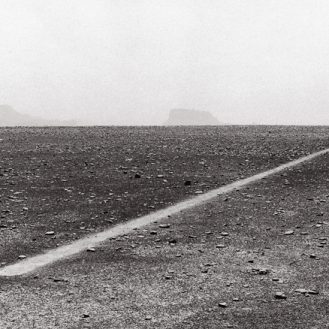 Why I am a NiMBY* 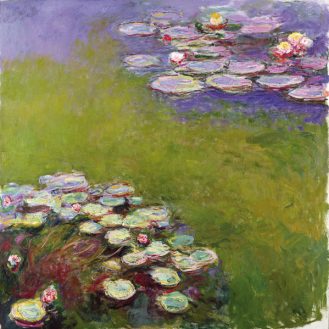