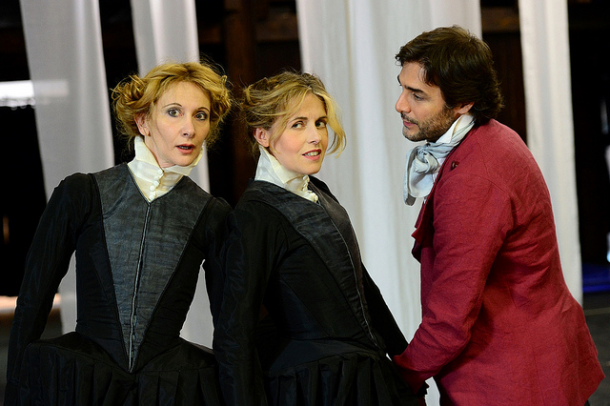 If you ever need proof of Shakespeare’s universal appeal, stop by Rome’s Globe Theatre. Within a single evening you’ll be convinced that the Bard, disarmed of dactylic hexameters, can still speak to everyone and anyone.

All the more so to Italians when it comes to As You Like It (Come vi piace). Their temperament — irascible, passionate, effusive — stands opposite that of the English but squares precisely with what Shakespeare wanted to lampoon in this subtle masterpiece. Rosalind (Melania Giglio) is so sickly in love with Orlando (Daniele Pecci) that she can barely maintain her act as “Ganymede” in his presence. Duke Frederick (Nicola D’Eramo) hates his brother (also played by D’Eramo) so fiercely that anyone who reminds him of Duke Senior is mindlessly banished from the dukedom. Silvius (Patrizio Cigliano) dotes on Phebe (Barbara Di Bartolo) so cloyingly that the audience would gladly join her in strangling him if only he weren’t so hysterically funny. Each character is a caricature of Italian emotional excess, and no one can make fun of emotional excess better than the excessively emotional Italians.

In this production, however, caricature does not squelch the humanity of the characters. Only by exaggerating their pitiable weakness do the actors convince us that we are all Italian. Each of us has been irrationally angry, foolishly love-struck, and frighteningly obsessive. By loading these characters, we unload our impulses. By laughing at them, we laugh at ourselves, and in doing so, we learn to accept the traits we cannot change and to change the ones we can. If all the world’s a stage, we may not chose the roles we play but we can still play them as best we can.

Director Marco Carniti took a gamble (a trasgressione in his words) with this production, turning it into a quasi-musical. The result is simply pazzo (his term again). Crazy indeed, but enormously successful. Arturo Annecchino’s score features delightful and haunting melodies, all perfectly matched to the voices of the “singing actors.” Clara Galante, exceptional as Hymen, takes the yeoman’s share of the long, sinuous phrases that give a strange air to the Arden forest. She yodels, moans, and croons above the chant of the “chorus” behind her. The sung portions are not limited to those marked “sing” in Shakespeare’s script. Rather, Annecchino and Carniti introduce song in an arioso way, allowing the audience to savor a mood or reflect on the plot through song. Although Agostino Lombardo’s Italian translation is faithful to Shakespeare’s English, Carniti takes the freedom to turn the epilogue into a prologue and to introduce lyrics by Alice Sforza that conform to the genre of a musical.

The entire movement of the play from rancor to love is expressed in terms of tragedy and comedy. The initial scenes take place within a fence surrounding the stage and serving both as a cage and as the arena in which the wrestling match between Charles and Orlando takes place. The thrust section of the stage lies beyond the cage and signifies the outside world. It is from here that Rosalind first casts eyes on Orlando. They instantly fall in love, but not foolishly. Rosalind is conscious of the fact that the “game” she and Celia (Pia Lanciotti) have decided to play is suddenly not very amusing. She musters up all her might to stifle the stirrings in her heart. Giglio’s Rosalind is scarily smart but not conceited. Whenever she is on the verge of giving into her feelings, she submits herself to Celia’s less intelligent though no less accurate reasoning.

Pecci does a magnificent job of giving Giglio space to develop Rosalind’s character. His Orlando is cultivated despite his lack of education, and this frustrates Rosalind as much as it does Oliver (Luigi Tabita). Pecci tempers Orlando’s innocence with just the right amount of petulance when he grows tired of pretending Ganymede is Rosalind. Whereas those around him philosophize about pastoral life, Orlando wearies of it since it prevents him from obtaining his heart’s desire.

The resolution of As You Like It seems to happen all too quickly. Yet this production makes perfect sense of it. It’s not simply that Rosalind is clever enough to trick the others into love; rather, she is exhausted — as they are — by the reign of unbridled passion and the lack of clear-headedness. In talking sense to the others, she talks sense to herself, making her final “lesson” to Orlando a scene highly charged with emotional and intellectual energy. She cannot get the assurance she needs that all will be well with Orlando but then faults with herself for expecting such an assurance in the first place. Love will remain mezzo pazzo, just as half our life is better expressed through song.

Italians can be dominated by their feelings, but at least they know the importance of feeling. Shakespeare was Italian in this sense. The philosophical ideas he parades and parodies in As You Like It are juxtaposed with the same irrational desires that make us wary of philosophy. This production entertains precisely in order to draw us into philosophy. We enter the mind through feelings. Carniti and Annecchino use the script to explore how poetry and prose work together to enable understanding. The stage is full of playfulness, but playfulness with a purpose. Annecchino’s music is astonishingly simple, but you don’t go home humming the tunes. He writes poetry in musical pitch. He and Carniti engage in a quest for the right balance between music and words to convey thought through feeling and feeling through thought. You remember what the characters were singing about, but not how they sung it. The purpose of the music is to carry us back to our infancy and the love that surrounds it. It allows us to discover ourselves by seeing in the characters whatever we like. The vulnerability required to make the journey is evidenced by the actors singing as “non-singers.”

This openness to vulnerability is what effects the radical transformation of Rosalind and Celia by the end of the play. In Ferdinand’s court they are adolescent adults, clinging to their childhood in order to defend themselves from the dysfunction surrounding them. At one point they frolic in their pajamas like thirteen-year-olds, indulging in the sort of sleepover-party parents inevitably regret the next morning. By the end of the play they turn into adult adolescents, unafraid of their feelings but controlling them just the same. For the first time they are free to gaze into the eyes of their lovers, proving they are human after all. This production creates the space for our imagination to run wild and to think that anything is possible: even for an Englishman to fall madly in love with someone he’s never met and an Italian to coolly choose a lover he is all too familiar with. 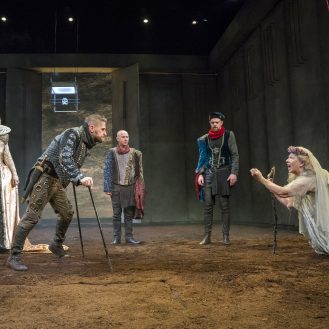 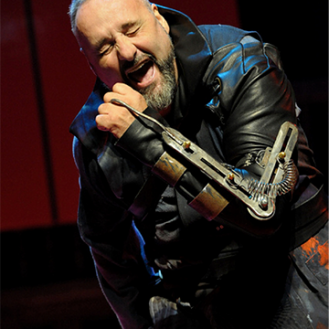 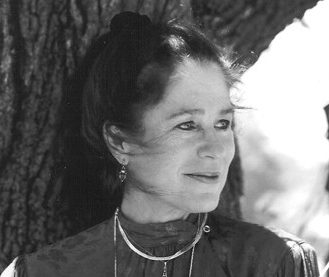 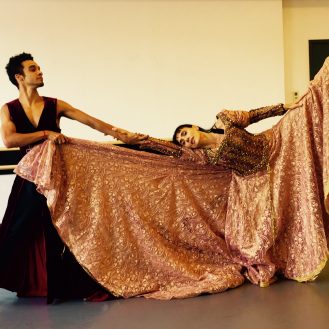 ​Thorns of the Crown, Choreographed and Staged by Ramon Oller