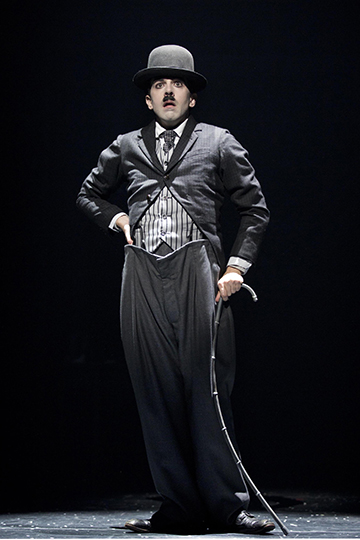 How many redeeming features does a musical need to overcome its flaws? How much joy must it create among its audiences for word-of-mouth to override mixed critical reviews? In spite of both flaws and mixed reviews, “Chaplin” is succeeding on Broadway. It deserves its popularity. But love isn’t blind.

The musical is about Charlie Chaplin discovering then discarding his Little Tramp character and finally finding himself. It’s about the rewards of silence on the screen and the perils of speaking out in public.

Chaplin’s mother Hannah was a London music hall singer who became unhinged —alcohol according to this show, syphilis according to the 2008 biography of Chaplin by Stephen Weissman, M.D., a psychiatrist. Hannah abandoned Charlie and his brother Sydney at an orphanage when Charlie was seven. Eventually Charlie played music halls himself, was discovered by Max Sennett and made “flickers” (silent films) in Hollywood, where he invented the Little Tramp character. His success allowed him to become a director and establish his own studio. In 1921 he wrote the hit movie The Kid starring himself and Jackie Coogan, which dramatized his own childhood abandonment. When he refused to meet with Hedda Hopper, the influential gossip columnist, she used the speeches he was giving across the country to brand him as a Communist. Having remained a British citizen during his entire career in the United States, he was refused re-entry after a trip to London. He moved to Switzerland with his fourth wife, Oona O’Neill, daughter of the playwright, with whom he had eight children. Chaplin returned to Hollywood in 1972 when he was 82 to accept an honorary Oscar for his “incalculable effect in making motion pictures the art form of the century.”

The story ties together neatly—too neatly in this stage presentation. So intent is the book (by Christopher Curtis and Thomas Meehan) on moving the story forward that it rarely pauses to delve into its characters. Each scene is short, wrapped up, pat. There is little room for the audience to become involved. For example, in a scene where Chaplin made Coogan cry on camera by sending his mother off the movie set, the audience applauded the child actor rather than crying along with the character. Perhaps it was the chemistry of this particular audience. Perhaps not.

The plot-driven speed of the show might be acceptable if more of the songs and lyrics, by first-time musical show composer Christopher Curtis, were able to convey the characters’ depth and emotions. As it stands, neither the songs nor the choreography, by the respected Warren Carlyle, who also directed, are exceptional. 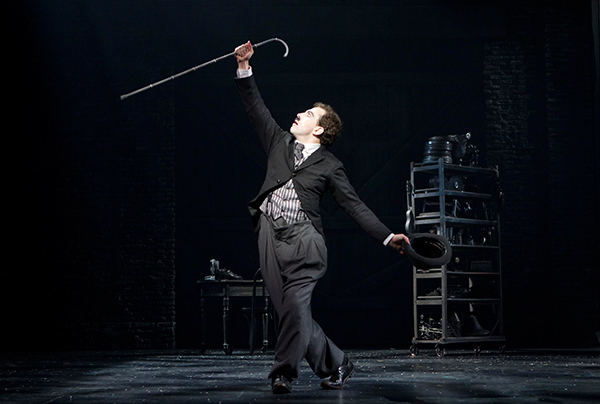 What is working well? More than enough. Let’s start with Carlyle’s staging. It’s entertaining and constantly moving, sometimes with action above the stage when Chaplin is on a tightrope or in a boxing ring as Chaplin’s first three wives get knocked out of his life.

The costumes (by Amy Clark and Martin Pakledinaz) and lighting (Ken Billington) are almost all in black and white and shades of gray. One might expect this to be monotonous. It is not. It fits the era of silent films, and keeps us in the time period.

The use of film (by Jon Driscoll) is ingenious. Instead of a curtain, a screen is on the stage as the audience enters showing Charlie Chaplin dressed as the Little Tramp. Or is it Chaplin? Maybe it’s the star of the show, Rob McClure. Is it a still photo or did we see Chaplin breathe? It is the motion added to this picture that gets us into the show itself. Throughout, actual footage of Chaplin films is integrated into the action seamlessly.

Some of the supporting performances –Michael McCormick as Mack Sennett and other characters, Jenn Colella as Hedda Hopper, Hayley Podshun as Mildred, Chaplin’s first wife, and Zacharary Unger as Young Charlie and Jackie Coogan—are excellent. However, any of these actors could be replaced with equally talented performers and not be missed.

Rob McClure is a must. He is the major reason to see the show. This thirty-year-old is captivating as Chaplin. He is extraordinarily talented—graceful with exquisite comic timing. In my New York Arts review of McClure in the title role of the City Center Encores production of Where’s Charley? I said McClure’s “magnetic energy, and his sheer joy of being on the stage … make his performance irresistible. When he wasn’t on the stage, the show wasn’t quite as compelling.” The same can be said for his performance in “Chaplin.” Bravo to the producers and director for casting this relatively unknown talent in a major Broadway musical.

After the curtain calls, when McClure was asking the audience to donate money to the annual holiday fund drive of Broadway Cares/Equity Fights AIDS, one of the cast members interrupted McClure to tell the audience that after the performance McClure would have a drawing of himself hung on the wall at Sardi’s restaurant. This is a tribute that says an actor has arrived, has become a star. Even through his white makeup we could see that it was McClure himself grinning from ear to ear. There will undoubtedly be many more accolades.

“Chaplin” was originally presented in the 2006 New York Musical Theatre Festival. It was further developed by and premiered with McClure in the title role at LaJolla Playhouse. 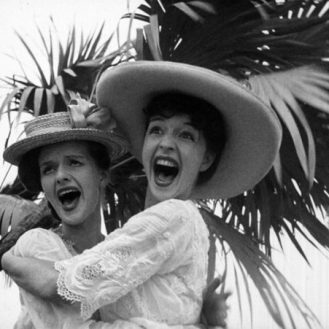 Orson Welles’ Too Much Johnson, restored by George Eastman House 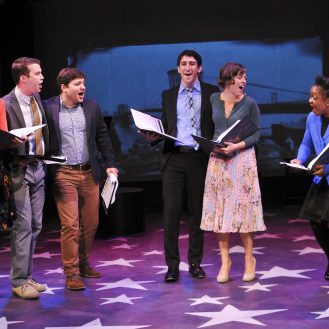