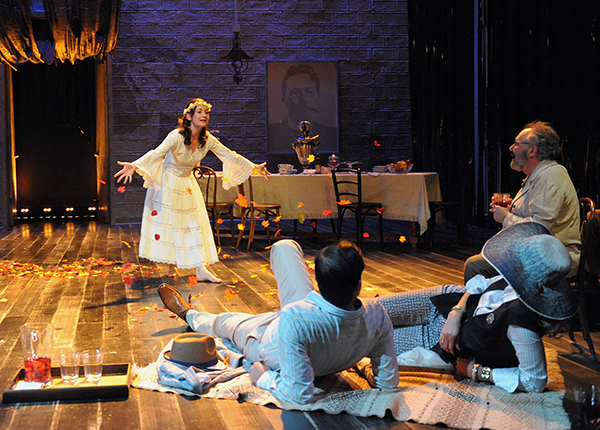 This is a bit of a sacrilege, but I have always found Anton Chekhov’s much beloved nineteenth-century play, The Seagull, bordering on a parody of itself. When Masha, the estate manager’s daughter, enters in the opening scene of the play dressed all in black and announces she “is in mourning for her life…” how can we possibly keep a straight face? Chekhov couldn’t have imagined how shamelessly French torch singer Edith Piaf would overuse the line in the 1930’s with her own infatuation with black clothing, making this an even more melodramatic line for today’s audiences. So, from my perspective, it does not take much to turn The Seagull from serious, revered Russian classic to clever, side-splitting spoof. Oregon-born playwright Aaron Posner achieves this end with grace and good humor in his new play, Stupid, Fucking Bird, presented by Wool​ly Mammoth Theatre Company in Washington, DC through June 23, 2013. The play opened May 31st.

The title is perhaps the play’s only problem, suggesting that the adaptation might be crude and off color. Nothing could be further from the truth. It is totally charming and sophisticated, beginning with the clever set, designed by Misha Kachman, a talented Woolly company member and a native of St. Petersburg, Russia. With a nod to Chekhov’s wish for more naturalist theater, not the three-walled boxes of his day, Mr. Kachman blasts the set completely open in the first and third acts to the theater’s brick back wall. The wall is decorated with portraits of Chekhov and in one corner a perfect paper “cloud,” a reminder of the classical Russian approach to set design of the master’s plays. Kachman closes the space down completely in the introspective second act, presenting us with a small, dark, dated country kitchen, where the interior lives of the characters are revealed like flickering shadows in a puppet play.

Chekhov’s main characters and themes are all there, both simplified—and amplified—in Posner’s play. Emma, the vain, selfish, aging actresses who loves attention and is not afraid to ask for it; Con, her son, a struggling writer, desperately searching for success in love and in his art—but succeeding at neither; Nina, the young, naïve nineteen-year-old who longs for a stage career; Doyle, the famous writer, companion of Emma and cad who seduces (then abandons) Nina; Mash, the depressed estate manager’s daughter who hates her life and pines after Con who himself is struggling vainly for Nina’s attention; Dev, the nerdy school teacher (and player’s narrator) who finally wins over Mash; and Sorn (a combination of Sorin and Dorn in the original Seagull), doctor and brother of Emma who functions as listener, confidant, compassionate outsider. The characters circle each other, collide and spin apart in a dance carefully choreographed by director Howard Shalwitz to create laughter out of the pathos of unrequited love and creative angst.

“We need new form, new forms that open new possibilities,” laments Con before presenting his fledging play to his mother whose approval he desperately craves. She laughs at his banal efforts, sending him into a downward spiral. Later, he is looking for catharsis, calling it by its name as if it were a lost dog.

All of the actors are perfectly tragic and comic at the same time, although I felt in the preview performance that I attended, the audience laughed as if it were a guilty pleasure. (Maybe we shouldn’t be laughing?) My sense is the cast will become more adept as the run progresses at the superb timing comedy requires; the laugh lines will become clearer. Nina has always been the most demanding of Chekhov’s roles, requiring an actress to look innocent and naïve in the opening scenes; weary, older, defeated in the latter ones. Katie Debuys who plays Nina has appeared in a number of productions at the Folger Shakespeare Theatre in DC has the added challenge of Posner’s comic veneer to the role, which she seems to be struggling with in the performance I attended. The rest of the cast was pitch perfect. Kimberly Gilbert as Mash and Darius Pierce as Dev delightfully present one of the main themes of the play—that life goes on despite all the troubles and set backs—in a duet, written by Aaron Posner with music by James Sugg, the show’s sound designer.

Ms. Gilbert strums a ukulele and Mr. Pierce plays an electric guitar as they sing:

Mash: When you’re just cooking
When you’re not looking for a change
It’s strange,
How hearts and minds can rearrange
Such an odd exchange…
When life happens

Dev: When you’re not trying
When you’re just crying on the stair
It’s not fair
The way the act of simply breathing air
Can be hard to bear
But then life happens…

Unlike Chekhov’s ending, Posner tells you exactly what happened to all the characters in the play with the exception of Con, the troubled writer, who commits suicide in the original Seagull. Happy or sad, life does go on, as the duet says, and that’s a great comfort. Stupid Fucking Bird is a feel-good play that should not be missed. And Chekhov himself would be pleased. He always spoke of the need for “new forms” to invigorate the theater. And this parody/spoof is probing interesting, new theatrical territory that other directors and productions will want to explore. Howard Shalwitz and Wholly Mammoth are to be commended for taking a chance on a new play and starting the conversation.