Detroit, a play by Lisa D’Amour, which opened last Sunday at Woolly Mammoth in Washington, DC, is not really about Detroit, except as a potent symbol of the fading of the America dream. The play is set in suburbia, any suburban area around any major America city, where the promise of the good life with picnics and Saturday night dances and well-scrubbed children is harder to achieve in the current economic malaise and intrusion of violence into quiet, middle class neighborhoods everywhere. 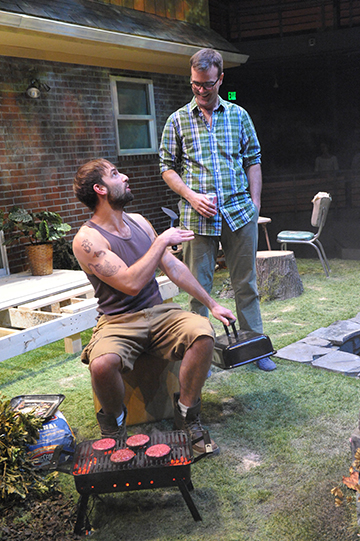 D’Amour, a native of New Orleans and University of Texas graduate, wrote Detroit in 2009 as the Wall Street meltdown of 2008 was unfolding. The two couples in the play are both suffering in the wake of that crisis: Ben and Mary are struggling to keep afloat as Ben, recently fired from his job, is trying to start his own business; Kenny and Sharon, recovering drug addicts, have just moved into a house of their own for the first time but can’t afford any furniture. The couples meet and talk and strain to get to know each other over shared barbecue in their adjoining backyards. Innovative set designer Tom Kamm has totally reconfigured Woolly Mammoth’s theater space, seating the audience in two sections around the set of two abutting backyards framed by the modest pre-fab house facades. The set resembles a tennis court with actors behaving a bit like balls, bouncing back and forth between the two yards.

In the first scene, the couples talk about furniture and foot warts and financial planning and the rough edges of the concrete patio slabs until Sharon, seemingly out of the blue, mourns that there is no communication anymore between neighbors, “no real communication about real things….” and bursts into tears. Then, Kenny gets get his head accidentally wacked underneath a broken patio umbrella; the wound gushes blood; and the unraveling of the sunny side of suburban life begins in earnest. Nothing is as it seems. Mary, who works as a paralegal, is an alcoholic and miserable in her marriage; she pines for an outdoor life she has never really known but images she would like.  Sharon soon dips into drugs again, sharing her strange dreams in fever pitch monologues.  Ben is not working on starting a new business but living a fantasy existence on a website. And Kenny has a dark, hidden past; even his name is not real. The actors – Tim Getman as Ben, Emily Townley as Mary, Danny Gavigan as Kenny and Gabriela Fernandez-Coffey as Sharon – make these transitions, revealing the underbellies of their characters, seamlessly and effectively as the pace of the one hour and 45 minute drama quickens to its surprising and incendiary conclusion.

We are in the hands of a truly gifted young playwright who is clearly interested in exploring the underside of our neat societies and juxtaposing the “civilized” and predictable with the wild and untethered, the real and the imagined. In the second half of the play, backyard beer party degenerates into primal campfire hysteria, which proves to be as cleansing as it destructive, giving at least one couple a chance for a new beginning and a life lived more honestly. “I think I am feeling another skin just below my real skin,” Mary says. “It’s been there the whole time.”

Detroit, originally produced by Steppenwolf Theatre Company in Chicago and subsequently at the National Theatre in London and Playwrights Horizon in New York, has been heralded as a “break-through” play for D’Amour and honored as a 2011 Pulitzer Prize finalist. She has said is a companion piece to an earlier play of hers called The Cataract, again about two couples this time set in Minneapolis in 1883.  D’Amour is also known for the edgier, site-specific performances, such as Swimming Cities of Switchback Sea (2008), performed at parks along the Hudson River in collaboration with the visual artist Swoon, and musical pieces with her husband, composer Brendan Connelly. Talks are underway for other productions of Detroit around the country after it leaves Woolly Oct. 6. 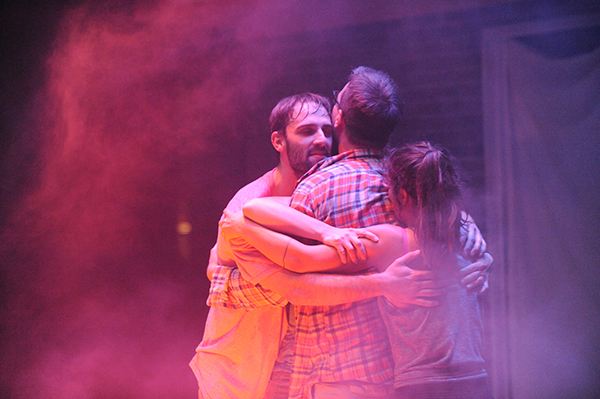