For about 30 years, from the mid-1960s to the mid-1990s, Kodachrome was king, the film of choice of professional photographers around the world. Kodachrome 25, introduced in 1965, was twice as fast as the color films that went before it, creating sharper images in a wide range of light conditions. And the colors were richer and more durable because dyes were added during processing; they were not on the film itself. But by the early 2000s, Kodachrome and film in general were being rapidly replaced by the instant gratification and endless manipulation of digital photography. By 2010, Kodachrome processing ceased altogether. The Kodachrome era was gone.

“I certainly feel lucky to have been working during this period,” said Nathan Benn, one of the masters of Kodachrome along with his older contemporaries William Eggleston (b. 1939) and Stephen Shore (b. 1947). Benn shot for National Geographic Magazine from 1972 until 1991, documenting people and places around the globe. He recently collected 108 of his images from the period, photographs of the Northeast, Midwest and parts of the southern United States, in a stunning coffee-table book, Kodachrome Memory, American Pictures 1972-1990 published this year by Powerhouse Books in Brooklyn, New York.

I talked to Benn about his book over coffee on a recent afternoon in New York. Tall, thin with close-cropped gray hair, Benn has not lost any of his enthusiasm for photography, though he stopping shooting pictures professionally over 20 years ago and moved into the business of photography, delving into internet photographic services and heading up Magnum, the international photo agency. He has a sparkle in his eye that attests I think to an undiminished curiosity about life and interest in beauty. Now in his early 60’s, he lives in Brooklyn with his wife Rebecca Abrams, also a photographer, and their son. His talk is punctuated with bursts of laughter. Benn seems at ease with his life, where he has been and where he is now.

Opening his book, he explored with me the stories behind some his images. He is a master of making interesting pictures of inconsequential events. The stories, sometimes conflicting stories, seemed as fresh in his mind today as when he took them. 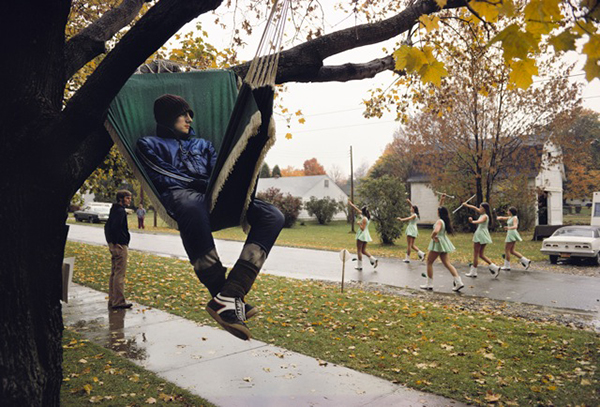 In Cohocton, New York, in 1975, Ben captured the preoccupations of teenage life on a fall day with a young boy, looking quite cold and miserable sitting in hammock in a tree. He had been there for over 24 hours in a tree-sitting contest. In the background in contrast were five saucy, short-skirted majorettes, strutting and twirling their batons, boot tassels flying high. 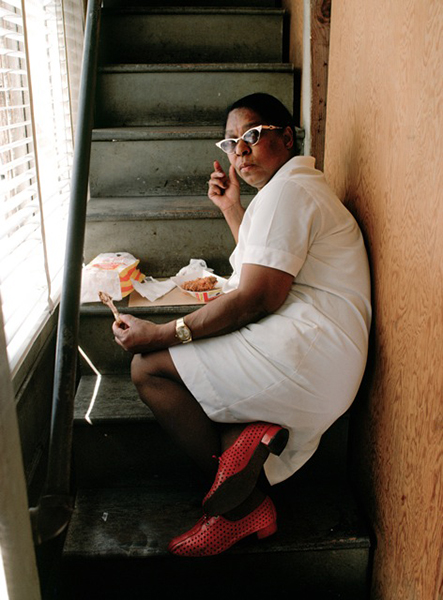 And, in an unscripted moment on a staircase in New Orleans in 1975, we immediately understand in Benn’s photograph the trapped, confined life of a black domestic worker in a white uniform eating her lunch. Fried chicken, red shoes and few moments to herself were perhaps her only indulgences. Her body seems to be trying to push out of the stairwell, out of the picture frame, out of her circumscribed existence. 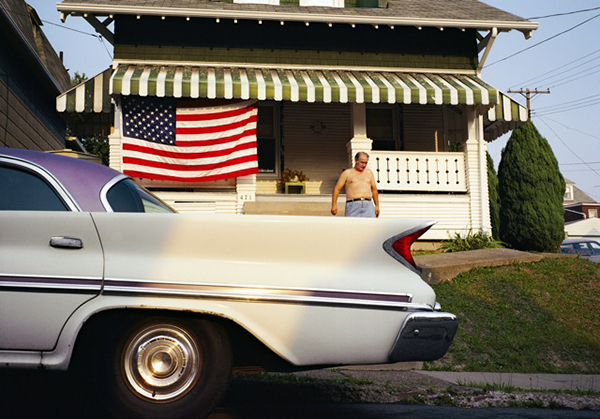 Benn took these pictures and many in the book during what he calls “walkies” – wandering the streets with two Leicas, shooting whatever captured his attention. In Pittsburgh on the Fourth of July, 1990, he was attracted to a row of bungalows in a residential neighborhood. Then, he saw one house with an American flag hanging on the porch and a vintage car. A bare chested middle-aged man came out of the house. Snap. Snap. Snap. Benn got off three frames of the wing-tipped car, the man, the house and flag.

For Benn, photography is two very distinct processes. Logically, he will go to a location, such as an old residential neighborhood of Pittsburgh, which he feels has promise for a photograph. But once he is there, he said, when he begins shooting he is not thinking at all. “I’m just reacting. I have enough experience with the tools so that managing the technology is second nature. I’m framing the shots instinctively; I’m flowing…and I don’t really know what I have. That’s the challenge of Kodachrome. We were all driven then to keep shooting to be sure we got the picture.” 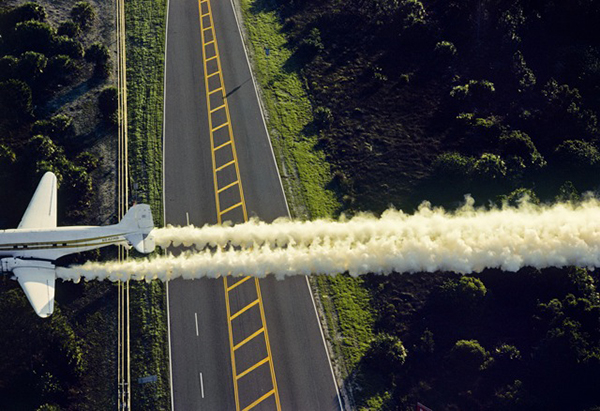 In fact, Benn credits this insecurity with getting some of what he considers his best shots, such as the graphic image of a crop duster crossing a road in Collier County Florida in 1981. “The picture I thought I wanted was of three planes in formation over houses. Once I got that shot, if I had had a digital camera and seen that it was OK, I would have stopped shooting. I would not have been driven to continue shooting the result of which was, I think, a better picture with half the plane, the horizontal plumes of insecticide, the vertical of the road.”

So, Kodrachrome, Benn said, was more than just a film with a special quality. It was a way of working that he believes led to more authentic pictures and what he misses about pictures today in this digital age is authenticity. “Too often,” he said, “what I see today is not a real moment but a concept created by an editor and a photographer.”

Benn typically shot 600 rolls of film for a National Geographic story or about 20,000 pictures. Only about 30 on average were published with a magazine story. Of the 108 pictures in Kodachrome Memory, ten appeared in Geographic; the rest were in the outtakes, the discards. Benn said he had never looked at the discards until he put together this book. And what he discovered in the thousands of discarded slides was an America, more punctuated with regional differences, that too was gone, like Kodachrome. Girls with bouffant hair-dos and barbers in starched white jackets. Jukebox diners and penny candy stores.  Both are remembered, with fondness and love, in this beautiful book. 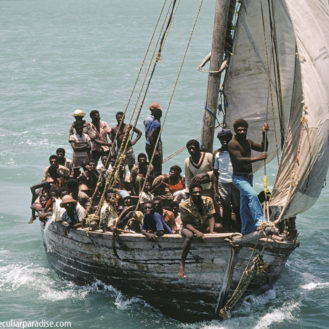 A Peculiar Paradise: Florida Photographs by Nathan Benn, a Book and an Exhibition at the HistoryMiami Museum, closing Sunday, April 4th, 2019