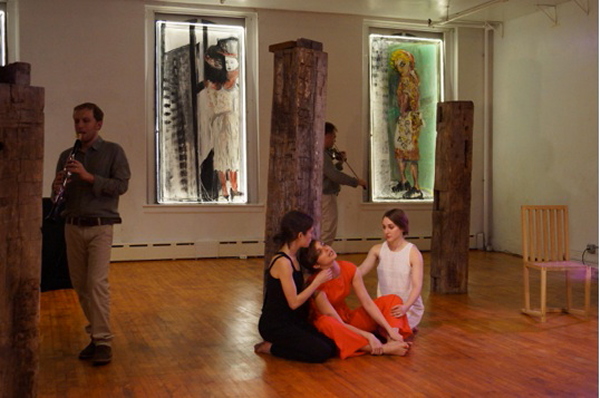 Halfway through the Story of Our Life at the Throes Theater Company.

(Tuesday – Friday at 8pm; Saturday and Sunday at 8pm & 2pm. Access Theater is located at 380 Broadway between Walker and White Streets, 2 blocks south of Canal. Tickets are $20, available at 800-838-3006 or www.brownpapertickets.com. For more info visit www.throestheater.com.)

The amazingly talented Alexandra Zelman-Doring’s latest creation is a comic investigation of identity that brings three actresses, three musicians and three composers together for an engaging hour of music and verse. From Ms Doring — “The search that ensues when “we wake to find we have been living in a dream we chose to call “reality.” Why are we as we are? Who is the “persona” that builds up in and around us?”

The work is divided into 3 parts with the pairing of a different actress and composer for each section. I must admit that I was a bit skeptical given some rather unpleasant experiences with these kinds of works. By unpleasant, I mean self-serving, over the top “schlock” that only serves to make both the actor and the musician look foolish. Thankfully, this production is refreshingly the opposite — grounded, insightful, creative, engaging and genuinely funny.

The opening features Benedita Pereira, a popular Portuguese TV actor (Best Actress at the 2010 Portugal TV7 Dias awards for “Ele e Ela”) and the distinguished composer Jiri Kaderabek. A vivacious and sensual performance by an actress who has a natural ability to connect with her audience.  Mr. Kaderabek’s score is well crafted and compelling with its playful back and forth banter between piano and violin, elegantly performed by violinist Marc Uys. During their performance, the other 2 actresses were on stage observing the unfolding story. I found myself engrossed with the current story but also with my own projecting re the possible story lines yet to be revealed.

Of course, I could not have been farther off the mark when Emma Meltzer, (Best Ensemble winner What Every Girl Should Know at FringeNYC) rose and revealed her hilarious journey. Ms. Melzer has the ability to project both innocence and strength with equal ease while making you laugh — a very talented actress indeed.  Composer Ana Milosavljevic’s writing here is lyrical and appropriately sentimental. Her beautiful Jewish melody for clarinet and piano was one of the high points of the show. Naum Goldenstein’s playing had a beautiful tone and sensitive pacing. 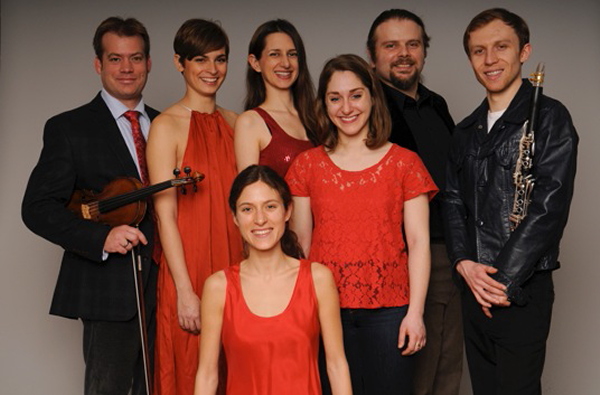 The cast of Halfway through the Story of Our Life.

Alexandra Zelman-Doring, having won the 2013 Financial Times/Bodley Head Prize as well as the 2008 Glascock Poetry Prize, is a masterful virtuoso both in her writing as well as her acting. Her energy and her focus are mesmerizing. Her commitment to and passion for the text transforms the listener in such a way that you simply cannot wait to find out how her journey ends. Mahir Cetiz is a first-rate composer and a very fine pianist. It is a shame that the theatre could not offer him a piano worthy of his skill. That being said, the strongest connection between the spoken word and the score was with these two artists. At times, the musical line combined with the spoken word to create what could almost be called a composite melody of musical tone and speech.

Ms. Doring’s writing is well paced while not predictable, engaging without excess, and smart without being patronizing. Three excellent composers and performers, a wonderful new work presented by an outstanding cast of artists.

Justin Bischof is the Director of Music at The Church of St. James the Less, Artistic Director of The Canadian Chamber Orchestra of New York City CCO/NYC, and of the NYC-based Modus Opera Company. In addition to his growing presence in and around New York City with these ensembles, past seasons have seen him work with orchestras in the US, Canada, Europe, Russia and Australia. Recent highlights have included performances with members of The New Mexico Symphony, the Ottawa National Arts Centre Orchestra, the Vancouver Symphony, the Ensemble Orchestral de Paris and the State Philharmonic in Kavkazskiye Mineralnye Vody in the opening of their prestigious summer festival on the occasion of his Russian debut. In 2008, he led the Australian premiere of Robert Ward’s Pulitzer Prize-winning The Crucible in a run of fully staged performances with orchestra at the WAAPA, nationally publicized as a milestone in the Australian operatic scene.

As Artistic Director and Founder of CCO/NYC, a group founded to promote Canadian artistry in NYC, he has infused his passion for helping others through music. Since 2007, each of CCO/NYC’s season has culminated in their annual ‘Transforming the Lives of Children through Music’ Children’s Benefit, netting over $400,000, which has enabled over 425 at risk children to attend a life-altering summer camp over the past 7 years.

As Artistic Director & Founder of The Modus Opera Company, he has conducted several staged productions including Mozart’s Così fan tutte, Don Giovanni and The Marriage of Figaro. Modus also has a concert series at such venues as CAMI Hall and (le) Poisson Rouge featuring both up and coming and internationally acclaimed singers.

He received his Doctorate in Organ from the Manhattan School of Music, where he later served on their Theory and Keyboard Skills faculty. He currently is a member of their Alumni Council. He has performed with numerous orchestras including The Zurich Symphony Orchestra, The Milwaukee Symphony, The Arkansas Symphony, and with members of the Orchestra of St. Luke’s in venues such as Carnegie Hall and The Tonhalle in Zurich.

He was a featured soloist with the Milwaukee Symphony Orchestra under the direction of Music Director Andreas Delfs in the world premiere of The Revelation of St. John by Swiss composer Daniel Schneider.  He made a highly anticipated return appearance in Saint Saëns’s Symphony No. 3 “Organ” under the direction of Maestro Delfs in a program shared with violinist Joshua Bell.

Described as ‘A master virtuoso’ in the Frankfurt News and ‘a master improviser of the highest order’ by the New York City AGO, Mr. Bischof won first prize in the 2000 American Guild of Organists National Improvisation Competition in Seattle.