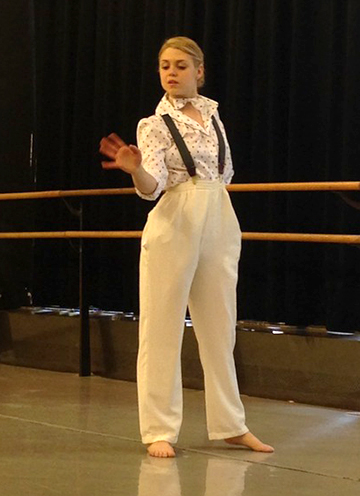 At first, the evening felt a little like an exam, as there was a sheaf of paper and a pencil on each seat, and the audience was told to mark each performance with an eye to musicality, originality, costumes and other information. Afterwards, each sheet would be given to the choreographer, presumably as a guide to fine-tuning his or her work.

Some of the dances had a generic quality—black leotards (many with creative riffs), bare feet and loud music, many pieces with spoken, deliberately half-unintelligible words behind the music. Endings were often abrupt but that was understandable as many pieces are excerpts of larger works.

I thought the most outstanding performer was Sarah Zielinski, a young woman with a charming smile, who revealed herself both as a talented  dancer with mobile, expressive hands and a sense of humor. Her piece, Wannabe, had her costumed in wide, white pants, suspenders, a black top and a bow tie that became part of the dance. The music, credited to Ximena Borges, was a mix of American Songbook standards, sung in unusual rhythms with tweaked melodies. The piece, whether intentional or not, reminded me of Charlie Chaplin.

The Resplendency Monologues featured Sarah Weber-Gallo, also the choreographer and costumer, dancing in a skirt fashioned from brown paper to make explicit the story of a princess, dragon and lost prince. Weber-Gallo is a strong performer with a long-torso, flexible body and beautifully articulated feet.

Two women and a man danced an excerpt from Flight, a  powerful piece with jumps and rolls on the floor that made use of the room’s columns and stationary barre, a good idea since they are very obvious. (I assume that, when performed in another setting, the choreographer plans to adapt the movements.)