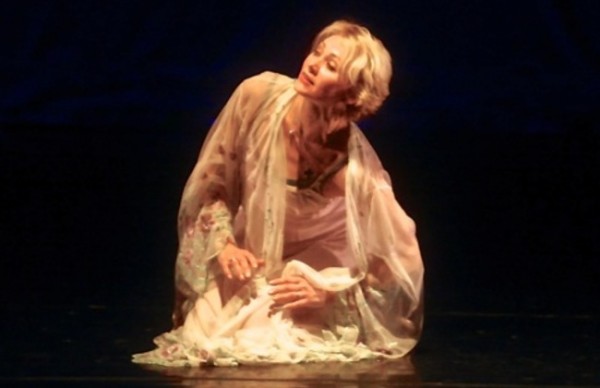 Valentina Kozlova was born in Moscow and trained at the Bolshoi Ballet School where she danced all the major classical roles. In 1979, on tour in the U.S with the Bolshoi, she defected and began her career anew, performing leading roles at the New York City Ballet; appearing at Spoleto, La Scala, Teatro Colon in Buenos Aires and also on video. In 2003, she opened her ballet school, a pre-professional training program that has been a launching pad for many students.

Choreographer Margo Sappington has created works for dance companies worldwide as well as work for Broadway, the Kansas City Ballet, Milwaukee Ballet, the Hubbard Street Dance Chicago and has a long history with Kozlova with works performed at the Joyce Theater in New York, elsewhere in the U.S. and in Italy.

The program, essentially an “end of year recital” showed students in excellent form, starting with Pacquito with ballerinas clad in black-and-white flower-like tutus provided by the New Jersey Ballet. While not as perfectly aligned as dancers in some professional companies, these dancers displayed a fine grasp of ballet technique as well as musicality. Their enjoyment in performing was highly evident, a tribute to their instruction.

Much of the program was devoted to segments from classic ballets but among the most enjoyable, well-danced pieces were contemporary offerings like Tears of Stone set to music by Björk, and Bossacucanova, choreographed by Sappington with frisky dancers moving to the rhythm of the samba.

The littlest students got a chance to shine in two numbers, Polonaise with music by Tchaikovsky, and La Fille du Pharon. Later, the Pas de Deux from La Bayadere gave Hannah Park time to unleash a beautiful performance that made the most of her lovely line.

Kozlova herself danced in Rêve d’Isadora, choreographed by Ms. Sappington, that displayed her grace and style. Her students and graduates seem very fond of her and her efforts have enabled many young dancers to move ahead with their careers.