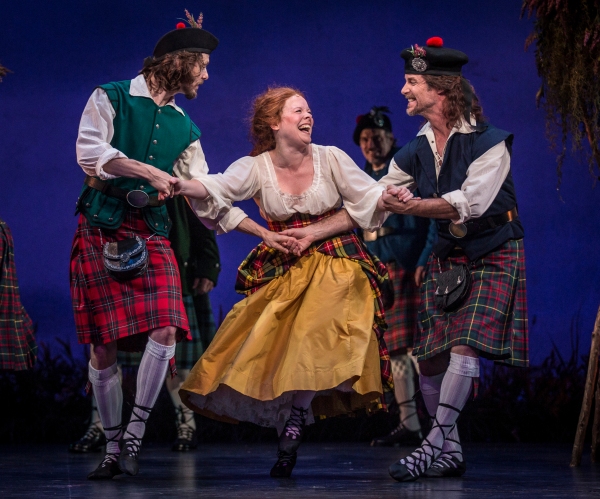 Sacrilege! Impertinence! Brigadoon, that beloved 1947 Golden Age musical about a Scottish town that awakens only once a century, has been rewritten! Ignoring silent protests and fears of Brigadoon fans everywhere, the Goodman Theatre of Chicago is presenting a new production with a new book.

Hold on to your bagpipes—they made it even better.

Brigadoon, with one of the most romantic scores in classic musical theatre, has not seen a major American presentation in 34 years. Rachel Rockwell, director and choreographer of the new production, says in a Goodman program interview “the biggest issue with Brigadoon is always that its preciousness has undermined its stakes.” When Liza Lerner, one of lyricist Alan Jay Lerner’s daughters, contacted Rockwell, almost immediately they agreed on a new approach. Together they enlisted Chicago’s Tony Award-winning regional theatre, the Goodman, to mount this new production that runs through August 10. 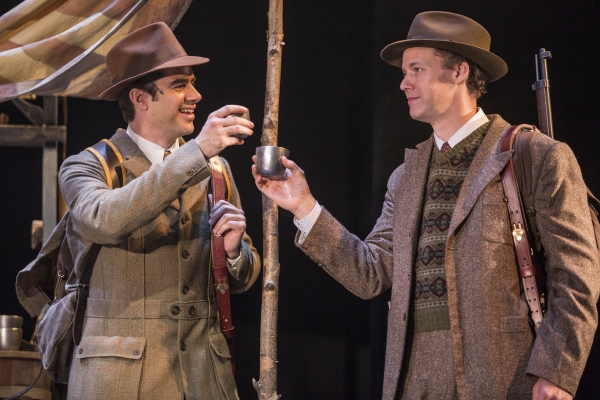 The basic story takes place in 1946 when two Americans—Tommy (having second thoughts about his upcoming marriage) and his best man Jeff—go on a pre-wedding bachelor hunting trip to Scotland, where the town of Brigadoon appears through the forest midst. When they investigate, they find all the townspeople dressed in 18th century clothing preparing for the wedding of Jean and Charlie to be held that evening. Tommy meets Fiona, with whom he quickly falls in love. Jeff meets Meg, who shows him a fine time in her little cabin. The hunters learn that the town has been given a miracle: To escape the horrors of 18th century Scotland the town goes to sleep for a hundred years each night. If someone tries to leave, Brigadoon will disappear forever. When Harry, a man spurned by his true love Jean, tries to leave the town he is chased down and dies. Brigadoon is saved. Tommy, now completely in love with Fiona, is talked out of staying in Brigadoon by Jeff. After his return to New York City, Tommy cannot stop thinking of Fiona and Brigadoon. The hunters return to the forest to find that Brigadoon has once again vanished. Tommy’s fierce love awakens the town leader, who escorts him back to Brigadoon, where he is reunited with Fiona.

A precious though romantic plot to be sure.

In the original book, Tommy has doubts about his marriage because he thinks it’s a mistake. The town disappears to escape 18th century witches in Scotland. Harry dies because Jeff trips him and causes him to fall on a rock and hit his head.

The new book is not up-dated. Rather it has been back-dated to focus on the actual history of 18th century Scotland. Brigadoon is now more grounded in reality. Its fantasy has been made relevant. Tommy and Jeff are former World War II soldiers, and Tommy has doubts about his upcoming marriage because his experiences on the front line have led him to question everything about his life. Brigadoon disappears to escape British punitive measures of not allowing the Scottish to bear arms or show their ethnicity in the form of wearing Highland dress and tartans. The town’s disappearing becomes an act of courage for its inhabitants.

Jeff doesn’t trip Harry, he shoots him (accompanied by gasps from some members of the audience familiar with the original story) as he was trained to shoot the enemy during the war. Tommy and Jeff are told they have the same empty look in their eyes as the soldiers returning to Brigadoon. The parallels to Germany’s actions against the Jews and PTSD are obvious.

The adaptation, sanctioned by the Lerner and Loewe estates, is now meaningful instead of quaint. It resonates with today’s audiences. And loving someone fiercely never goes out of style.

Another change the Goodman made was moving Tommy’s powerful song, “There But For You Go I,” from the beginning of the second act, when Tommy is in Scotland thinking of sacrificing everything and staying with Fiona in Brigadoon, to the end of the second act, when back in New York City, he recognizes the depth of his love for Fiona and decides to return to Brigadoon, if he can. It makes more sense. 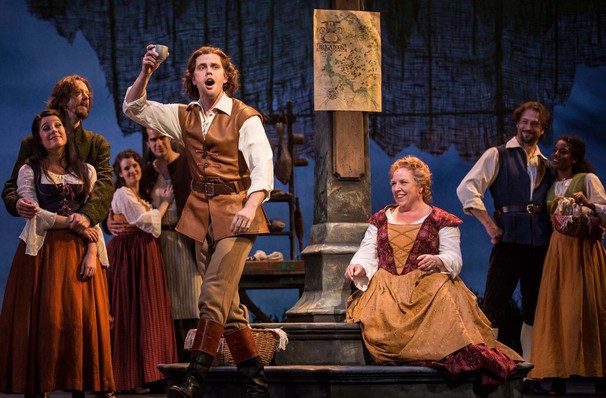 A Scene from Lerner and Loewe’s Brigadoon at the Goodman Theatre, Chicago

The Lerner and Loewe score—“Almost Like Being in Love,” “The Heather on The Hill,” “From This Day On,” to name a few—is as glorious as ever. It was the team’s first big success. The Goodman provided a thirteen piece orchestra to play Roberta Duchak’s arrangements, although one still wished for a full, but unaffordable, symphony.

The cast was uniformly excellent—singers, dancers and on-stage musicians. (Note: Rod Thomas replaced the original Jeff I saw in a preview.) Jennie Sophia was outstanding as Fiona. Her voice was soaring and operatic. Kevin Earley, too, was exceptional as Tommy. Olivia Renteria’s unusual grace as Jean reflected her ballet training. She movingly expressed her love and excitement for her marriage in the “Come to Me, Bend to Me” ballet as a solo. (Agnes de Mille, the original choreographer, used a corps in addition to the solo.) Jordan Brown’s tenor voice was particularly effective and romantic as Charlie, Jean’s intended. Maggie Portman was a loud, lively and winsome Meg. Rhett Guter as Harry and Katie Spelman were athletic and lyrical in their Scottish sword dances.

Mara Blumenfeld designed the costumes with great ingenuity. Not a plaid was seen until the entrance of the clans to the wedding at the end of Act One. As each clan entered the scene and wearing their tartans and announced their clan names, the reason that the town had chosen to disappear was made visible. You wanted to cheer for their courage and pride.

Rachel Rockwell’s direction and choreography are exactly right for this production, even though she omitted Agnes de Mille’s beautiful “Come to Me, Bend to Me” ballet. She has captured the charm and romance of the original and exquisitely brought to life the profound changes of the story.

Finally, Brian Hill, in collaboration with Rockwell, brilliantly revised the book of this beloved classic with meticulous, delicate and loving respect for the original.

While few theaters can provide the comfort and sightlines of Chicago’s Goodman, this production must make a speedy move to Broadway and regional theaters everywhere so that Brigadoon can once again have major productions in America.

The Goodman’s new Brigadoon is a triumph on every level. Bravo to all. 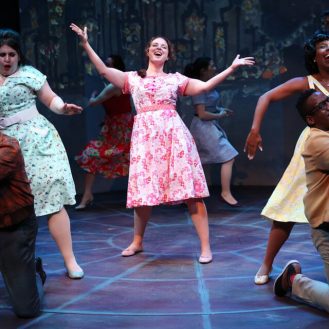 On a Clear Day You Can See Forever at the Irish Rep, extended to September 6