Emily Padgett and Erin Davie in a scene from “Side Show”. Photo Joan Marcus.

The original Side Show was an anomaly on Broadway. Although it opened to rave reviews in 1997, it was a mega-flop. Hardly anyone wanted to see a show about “Siamese” twins, freaks, and it closed after only 122 performances and a $6.8 million loss.

Now Side Show has been totally reimagined with a new director, a new choreographer, and several new songs. The show has evolved. And so has its audience. We’re a more diverse, open, and tolerant society with a much broader definition of “normal.” The headline of the original review in The New York Times said “Illuminating the Freak in Everyone.” The perspective of that headline today would surely change the words to “Illuminating the Humanity in …”

This new Side Show comes to Broadway after a major triumph at the Kennedy Center. The audience cheered at the preview I attended, and I enthusiastically joined them. We are more than ready for this show now.

The story of Side Show is based on the lives of conjoined (or, in non-politically correct terms, “Siamese”) twins, Daisy and Violet Hilton. They were born in England in 1908 and soon thereafter were sold to a side show where they were put on display as freaks. They were discovered by an ambitious talent promoter and became wildly successful in vaudeville. Eventually they went to Hollywood, where they were part of a 1932 film called Freaks. They died in 1969.

We first see Daisy and Violet cowering and vulnerable lit behind a poster of the movie for Freaks. When the stage is fully lit, we see the other acts in the side show and are introduced to them—the Lizard Man, the Bearded Lady, the Three-Legged man, Dog Boy, Cannibal—by Sir (Robert Joy) in the song,  “Come Look at the Freaks.” When he introduces the twins, Sir explains

Siamese twins share everything yet remain completely separate in their minds, bodily functions and, presumably, their souls.

We see the normal side of the freaks as they relax backstage after the show: Lizard Man dons glasses and Cannibal becomes Jake (David St. Louis), guardian of Daisy and Violet. While Daisy lusts after Terry, the promoter (Ryan Silverman), when he first appears, Violet discreetly pines for a normal married life and sets her affections upon Buddy (Matthew Hydzik). The central question of the plot is this: will the twins stay attached? At the time the story begins, medical science could not safely separate the twins, who were literally joined at the hip. Later, when the surgery has become safer, Terry makes the operation a criterion for marrying Daisy, and the twins must address the critical decision of their identities together and apart. 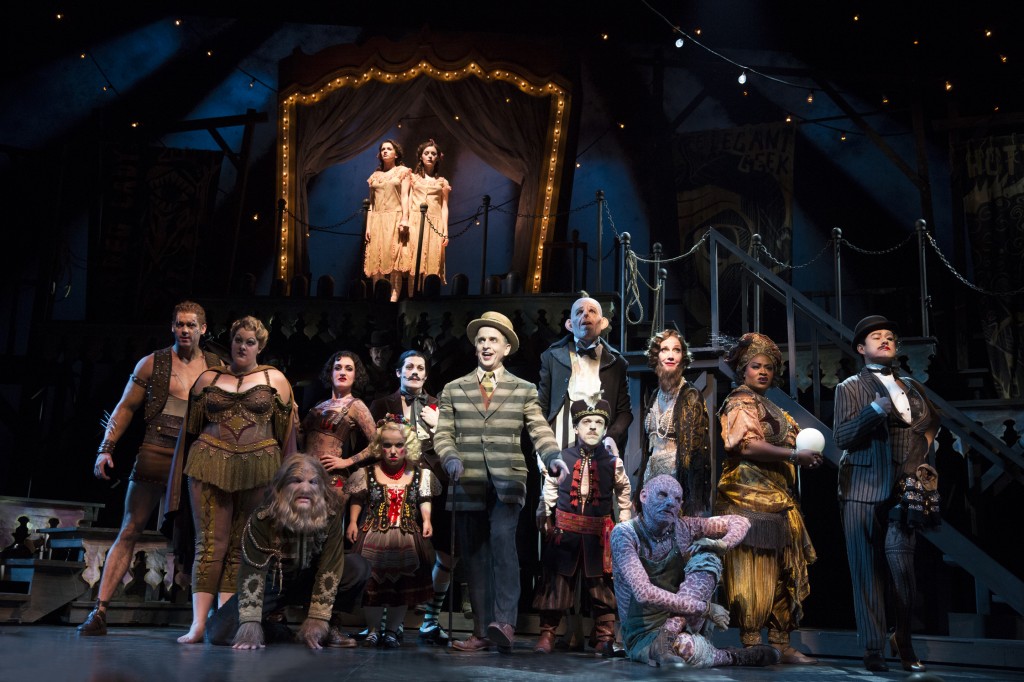 The cast of “Side Show”. Photo Joan Marcus.

Side Show’s book and lyrics by Bill Russell, the original writer and lyricist, and the music by Henry Krieger, the original composer, are focused and tight. Not a word or a note feels extraneous. The melodies are accessible, if not always memorable, but most important, the songs are extremely effective. They get to you. The only exception (and this is by no means a flaw) is the finale of Act I, “Who Will Love Me as I Am?” It feels too personal to be sung in a big production number by the entire side show of freaks even though they all share the same feeling. One is reminded of a song from La Cage aux Folles, “I Am What I Am,” sung by just one man that grabs the heart and makes us feel the pure emotion.

One reason for the effectiveness of virtually all of the songs in Side Show is that each is designed to communicate just one idea or emotion that we have all felt at one time or another in our own lives:

I want to be like everyone else so no one will point and stare. (sung by Daisy and Violet)

I will never leave you. I will never go away. We were meant to share each moment no matter what others may say. (Daisy and Violet)

We feel these focused songs. They tug at our emotions.

The choreography by Anthony Van Laast is creative and original. One particular number in the second act featuring the twins and three couples of male dancers is particularly striking.

David Rockwell has designed moveable, multi-tiered scenery that is highly workable. The Art-Deco backdrops are breathtakingly gorgeous. The costumes, whether for Daisy and Violet or the side show acts, are all stunning in their own way.

There are three stand-out, Tony-worthy performances: David St. Louis, whose deep, rich, powerful baritone voice twice brings down the house; and Erin Davie and Emily Padgett who sing, move, and dance in complete harmony. One can only imagine the hours of rehearsal these two exceptionally talented actors, dancers, and singers put in to achieve such seamless perfection.

Bill Condon, the Academy Award winning inventive director of the film version of Dreamgirls, has brought the same originality and imagination to this reconceived Side Show. He also supplied additional material for the book.

At the end of the show, a short, deformed “man” appears with all the side show acts. We haven’t seen him before. Such was the humanity in and the power of Side Show that I found myself with tears in my eyes as, thanks in part to the show, I was able to see past his deformities. I was relieved to learn later that this “man” was really a life-like puppet.

Don’t shy away from Side Show. Don’t be afraid to see this amazing production. It is a deeply moving, engrossing, and entertaining experience. I loved every minute.

This new production of Side Show appeared first at La Jolla Playhouse in La Jolla, California, and then moved to the Kennedy Center in Washington, DC. It opened on Broadway on November 17, 2014 at the St. James Theatre, 246 West 44th Street. 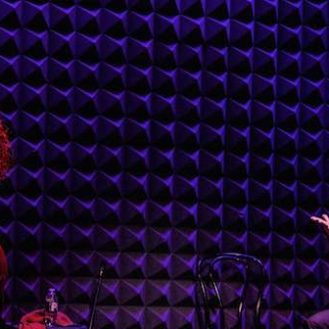