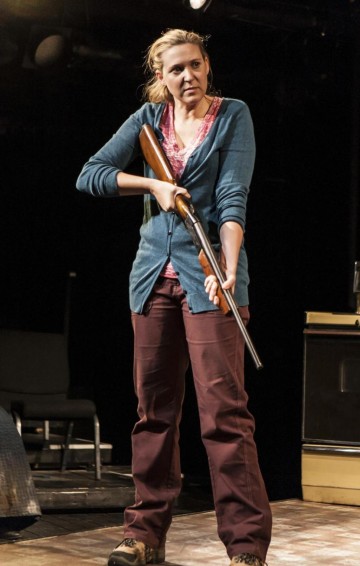 Cassie Beck in “The Insurgents”

Every character in The Insurgents, a new play by Lucy Thurber at The Bank Street Theater, is or has been disenfranchised. Sally Wright, played by Cassie Beck, has lost her athletic scholarship and returns to a dead-end, no hope town in the rural Northeast, joining her father, a drinker and womanizer and her brother who can’t get anything right. She begins carrying a shotgun and spends her time reading about Harriet Tubman, Nat Turner, John Brown and Timothy McVeigh, all characters who fought a particular version of inequality. Throughout the play, the historic characters come to life, played by actors who double as Sally’s family and her coach.

“I didn’t want to write about the people who wanted to get away,” Thurber said; “I wanted to write about people who…wanted to stay where they came from and are having an impossible time doing that.” That’s where her characters are as the play takes place during the “Toolbelt Recession” of 2008 when millions of construction as well as ancillary blue collar workers lost their jobs.

Beck, in a convincingly natural performance, begins by breaking the forth wall, talking to the audience about her rifle to explain she knows her way around a gun. She doesn’t fire it but several times I thought her anger had reached a point where she might. April Matthis as Harriet Tubman/Coach, has a light, sweet singing voice and a pointed sense of humor as Coach while Craig ‘Mums’ Grant handles Nat Turner/Jonathan, a New England local, in a measured way that shows his despair–and Turner’s– because of frightening injustices because of the color of his skin. Dan Butler plays John Brown/Peter (Sally’s dad) and Aaron Roman Weiner is Timothy McVeigh/Jimmy, (Sally’s brother.) Weiner is most convincing as McVeigh, a decorated war hero whose take on economics is, as Thurber points out, very close to what many average Americans would agree with, especially if they didn’t know whose opinions were being expressed. The line between terrorism and fighting against perceived injustice is pretty thin.

Music, including Creedence Clearwater Revival’s Long As I Can See the Light (in which the audience is encouraged to join at the end); Billie Holliday’s anti-lynching song Strange Fruit and Sweet Home Alabama, is woven neatly into the story helping underscore unpleasant realities. The closing sing-along aims for but doesn’t quite realize catharsis.

The set, mostly the kitchen of Sally’s home, is the work of Raul Abrego who gets the shabby, undistinguished look right. Costume designer Jessica Ford provides the cast with easy transformations from historic times to the present and vocal arranger Ben Wexler handles the music effectively. However, the entire play is a polemic against injustice and every now and again seems like overkill–and about ten minutes too long. Defiance is necessary, Thurber is saying; life is–and has been– uncertain and far too many people run into dead ends. A little trimming and she might have made her point even more strongly.