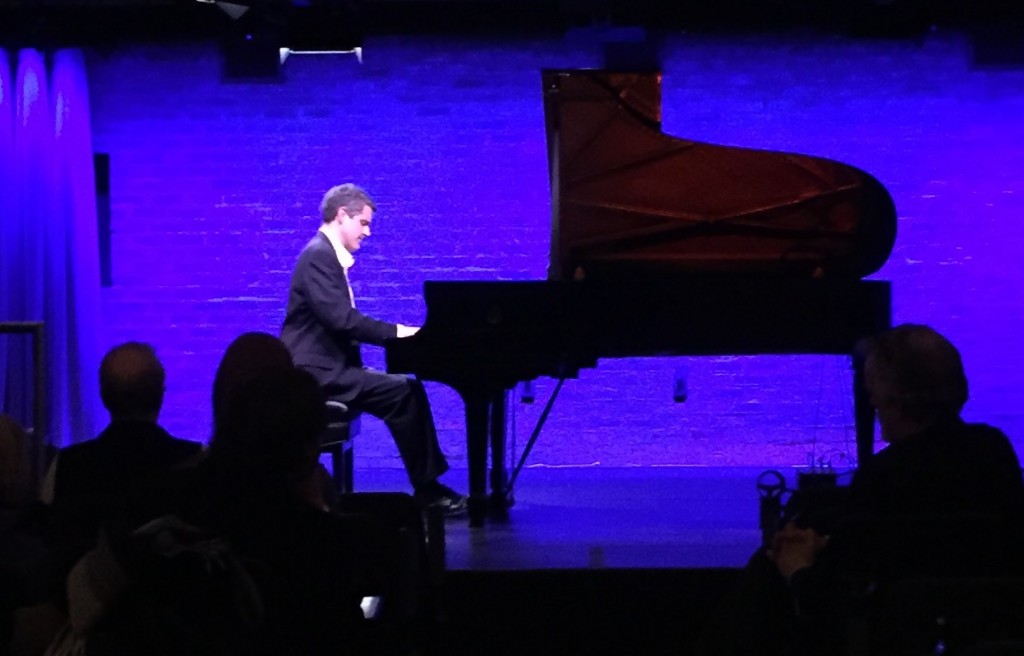 One can’t say that performances of both books of Debussy’s Preludes are absolutely unheard of, but they are sufficiently uncommon for Stephen Porter to deserve our admiration for his courage and enlightenment in offering them in the form he did. Not only did he perform both books in their entirety from memory, he prefaced each with a piece from Debussy’s earlier Images, in order to prepare the audience, and included engaging discussions of the composer and the works, not only providing us with background, but preparing us to listen, to enter Debussy’s particular world of sounds. In his own words: “…regarding the inclusion of the “Images”…first I liked having an introductory piece to get the audience’s ears adjusted to Debussy’s sound, before launching into 40 minutes of Preludes without a break. Second, the break before each book of Preludes allowed me to speak to the audience in a more natural way. Third, there is an interesting progression from Images Book I to Images Book II, that I believe is mirrored in the progression from Preludes Book I to Preludes Book II, and I certainly think this was Debussy’s intention. In style the first books are more clear, bright and harmonically straightforward, while the second books are more mysterious, obfuscated, and harmonically advanced. Also the encore, “The Snow is Dancing,” seemed to fit with the mystical world of Book II.”

Audiences usually hear the Preludes only a few pieces at a time, since the focus of piano recitals tend to be on the individual style of the pianist, and he or she will be inclined to select the pieces which accord best with that style, the rest of the program, or the performer’s mood at the time—not to mention concerns about attracting and holding an audience, who may find the prospect of a full evening of late Debussy rather daunting. The audience could not have been better prepared for the rich experience Mr. Porter created for them…and SubCulture’s intimate atmosphere and well-stocked bar played their own significant roles in supporting his efforts.

It is known that Debussy thought the Preludes to be uneven, and he himself discouraged playing them all together. While it is true that some are light, and some are profound, even mystical, Stephen Porter’s performance contradicted the composer’s insecurity most persuasively.

Stephen Porter has given a great deal of thought to Debussy’s titles, which appear after the pieces they relate to, as postscripts. The composer didn’t want the audience to be distracted from the music by the texts, but he wanted to include them nonetheless. The poetic underpinnings of the Preludes remain essential. By training and personal inclination, Debussy loved poetry and literature in general all his life, and his friendship with Stéphane Mallarmé was an all-pervasive influence on his way of imagining music as well as his overall sensibility, which is symbolist in essence. Rhetoric and story-telling are very much a part of that aesthetic. Even Mallarmé’s most hermetic poems suggest a narrative or dramatic situation. That is what emerges in these short pieces which make up the Preludes, as well as the Images and other works. Debussy brings the listener into a particular place and situation, wherein his mood, experience, and emotion lead to an overpowering epiphany—a climax in which the essence of the work is revealed. The pieces are poems, just as Mallarmé’s poems are musical in nature. When one hears a selection of three or four in a varied concert program it is possible to forget this, but not if one is concentratedly listening to the two books of the Preludes as wholes—or a whole, since the two books are thematically interrelated. The treatment of a particular idea in the second book is radically different from its model in the first, as if the second book were a commentary on, or an extension of the first, often leading into a higher, dreamlike level of consciousness, a mentality equally cultivated by Mallarmé and others in his group. The visual, subsumed into the memory and mind through sound, is also essential for both.

Stephen Porter’s presentation notwithstanding, it was his playing and his musical interpretations which made the evening such a powerful revelation. In his basic approach, Porter kept his attention on the narrative and dramatic qualities of each piece in its context. A clear statement of thematic material was crucial in this. He wanted us to grasp the basic elements of each piece, above all the main subject, as he attentively followed Debussy through the mental and sensual dramas they were put through. In order to achieve this, Porter was extremely judicious about using the pedal and indulging in coloristic effects that might distract the listener from the thematic content. There was more of that in Book II than in Book I, in accordance with Debussy’s indications. His playing was never dry, on the other hand, and he exploited the full range of SubCulture’s warm, nicely balanced Steinway. This is not a full concert grand, and accordingly it was slightly lacking in the very low notes Debussy reached for at several junctures—pretty much the only identifiable flaw in concert. He used the warm middle range of the instrument to great effect. In the instances where Debussy introduces his thematic material in this range, Porter played with special clarity, as if the voice of the composer were speaking to us. His playing, fully exploiting the qualities of the Steinway and the intimate space, was beautiful because of its eloquence and the way it drew our attention to the beauty of Debussy’s music, never any kind of generic impressionistic prettiness. On the other hand, he avoided the percussive, glassy tone some other pianists use when they are making an effort to avoid that clichéd “impressionistic” playing.

Stephen Porter’s traversal of Debussy’s Preludes was an important concert. It certainly changed my relationship to this music, and I understand them as never before, thanks above all to his musical intelligence, his splendid playing, and his deep study of the composer and his scores.