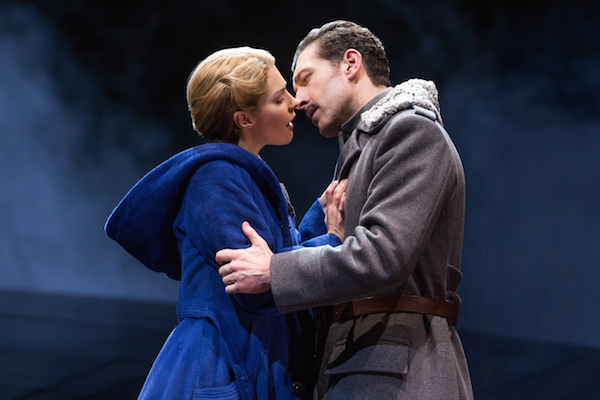 A Musical Version of Doctor Zhivago
At the Broadway Theatre

It begins with a funeral. It ends with a funeral. In between are jarring gun shots, explosions, fire, war, revolution, murder, suicide, blood, death—and everywhere passion, passion for a loved one, passion for a cause, passion for a home. The story of Doctor Zhivago, adapted from the movie based on the novel by Boris Pasternak, is huge, sweeping in scope. Even with a few lovely musical moments and some fine performances, this is a heavy, heavy evening in the theater.

To attempt to summarize the lengthy, convoluted plot…the story takes place in Russia during the Russian Revolution, WWI and the Russian Civil War. The boy Yuri Zhivago (Jonah Halperin as the boy; Tam Mutu as the adult Zhivago) has become an orphan. His mother has died and before that his father committed suicide, somehow caused by the show’s villan, Viktor Komarowsky (Tom Hewitt), a well-connected lawyer and businessman. Yuri is taken in by Anna and Alexander Gromeko, (Jacqueline Antaramian and Jamie Jackson) whose young daughter Tonia (Ava-Riley Miles as the girl; Lora Lee Gayer as the adult Tonia) promises Yuri lifelong friendship. Yuri grows up to be a doctor and a leading Russian poet. He and Tonia marry. (Supertitles help make the time and places in the story less difficult to follow—but not easy.)

Elsewhere in Moscow, the 17-year-old dressmaker Lara Guishar (Kelli Barrett) has been seduced by Komarowsky. A revolution is also brewing. Lara is in love with the Red revolution leader, Pasha Antipov, later called Strelnikov, (Paul Alexander Nolan), and soon marries him.

Yuri is first entranced by Lara at a party where she attempts to kill Komarowsky. Yuri is sent to the front in the war, and he and Lara  meet at a hospital, where they fall in love. Years later, Yuri returns to his wife and son in their Moscow mansion now taken over by the Red forces. For safety the family leaves for their summer home in the Ural mountains. Yuri knows that Lara has become a librarian in a neighboring town there. Yuri is captured by Strelnikov, who has foresworn all human attachment including to his wife and later commits suicide. When Yuri finally returns to his family, he visits Lara, who becomes his mistress. Eventually, Tonia and her family flee to Paris. Lara agrees to be taken to Moscow under the protection of Komarowsky; she falsely assumes that Yuri is coming too. He does not. He has developed a heart condition.  The final scene is his funeral attended by Lara and Lara and Yuri’s daughter.

As for the comic relief—well, there is none. Shakespeare would not approve.

It is hard to sympathize with the characters in Doctor Zhivago, seen in a late preview. Except for Tonia and her family, they all are both good and bad. Pasha is cruel. Yuri loves Lara but cheats on his wife. Lara has had an affair that she tries to break off by murdering Komarowsky. In addition, the difficulty of conveying the myriad times and places of the busy plot overwhelms the characters inhibiting much involvement with them. The production seems out of balance—something with which the creators undoubtedly struggled.

Tam Mutu, a London performer making his Broadway debut as Zhivago, has a beautiful strong voice and strong acting abilities. The same can be said for Kelli Barrett’s Lara. But it is Paul Alexander Nolan in the smaller role of Pasha/Strelnikov who steals the show with an electric performance.

Doctor Zhivago contains a few melodic songs—lyrics by Michael Korie and Amy Powers and music by Lucy Simon. (Full disclosure: Simon was a high school classmate.)  The first songs in the show are mostly expository. The problem with the rest is that virtually all are at the same fever pitch of intensity. At first hearing, they tend to blend together. Perhaps with multiple hearings the melodies would become familiar and therefore more distinguishable. It would be worth a try.

Michael Weller, who wrote the book, is to be applauded but only because he has logically condensed this huge story into two-and-a-quarter hours. But some of the lines—as when Doctor Zhivago removes a bullet from a soldier “The bullet passed through him. It’s a miracle”—were corny.

The scenic design by Michael Scott Mitchell was inventive. It worked but could be curious—as when a large photo of Lara was projected onto a curtain behind her during one of her scenes and songs. Why?

The undistinguished choreography was by Kelly Devine. Des McAnuff directed.

All in all Doctor Zhivago is one exhausting experience. If you must go, avoid eating a big meal first. 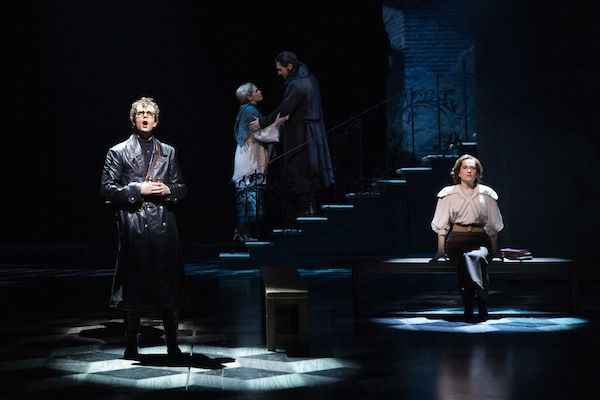