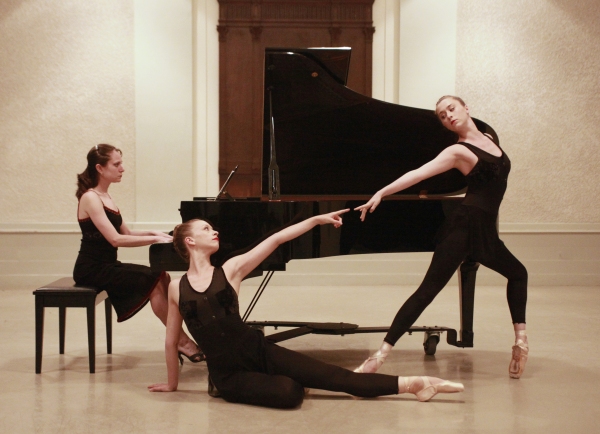 The modest setting: a large practice studio at City Center with the room’s reversed big-bowl chandeliers providing  the “lighting;” the audience on folding, metal chairs. German-born Miro Magloire was everywhere at once; welcoming the audience, providing background before each of the six offerings and repositioning the grand piano and music stand. Magloire’s company, New Chamber Ballet, is small with five dancers and often a guest artist; pianist Melody Fader whose brilliant playing enhanced  three pieces and violinist Doori Na who played the other three.

Small was indeed beautiful and, in most cases, memorable and highly original. The first dance, “The Letter,” set to a piano sonata by Joseph Haydn, was my favorite, showcasing Elizabeth Brown and Holly Curran, one busily polishing the piano; the other absorbed in a letter. The piece is sweetly humorous as the dancers argue with their bodies even at times when the piano ceases and the dancing—en pointe—continues.

In “A Simple Black Dress,” a birthday tribute to composer Pierre Boulez, set to his Anthèmes,  Amber Neff displayed big swoopy steps and deep second position pliés that rose into pique turns, showing off her elegant body in this spare, polished work.

Next up was the world premiere of “Proximity,” choreographed by Constantine Baecher who danced it with Christin Hannah, an original member of the troupe. Call it ballet contempo, the work includes lifts and tender intertwinings but lacked the force of other offerings.

La Mandragore, (“The Mandrake”), takes its name from the plant that has hallucinogenic and narcotic properties and was described by Magloire as “gnarly and twisted.” Traci Finch and Amber Neff in multicolored, full-body leotards wrapped themselves around one another in complex, androgynous postures accompanied by Melody Finch playing La Mandragore by Tristan Murail.

“Friction,” also a world premiere, was danced to “In Flow” by NYC-based composer and 2015 Guggenheim Fellow Richard Carrick, showcasing an increasingly intense aggressive confrontation between Curran and Neff.

The final dance, choreographed by Baecher, was set to three Mozart piano sonatas. The dancers speak,  sometimes making observations (“I’m on the end of the D train”); sometimes issuing directions (“Stop!”). I found the comments somewhat intrusive while appreciating the interaction of music, dance and spoken word.

Throughout, the dancers were so close to the audience that every drop of sweat and each breath was visible. Their expressions were calm yet alert; I sense them thinking through each foot or arm placement and paying close attention to colleagues onstage. Steps were mostly small in keeping with the intimacy of the setting and there was a deliberate lack of show-off theatricality.

Candace Thompson and Sarah Thea, credited with costumes, deserve much credit for their accomplishments that range from the classic loose dresses worn in the first ballet to the highly styled black leotards of Friction.

Too bad that New Chamber Ballet has two intermissions (one after every two dances) but it’s necessary as with so few performers, time is needed for brief respites as well as costume changes.

This is a thoughtful, talented company helmed by a leader who makes it clear that he, his dancers and musicians are constantly challenging themselves to put forward fresh work.