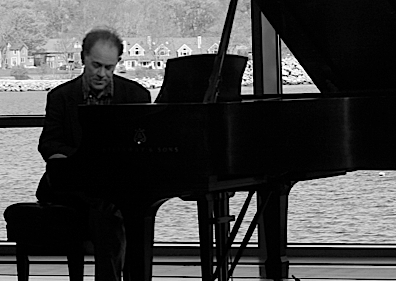 It is always a pleasure to be in the Cape Ann harbor town of Rockport and to attend musical events in the beautiful Shalin Liu recital hall with its glass wall looking out to sea. The June 26th concert provided a striking contrast in styles of Baroque era music, with works of Bach and Handel, respectively, in the two parts of the program. The listener was invited into an emotional journey from darkness to light.

Pianist Andrew Rangell took his seat, glanced out the glass wall to the sky and sea infused with evening light, gave a little headshake of disbelieving admiration, then launched into Bach’s D-Minor French Suite. Some like this music clear and dry, dance-like, steady, and rippling, its unremitting minor-mode sonority casting merely a gentle shadow over things. This was not Rangell’s approach. He played with a big sound, much pedal, creating overtones—though all remained clear—much bending of tempo, many surprising emphases on odd voices coming in or on Bach’s unnerving harmonic moves. Rangell was meditative and grand, though never losing the sense of dance—as if Bach had envisioned the later Beethoven. And indeed the music has this dimension. Rangell proved it with his convincing and organic performance.

For the Bach D-Minor Concerto Rangell was joined by a small ensemble of Emmanuel Music strings led by Emmanuel’s Artistic Director, Ryan Turner. Always with this piece the keyboard dominates, and here Rangell was not meditative, but set a relentless and driven approach for everybody. This suits the work’s dark and obsessive quality, as it repeats its pounding-rhythm material with slight variation, moves briefly into contrasting episodes, and comes back to the original material, going on and on. Good performances of the concerto are always relentless and driven, but Rangell offered an unusually big sound—and one rich in colors—and took faster tempos than some in the outer movements. After the G-Minor Adagio—hardly a reprieve, just a suspension—the finale was doggedly explosive—that’s the best way I can think to put it. The audience stood and cheered at the end.

The Bach of the concert’s first half seemed music born of the turbulent metaphysical depths—the Schopenhaurian Will. Handel’s cantata Apollo e Dafne brought us by contrast into a world of civilization, elegance, proportion, humor, and daylight. Handel wrote this piece in his twenties while still in Germany (though he had traveled and studied in Italy), yet it sounds very “English” and neoclassical like his later work after settling in London—something about the cadences and key relationships reminiscent of Purcell, the stateliness, the dotted rhythms, the just proportions. In a series of recitatives, arias, and duets, a rather bumptious god Apollo—vividly rendered by baritone Dana Whiteside—makes advances toward innocent and inexperienced Daphne—soprano Susan Consoli, strong and pure on the high notes but sometimes unsteady in pitch in the middle range. Daphne resists with fury for a time, but becomes subdued. Apollo can’t believe her unwillingness to accept him, but becomes himself subdued finding that the girl is transformed into a laurel tree out of horror and disdain of contact with him.

Handel’s human drama, modulating through several moods, is beautifully integrated with the orchestra of strings, two oboes, flute—associated with Daphne—bassoon, and harpsichord continuo. Textures vary with lots of inventiveness, and the instruments give all the more life to the characters and their interactions. Principal oboist Peggy Pearson played wonderful obbligato, often engaged in fine short duos with principal violinist Danielle Maddon. In the Bach the strings phrased elegantly but were not fully in tune. In the Handel, everybody sounded marvelous, in toto and in part—especially, besides Pearson and Maddon, flutist Vanessa Holroyd and bassoonist Thomas Stephenson. Ryan Turner led a well-paced performance, building the drama very effectively. Handel takes us through pridefulness, sexual threat, fear, resolution, and weird transformation/transcendence, making everything seem acceptable and palatable in a way, something a civilized person must acknowledge, even laugh at a little, however touched, going on with life in a well ordered world. 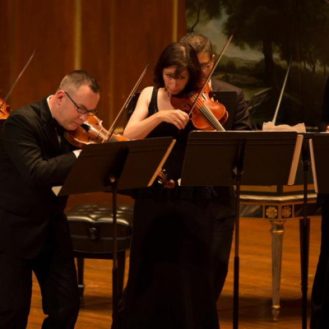 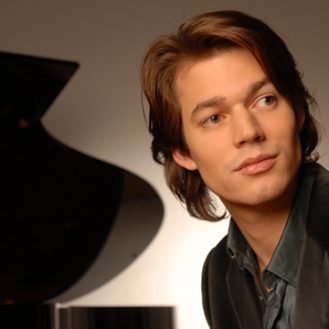