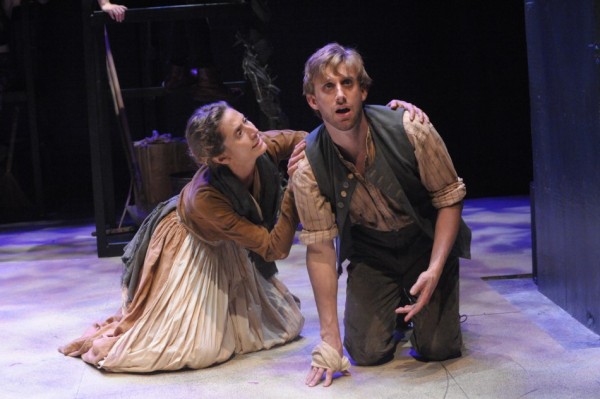 Judith: A Parting from the Body by Howard Barker, is based loosely on the Biblical tale of this woman’s heroism as depicted by artists through the ages including Artemesia Gentileschi, Botticelli, Lucas Cranach the Elder and Gustav Klimt. In Barker’s rendition, Judith, played by Pamela J. Gray, comes to the tent of Holofernes, wiry Alex Draper, accompanied by The Servant, brought to life by the excellent Patricia Buckley and garbed somewhat like a modern Orthodox Jewish woman in black hat and pearls. In this version, the fatal encounter is a complex duel of seduction and deception that requires the audience to stay alert as the narrative is challenging. We know how the story ends but, at times, aren’t sure it will move along the traditional directions as the actors lie to one another often leaving truth in doubt.

Judith’s heroism is evident early on as is her wit, matched by that of the other two characters. The actors are well-served by the spare, contemporary set design by Hallie Zieselman, lighting by Mark Evancho and costumes by Mira Veikler who matches the modern look of the set with a striking over-garment for Judith and allows Holofernes his modernity when he strips to a gray t-shirt and shorts before sleep.

The hour-long production, finely directed by Richard Romagnoli, is gripping; I wish the evening had ended on this high note.

The second feature a revival of Caryl Churchill’s Vinegar Tom, is about witches and their craft in a 17th century English village. The highlight for me was the singers: Caitlin Rose Duffy Joelle Mendoza and Liana Barron, who step forward intermittently to deliver cabaret-style harmonies only slightly related to the play. These women are terrific—the rest of the cast, not so much, especially as many accents were forced and, in some cases, made the dialogue hard to understand.

Churchill wrote the play in 1976 to investigate power relationships and the oppression of women. Her final scene, Malleus Maleficarum (Latin for ‘The Hammer of Witches’) is a famous fifteen-century treatise on witches, here performed by two of the persecuted women in top hats and male evening dress that adds to the Brecht-like theatrical feel. Program notes describe Vinegar Tom as a ‘cabaret about hanging witches, with no witches.’ While the subject is interesting, the plot isn’t that gripping and the whole—cabaret excepted—tends to drag.

The cast includes Tara Giordano, Bill Army, Kathleen Wise, Nesba Crenshaw, Steven Dykes, Lucy Faust, Patricia Buckley and Chelsea Melone, many of whom have worked with the critically-acclaimed PTP/NYC (Potomac Theatre Project) before. PTP/NYC, in its twenty-ninth year, is involved with Middlebury College; seeds work around the U.S. and strives to produce serious, politically aware theater.