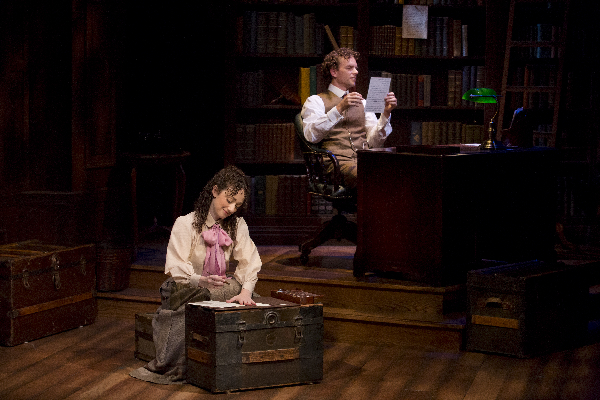 Daddy Long Legs has tiptoed into the 2015-2016 New York theater season. It’s amazing that anyone knows about this show, and yet the word has gotten around: Daddy Long Legs is an enchanting chamber musical.

The story begins in 1908. Jerusha Abbott, eighteen, is plucky, idealistic and the oldest resident of an orphanage when we first meet her. A trustee of the orphanage, one Jervis Pendleton, decides to anonymously become her mentor and benefactor. He will pay for four years at a woman’s college for her. (Probably Vassar, the alma mater of the author of the book on which the show is based). When Jervis writes to Jerusha to tell her that he has become her benefactor, he stipulates that she is to write him a letter once a month, that he will never write to her and that she must never meet him. He signs his letter, “John Smith.” Thinking “John Smith” is an unimaginative alias, about as exciting as a fence post, Jerusha nicknames him Daddy Long Legs in her first letter because she has seen him from the back and knows that he is tall.

Jerusha’s letters are whimsical, intimate and so charming that Jervis pins them up on his library wall. He soon falls in love with her. Because he is the uncle to one of Jerusha’s college friends, he is able to come to the college and meet Jerusha. Not knowing that he is Daddy Long Legs, she, too, slowly falls in love. Jervis is afraid to reveal his identity for fear of spoiling everything. She is afraid to reveal her orphan past to him, a well-born Pendleton, after all. In the movie on which the musical is based, Jervis, played by Fred Astaire is far older than Jerusha, played by Leslie Caron. Although in the current musical Jerusha worries that Jervis is old, he is only slightly older than she.

The story is predictable, strongly resembling She Loves Me in tone and outcome. But that hardly matters. It is the journey that is of interest. We are emotionally involved with Jerusha’s and Jervis’s romance for so many reasons.

First, the performers are superb. Megan McGinnis has eyes that constantly smile. She is winning and instantly likable. Her soprano voice is expressive and beautiful. Paul Alexander Nolan is convincing as the befuddled Jervis whose emotions finally overcome his reserve. He has a powerful voice as well. Both performers have been featured in Broadway shows. Although the performers wore microphones for reasons unknown, the voices came through unamplified. A real pleasure in this day and age.

Second, the production is gorgeous. It takes place in a paneled, book-filled library that serves both as Jervis’s office and Jerusha’s dorm room. At times it is also a country farm house. In old-fashioned script or typewriter type, projected titles tell us the location and year of each scene. The theatre has just 149 seats, and we feel physically part of the set the minute we enter the theatre.

Third, the expert lighting transforms the set as the years and moods change. It also transforms our emotions. Daddy Long Legs may be a small, off-Broadway show, but it is a first-class Broadway production.

Finally, the three piece orchestra, under the direction of Brad Haak, features an interesting combination of instruments—a keyboard, guitar and cello. Together they musicalize the range of emotions in the songs. Any larger and the orchestra could have overwhelmed the performers and the theatre.

In the simplicity of the story and its focus on basic human emotions, Daddy Long Legs can be compared favorably to another chamber musical, The Fantasticks. The music and lyrics by are effective, evocative and tuneful. They are a pleasure to listen to even though, with the possible exception of “The Secret of Happiness,” there are no memorable blockbusters like “Try to Remember” and “Soon It’s Gonna Rain.”

Playing just down the street from Kinky Boots, Daddy Long Legs couldn’t be more different. It is an old fashioned love story, utterly charming and enjoyable. Daddy Long Legs premiered at the Rubicon Theatre in Ventura, California in 2009 and has had productions all over the world. It’s about time it arrived in New York.