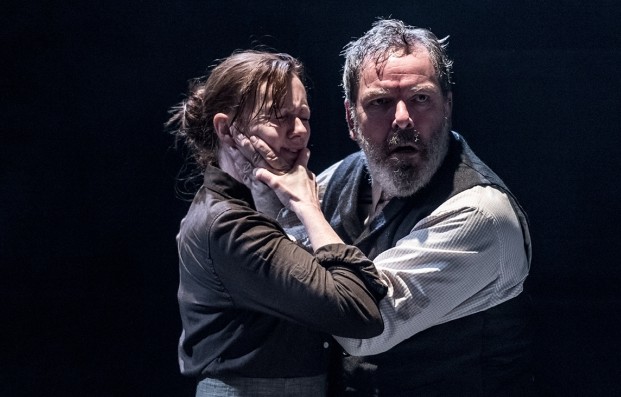 Down in the pit. The misery of being a woman in Nottinghamshire back when coal was king forms the preoccupation of Husbands and Sons, a composite of three one-act plays by D. H. Lawrence. Before they were rediscovered and staged, Lawrence’s dramas were an obscure part of his output, and now they risk being too dated to be vital. Like early Eugene O’Neill, the stage-minded Lawrence of 1911 to 1913, when these plays were written, aimed at naked social realism. The women trapped by brutal husbands working in the colliery stand on the brink of ruination from mining accidents, impending strikes, the cruel work hours that destroyed men’s bodies, and always the shadow of poverty.

On that score, director Marianne Elliott, working at the top of her game (which is saying something for the creative force behind War Horse and The Curious Incident of the Dog in the Nighttime), has perfectly captured the visceral longing that drives Lawrence’s characters, whether it’s the longing for love or a breakthrough into personal freedom. His first great novel, Sons and Lovers, appeared in 1913, so we aren’t surprised that these plays revolve around facets of Paul Morel, the artist-as-a-young-man who suffers in the novel, as Lawrence did in real life, from extreme empathy for women he couldn’t rescue, redeem, or break away from.

Elliott’s conception, working with adapter Ben Power, was to refashion the three plays as an amalgam of life in a colliery town, dividing the small arena stage of the National’s new Dorfman Theatre into three dining rooms where all the action takes place. A scene from one play will come to an end, or simply break off, and then we move on to a scene from one of the other two plays. This theatrical strategy expands Lawrence’s themes quite effectively, but when you slice and dice the texts, you run the risk of not finding an adequate ending, winding up with three overlapping resolutions that deflate as the audience’s attention wanders elsewhere on stage.

The three plots, performed by an ensemble cast of 17 talented actors (I won‘t mention names, because the cast is seamlessly merged), depict naturalistic slices of life, but Lawrence jiggers them into climactic revelations by the end, using disaster (a collapsed coal seam kills one of the husbands), willful defiance (a young, unhappy miner’s wife runs off for two weeks and spends all the money she has in the world), and painful confession (a college-age son embraces his mother as the woman he loves above any possible girlfriend). All of this is redolent of Sons and Lovers, and it’s not necessarily true that staging these themes is more effective than reading them. Even so, the sustained howl of pain that we confront is harrowing and, if you believe in Lawrence’s viewpoint, quite telling about human nature and its barely suppressed discontent.

Irish playwrights from Synge to Behan had an ear for the music of sorrow, and so did Lawrence. Working with the quaintness of “thou durst” and “I canna tell nought”—quaint to an outsider, that is—which echoes faraway Elizabethan English, he manages to capture the poetic rhythms of people who have no idea they are being poetic. This undercurrent of tragic lyricism stands out as one of Lawrence’s strongest dramatic gifts. It has the effect (or illusion?) of speaking from the soul.

Although tagged with the embarrassing label of the “messiah of sex” when he was considered scandalously explicit, Lawrence doesn’t bring sex forward very much here, and then indirectly. (A young husband whose wife has turned into a harridan seven weeks into their marriage grumbles, “You like me some of the time.“) The primary focus is on the tormented “respectable” behavior seared into Lawrence’s psyche growing up, especially the profane, drunken violence of fathers bent on subjugating and emotionally attacking their women and children. The outpouring of male rage is shockingly graphic, and whether it’s a lout who can’t end a sentence without calling his wife a nasty bitch or a falling-down drunk who brings home a pair of giggly prostitutes after passing himself off as unmarried down at the pub, men are a constant trial. That women love them at all frustrated Lawrence personally, as it does his stand-in Paul Morel, or in this case the college student named Ernest Lambert, who comes closest to being autobiographical.

The solution that comes to mind pragmatically—pack your bags and leave—is impossible for these duty-bound women. Therefore, Lawrence imagines a cathartic breakdown in the family, leading to raw emotionalism, truth-telling, and frayed nerves, after which the balm of a finer love soothes the wounded. Even the most abused wife in the play, Lizzie Holroyd, who is about to run away from home with a decent young electrician who wants to rescue her, is overcome with love for her husband when his body is brought home after the mine collapse; she bends over it weeping “My dear, my dear” as our final glimpse of her.

In a sense every character throughout Lawrence’s literary career wants to echo one of his most explicit titles, applied to a book of poetry from 1917: “Look,! We Have Come Through.” Something similar fueled Freud’s attempt to enter the purgatory of the subconscious in order to arrive at the paradise of healthy love. (Although Freud clothed his quest in quasi-science while Lawrence clothed his in quasi-mysticism, there’s not much juice left in either one so far as many modern people are concerned.) Lawrence is pre-eminently a writer for twenty-somethings, whose relationships are fervent and fermenting. In his world, relationships should remain that way until a man and woman reach “star equilibrium,“ an idealized soul marriage as erotically satisfying as it is spiritually transcendent

Almost nowhere in his novels do we find a settled mature relationship—everyone is riding the conveyor belt of Lawrence’s never-ending quest. In his once notorious, now neglected The Prisoner of Sex (1971), Norman Mailer spent considerable time talking about Lawrence, declaring that he was lucky to escape being homosexual. My memory for Mailer’s argument has dimmed, but he trafficked in the same coinage of Freudian Oedipal-speak that entranced both Lawrence and O’Neill when they dissected family dynamics. So it rolled easily off the tongue that a momma’s boy will turn out queer if he doesn’t watch out.

I think, on the contrary, that Lawrence was lucky to escape—if he did—the fate of being a crippled narcissist. Shorn of his literary genius, his psycho-sexual fatalism comes off today as crankiness, and his allegiance to instinct and “blood consciousness” over rational thought is suspiciously atavistic. But as I watched the first (and better) half of Husbands and Sons, the impact of suffering portrayed with total conviction was almost as cathartic as Lawrence might have wished for. The sense of iron-bound custom and stubborn narrow-mindedness was potent, imprisoning both men and women; they are their own jailers, and Lawrence‘s attempt to free them was as touching as ever.

Note: For anyone who wants to consult the three plays in their original form, the titles are “A Collier’s Friday Night,” “The Widowing of Mrs. Holroyd,” and “The Daughter-in-Law.” 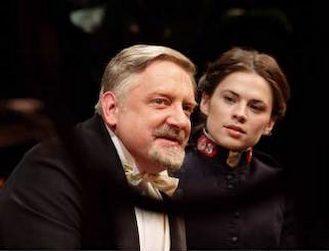 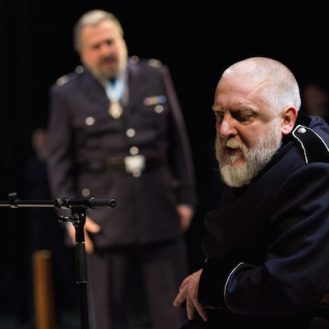 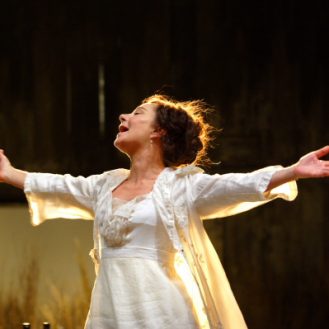 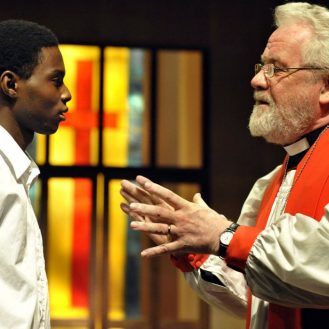