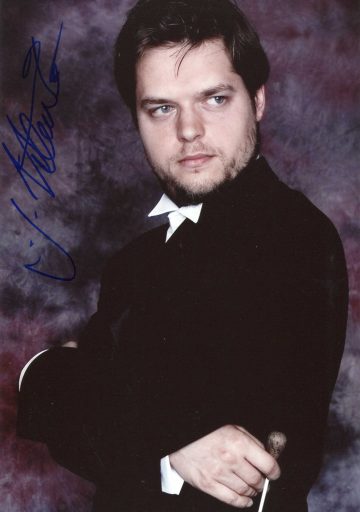 There are all sorts of motivations for going to a concert. As a former conductors’ agent, I was curious to learn what Juraj Valčuha would be like in person. (I missed his SFS debut here a few seasons ago.) Valčuha is a forty-year-old Slovakian rapidly climbing the guest-conducting and music directorship career ladder. He is currently in charge of the RAI Orchestra in Torino, but has appeared by now with most of the major European and American ensembles. So what would he sound like?

And I was eager to hear live Webern’s Im Sommerwind, which one learns with astonishment was never performed until 1962—and then by Eugene Ormandy, of all people! Im Sommerwind belies Webern’s reputation for cryptic, minimal music. Indeed, Arnold Schoenberg told him to stop writing orchestral pieces for a while after hearing it! Too nice a work, I find myself thinking cynically! That must be why I’ve loved it for decades!

Im Sommerwind is a gorgeous piece, no harder to take in than Debussy’s Prelude to the Afternoon of a Faun, and written with the same nature-worship and pantheism in mind. The only hint of Webern-to-come is to be found in its one climactic moment, a slightly acerbic and dry-throated brass blare in octaves. But surrounding this is a lovely build-up and fade-away of creamy romance and delicate plucked-harp sentiment. I’ve known several recorded performances over the years. Chailly’s and Inbal’s have a fine sweep to them, which carries melody onward. Juraj Valčuha played it for stasis, with less emphasis on forward motion from the strings. And this gave me a clue, perhaps, to what he is all about.

Conductors, famously commented Sir Thomas Beecham, tend to be “accelerando” (think Toscanini) or “ritardando” (imagine Barbirolli—or perhaps Beecham himself). But it seems to me there is a third kind. Maybe we would call him the “granitic” conductor. Otto Klemperer and Kurt Sanderling come to mind.

Klemperer and Sanderling produced weighty, beautiful textures and a sense of cumulative power. But they “accelerated” slowly, more like a bus than a sports car, and when called upon to be nimble, seemed a little heavy on the dance floor. This can be all to the good in emphatic repertoire—but it has its limitations, too. Ormandy was like that in Ravel—a touch lumbering—the hippopotamus at the ball.

Juraj Valčuha stood before the San Francisco Symphony in classic white tie and tails, rare these days, a slightly formal figure (MSNBC’s Chris Hayes with a beard?), and his earnest music making seemed to follow suit.

Prokofiev’s Love for Three Oranges was rich and gleaming, with wonderful pumping basses, the occasional light-hearted reminder of Walton, some fine perfumed French romance and a very Hitchcockian sense of creepy sonority. “Granitic” conductors are good at this sort of thing.

But I was less happy with the Strauss pieces. Everything was a fraction slow and deliberate. Don Juan opened with a fire-hydrant’s worth of sixteenth notes. This was no mere fountain! And while I enjoyed our gorgeous horns throughout, and it was intriguing to see Valčuha’s left hand hover over the strings like a drone at romantic moments, I missed the light-cream winds of a European orchestra. The SFS simply doesn’t try for this sort of “Vienna” sound. Similarly, the Rosenkavalier music was effective, in a general way. But Valčuha seemed to lose the line in the closing duet.

A “granitic” conductor, it seems, is prone to conducting by the bar as much as by the phrase. This approach always leaves more romantic temperaments wondering why such music-making doesn’t sweep and swerve and move around more lightly. That’s how I felt, in any case, listening to Juraj Valčuha. He clearly belongs on the world’s better podiums. But the jury is still out for predicting what he will do from them. 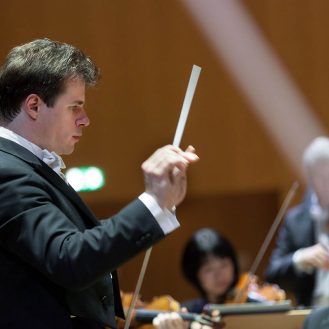