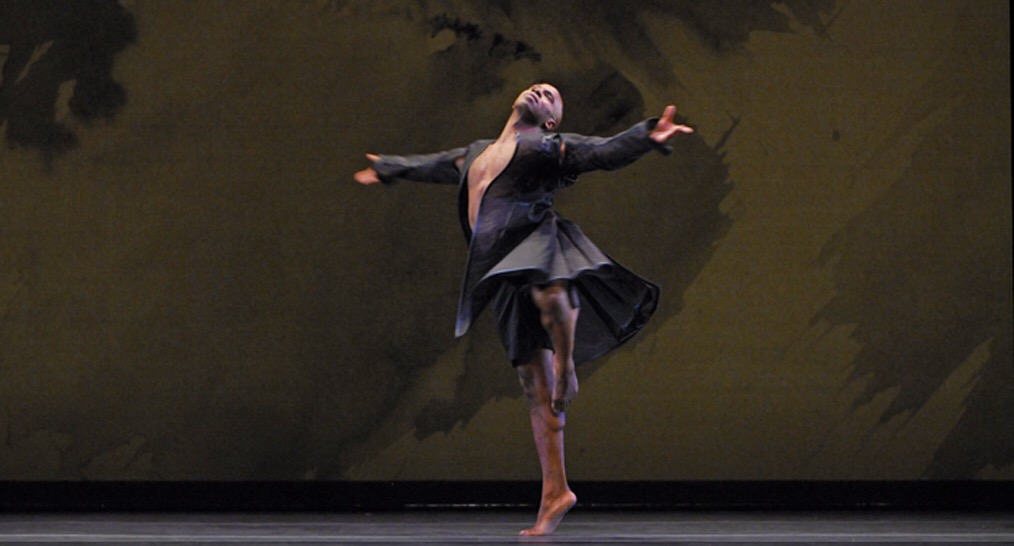 Many choreographers go out of their way to avoid the music of Mozart fearing their work won’t (or can’t) approach the same level of artistry. Happily, Mark Morris is not among them. His Mozart Dances, originally commissioned by Lincoln Center for the Performing Arts, the New Crowned Hope Festival in Vienna and London’s Barbican Centre ten years ago, has dancers swirling and bouncing through a piano sonata and two piano concertos, almost all with the inspired touch of two masters.

Set against backdrops with big brushstrokes, the pieces are understated and lyrical, answering each other in steps and gestures as well as the connection with the composer. The work throughout is enhanced by pianists Garrick Ohlsson and Inon Barnatan, with Louis Langrée conducting the Mostly Mozart Festival Orchestra .
Mozart Dances is made up of three sections, each danced to a different Mozart composition. “Eleven,” set to Mozart’s Piano Concerto No.11, opens with bare-chested men leaping. After a short while they leave the stage to women in flowing charcoal dresses who repeat three small jumps on both feet and make what comes to feel like a “signature” move—bodies turned away from the audience while hands move behind heads, elbows pointing upwards. This gesture repeats many times and reappears in “Twenty-Seven,” the third and last piece.

“Double,” set to the Sonata in D Major for Two Pianos, features the male members of the company led by a dancer in an open, vaguely Baroque-style frock coat and knee britches. There is a fairly long, almost passionate duet, for two men; later, other men weave in and out of the action adding flying jumps and circular patterns that ebb and flow. Abruptly, women dancers arrive in romantic, gauzy costumes dancing with the men until together they form a circle.

The final piece, Twenty-seven, works with Piano Concerto No.27 in B-flat major, a work that gathers men and women clad in loose white costumes. The backdrop color brightens with some red added to the black and white. In the beginning, the dancers drop to the ground, their hands reaching upwards with one arm extended. The piece moves into skips and jumps with men leaping into the arms of others. There is humor l humor in the slap of arms against sides. At the conclusion, the dancers stand, facing each other, holding their arms out. We are feel happy and fulfilled with what has been an evening of pure dance and music.

Morris loves his dancers and said as much in the pre-show conversation with Ara Guzelimian, Provost and Dean of the Julliard School. His company, some of whom have performed Mozart Dances since its inception and some who are new to it, seem to flourish under his tutelage. Mozart Dances is an outpouring of mutual pleasure in which the audience shares.