You may wonder about my interest in this traditional American delicacy. It comes not from the interests I share with Sgr. Rossini, but from my experiences as a curator in the Cleveland Museum of Art. As my colleagues and I pushed papers and watched western civilization melt into Lake Erie, a remarkable artist from Akron came to our attention. This artist, who worked under the name B. F. Kiefrich, produced sculptures from Spam®, among them an exquisite gilt miniature Book of Hours, known as the Codex Spambergensis and a porcine version of Nefertiti’s lips. Since Kiefrich emerged at the height of post-modernism, the referential character of his work should not be surprising. Suddenly, just as he was about to achieve world fame, he disappeared. Spam® sculpture has since been popularized (rather, vulgarized)—to its detriment. No SPAM®artist has ever shown the genius of Kiefrich, with his medievalist’s sensibility and devotion to the painstaking craft of the miniaturist.

I was honored to write the text for the first exhibition of the Codex Spambergensis, and I quote it here, since it is all that has ever been written about this great forgotten master:

As the era non-electronic information storage approaches its end, this work stands out as perhaps the masterpiece of contemporary bibliofetishry. The codex (or stump), once confined to a class of scribes and scholars whose lives were devoted to their production and use, was made available to a much wider public through the invention of the printing press in the fifteenth century. These objects were regarded as vitally important tools of devotion, information, communication, inflammation, and amusement. By the nineteenth century examples of almost infinite variety could be found on the shelves of persons of all walks of life. The tradition transcended itself, as stumps came into the possession of illiterate owners; and, as illiteracy ascended up the socio-economic scale, the functional object, whether decorated on not, metamorphosed into the biblioid fetish—a higher form of human expression. The b. f., as specialists affectionally call it, relates to the textual stump as a crozier relates to a shepherd’s staff. The post-literate fetishist relates to the reader as a bishop relates to a shepherd.

B. F. Kiefrich is the pseudonym of an Akronian master who adopted the name to reflect his total devotion to his art and to his teacher Anselm Kiefer of Germany in the continent known as Europe.* As a consummate fetishist he has, in the tradition of the great medieval scribes and illuminators, cast off any ego or identity beyond the product of his unstinting labors. He has eaten nothing but Spam® for the past fifteen years in order to perfect his fetishism not only on a spiritual, but also a physical level. In a rare interview (for he has all but taken a vow of silence) he said: “I eat Spam®. I breathe Spam®. I smell Spam®. I shit Spam®. I am Spam®.” As his only recreation he watches videotapes of Spam® commercials, of which he possesses the only complete collection in existence. His only other concern is politics: he has been an ardent conservative Republican “since I can remember,” as he so charmingly expressed it in the interview.

The gilt strips on the binding are not only subtle allusions to the gilt ornament of precious book bindings, but a homage to his master Kiefer, who employed metal in many of his own works. Its exquisite exsudations symbolize the Trinity, the rise and fall of the Third Reich, Watergate, and the decline of the American rubber industry. Its constantly diminishing size expresses entropy, the force in nature which engenders bibliofetishism (its theoretical hypostatization, as contradistinguished from bibliofetishry, its socio-artistic manifestation). The total unity into which the artist has forced his life, his art, his material, the object, its meaning, and its form is compounded by the self-referentiality of itself as an entity and of its component parts as well. In this way Kiefrich has achieved a sort of double monism—something unique in the history of art.

*This quaint amplification was required by the Education Department at the museum. 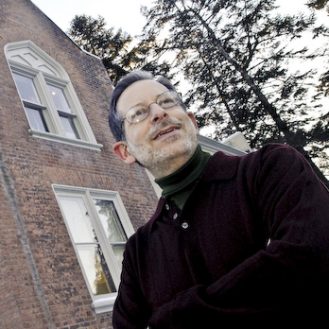