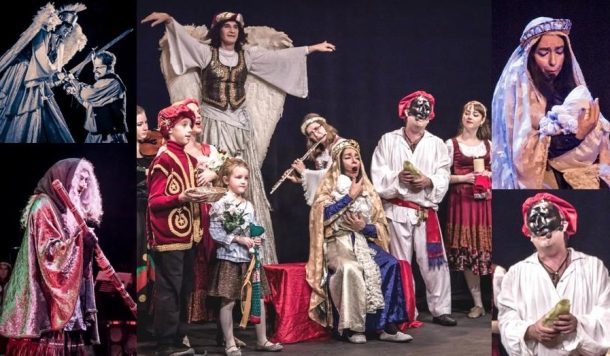 Come back in time to Southern Italy with Alessandra Belloni and I Giullari di Piazza, the renowned Italian music/theater/dance company, when they present their traditional Southern Italian “La Cantata dei Pastori,” (The Shepherd’s Cantata) a musical family holiday delight, at Theater for the New City, 155 First Avenue (between 9th & 10th Streets). Five performances, December 16 & 17 at 8 PM; December 18 at 5 PM; December 21 & 22 at 8 PM.   Starring as Mary in this unique production is the internationally renowned singer, percussionist, author, and director, Alessandra Belloni, an acknowledged authority on traditional Southern Italian arts, co-founder of I Giullari di Piazza (The Jesters of the Square), and solo guest performer in venues around the world.

Belloni leads the 14-member cast of specialists in Southern Italian instruments, music and dance, playing such characters as La Befana, the Good Witch of Christmas, Mary and Joseph, the Archangel Gabriel (on stilts), Devils, Demons, and the hilarious commedia dell’arte characters who enact this beloved story of the journey of Mary and Joseph to Bethlehem, and the triumph of good over evil as Mary uses her tambourine to defeat the Devil and Dragon, who are trying to stop the birth of Jesus. 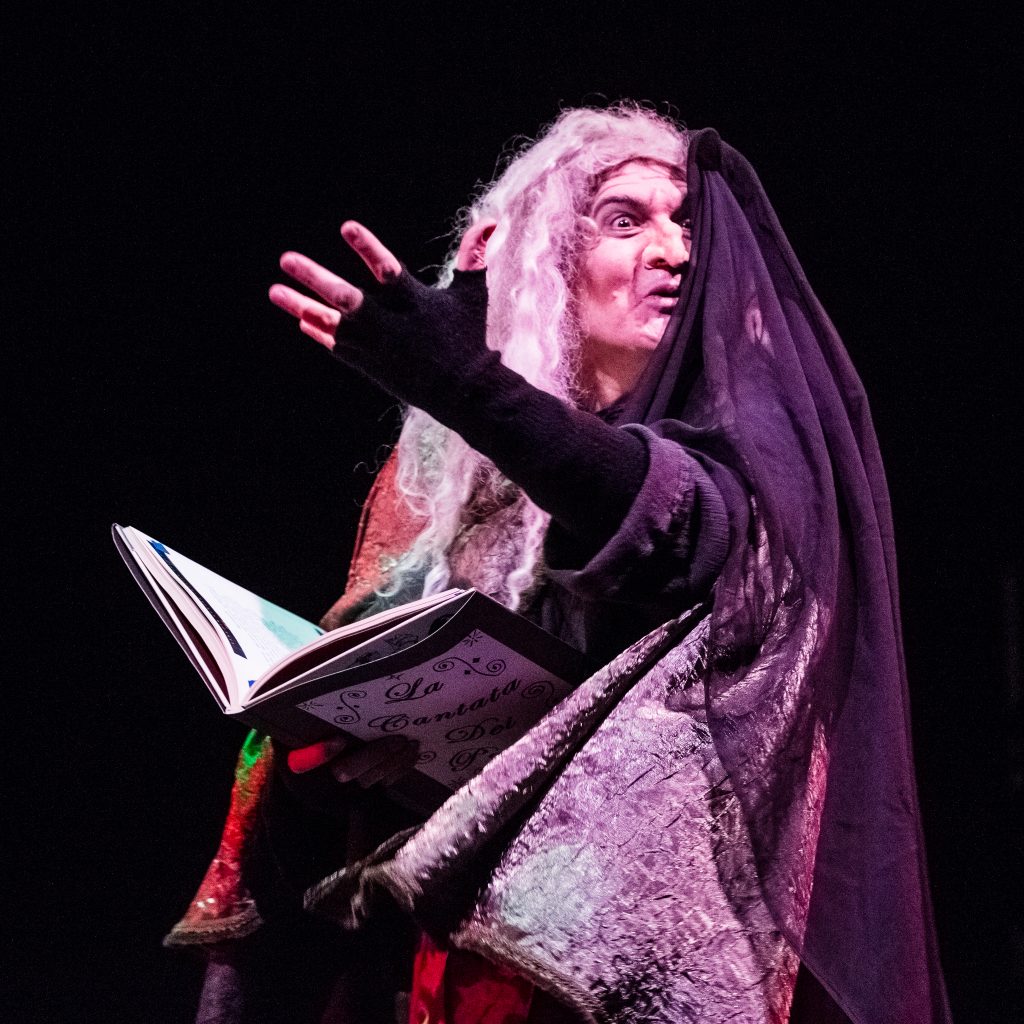 The music—tarantellas, villanellas and pastorales—comes from traditional sources, with original music by John La Barbera and directed by Susan Eberenz. Adaptation and stage direction are by Alessandra Belloni. Songs are sung in Italian and old Neapolitan dialect; costuming and music instrumentation is traditional Southern Italian; narration is in English. After the fast paced, over-the-top scenes of devils, angels, commedia dell’arte, and general mayhem, the play ends with Mary and her infant child, joined by the Company, in a reverent performance of the oldest recorded Neapolitan Christmas song.

The play is set during Mary and Joseph’s journey to Bethlehem, during which the Devil has dispatched demons to stop the birth of Jesus. Along the way, the holy couple’s escapades are entwined with the hapless commedia dell’arte character called Razzullo, a mischievous Neapolitan scribe who is always hungry and looking for something to eat. The demons, in the meanwhile, conjure up tempests, dragons, and do all they can to stop the birth, but all are under the protection of the Archangel Gabriel (played here, in traditional style, by the well-known stilt dancer Mark Mindek,. Mary and Joseph experience funny, outrageous, and dangerous adventures before they finally reach Bethlehem and Good triumphs over Evil.

“La Cantata dei Pastori” is still performed annually during the Christmas season in the environs of Naples. The play was written by Andrea Perrucci (under the pseudonym of Casimiro Ruggiero Ugone), a Sicilian-born, Neapolitan-bred poet, dramatist and stage director in his time. The original title was Il Vero Lume Apparrirà Tra L’Ombre (The True Light Will Appear Among the Darkness). His play combines commedia characteristics with those of the Italian medieval sacra rappresentazione.

The Archangel Gabriel appears, in traditional style, on stilts, and is portrayed by longtime company member and famed stiltwalker Mark Mindek, who has appeared in Metropolitan Opera productions, Disney Films, and special events around the world. The Devil is portrayed by James Karcher, actor and fight director whose broad range of credits include appearances as Benedict Arnold on The History Channel to a role in the movie Munich, directed by Steven Spielberg. As the Devil tries to stop the birth of Jesus, Mary and her powerful drum, assisted by the Archangel Gabriel, battle the Devil and save the day.

The Tempest Scene depicts Mary and Joseph crossing a body of water on their way to Bethlehem and, in true the popular street style of I Giullari di Piazza, their boat is a cardboard cutout fashioned in the shape of a bathtub.

Giuseppe De Falco is a commedia dell’arte master and has a special connection with “La Cantata dei Pastori,” having seen annual street productions in his native Naples.

Alessandra Belloni, a native of Rome, is known worldwide as a tambourine virtuoso, singer, dancer, and authority on the rich traditions of Southern Italy, with a passionate commitment to preserving the rich traditions of her culture. Her productions and performances nationally and internationally, with I Giullari, as a soloist, or as a guest at world music festivals, have been honored with many awards, including being selected as one of the best percussionists in the world by DRUM! Her most recent awards are a Folk Arts Master Grant from the New York State Council on the Arts as a Master Artist and Percussionist, and an Award for Achievement in the Performing Arts and Education by AIAE (Association of Italian American Educators). Belloni was featured in the documentary “Living Shamanism,” directed by Manex Ibar, was featured on a National Geographic documentary on spiders entitled “Spider Sex,” where she re-enacted the authentic exorcism tarantella, and has also been featured on ABC-TV Live in Chicago, GLOBO Brazilian TV, and the Russian travel channel, which reported on her annual summer workshop in Tuscany (held in Val d’Elsa, near Florence). She has performed at festivals and theaters in Brazil, Rome, Egypt, Australia, Israel, Poland, England, London, and around the U.S., and can be heard on CDs of the many I Giullari productions and concerts. Her diligent and extensive research into Southern Italian dance, music, and theater traditions has enabled her to participate in the creation of many shows for I Giullari di Piazza, including “La Lupa,” “The Dance of the Ancient Spider,” (premiered at Alice Tully Hall, Lincoln Center), “The Voyage of the Black Madonna,” “Stabat Mater: Donna de Paradiso,’ and more.