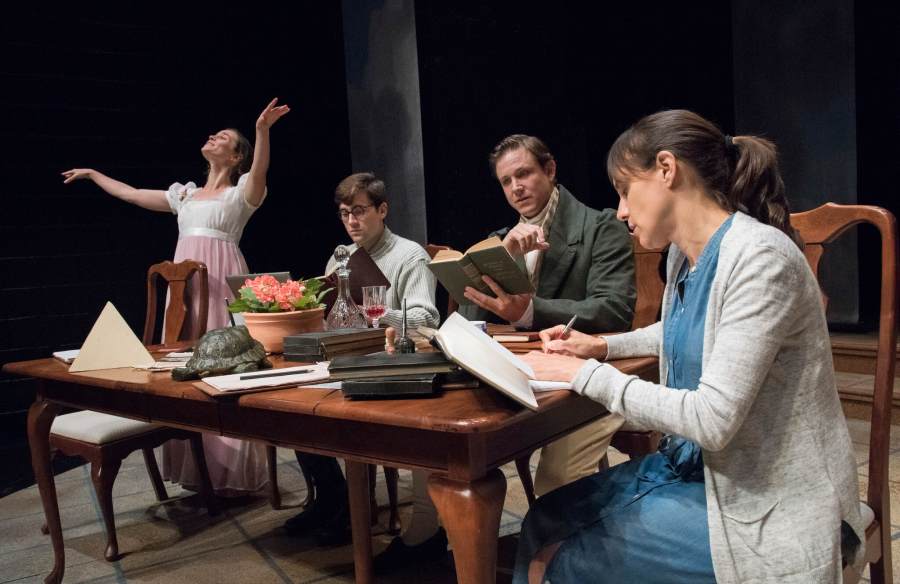 Words Through the Centuries

“Words, words, words,” intoned My Fair Lady’s Henry Higgins. If words are not your thing, this production is not for you. However, if you love language, humor and magnificent intelligence, don’t miss it.

Arcadia takes place in the drawing room at Sidley Park, a country house in Derbyshire, England, alternating scenes between the late 19th and early 20th centuries (until the last where they converge.) The first scene is set in the earlier era where we meet Thomasina, played a little too shrilly, by Caitlin Duffy, who is engaged in studying mathematics, her forte. She asks her tutor, Septimus Hodge, an excellent Andrew William Smith, what “carnal knowledge” means; he dodges the question and we’re off.

When we move to the 20th century, we meet an academic, Bernard Nightingale (Alex Draper who gets it mostly right) and Hannah Jarvis, (well-handled by Stephanie Janssen), a best-selling author working on a new book. Ms. Janssen, like many others in the cast, is slightly thwarted by the need for a British accent; the only one who pulls that off to perfection is Steven Dykes doubling as Jellaby, a butler, and Captain Brice, brother of Lady Croom, (Megan Byrne), the house’s super-aristocratic owner and Thomasina’s mother.

Lord Byron plays a large part in Arcadia but he doesn’t appear. In Stoppardian fashion, the playbill includes information on him; Capabilty Brown, the landscape designer; Newtonian ideas; relativity and the second law of thermodynamics, this intuited by Thomasina about two centuries before anyone else discovered it. The actors interweave these topics as their lives intertwine over the centuries. I found Hannah Jarvis’ line “It’s wanting to know that makes us matter,” especially resonant as the play touches on imagination, garden design, the Romantic vs. the Classic temperament and good old sex, “the attraction that Newton left out.” Calling this play witty or intellectual or both robs it of its charm and brilliance—it‘s way beyond. The Potomac Theater Project produces works that spark thinking and give audiences the opportunity to celebrate theatrical craft. As Cheryl Faraone, Producer and Director at the PTP, says, these plays allow us to connect with one another respectfully, an approach we badly need in our troubled times.

Mark Evancho’s scenic design is simple and effective as is the lighting by Hallie Zieselman that uses projections to good effect. Mira Veikley’s costumes are appropriate without going overboard.

PTP/NYC (Potomac Theatre Project) is presenting Arcadia in repertory with Pity in History. The company was founded in 1987 by the artistic team of Cheryl Faraone, Jim Petosa and Richard Romagnoli who continue to run it. Alex Draper is Associate Artistic Director. 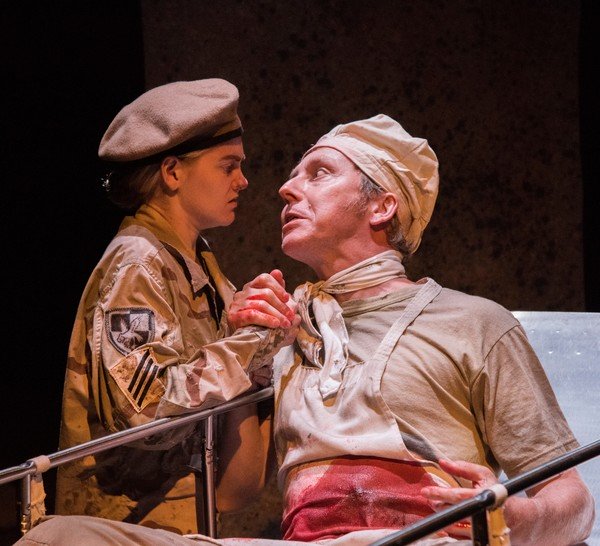 First produced as a teleplay by the BBC in 1985, Pity in History is entirely relevant to today. Although the work is a loose update of Britain’s 17th century Civil War if you don’t know anything about the history it doesn’t matter.

The war was a tension-filled time with Cromwell’s Parliamentarians fighting King Charles I’s Royalists. Property, art, religion and class structure were all important issues which British writer Howard Barker incorporated into his framework. The action takes place in an unidentified cathedral where a stonemason is working on a memorial for a wealthy widow. In another part of the building, a group of soldiers tries ignoring the dying—and bitingly sardonic—remarks of a cook, Jonathan Tindle, who can’t understand why God singled him out to be shot. “I was standing with the ladle making soup and this bullet comes through the canvass,” he says, clutching his bloody middle.

There are Shakespearean overtones along the way especially in Steven Dykes, playing Gaukroger, the mason, who is trying to complete a funeral carving with Pool, his apprentice, (Matt Ball), for the window Venables played by glamorous Kathleen Wise, all tight pink dress and long gloves. Philosophical Gaukroger can be earthy when he chides Pool about the absence of pickle in his lunch; he can also be utterly realistic when he points out that “Rain falls. Dogs bite. Nurses steal. Shall I go on?”

These performances as well as that of the chaplain, Croop, played with understated calm by Christopher Marshall, are beautifully nuanced and well-directed by Richard Romagnoli who has updated the setting to the modern day. War is absurd even as the soldiers insist “God is on our side” as soldiers so often have, while chaos takes over and art is destroyed. At the end, when the dead cook is lifted off a gurney, the tableau resembles Christ being taken down from the cross, a fittingly artistic reference.

PTP/NYC (Potomac Theatre Project) continues to redefine politically aware theatre for the 21st century by presenting theatrically complex and thought-provoking work of contemporary social and cultural relevance. Howard Barker is one of PTP/NYC’s most produced writers, along with Caryl Churchill, Neal Bell, Sarah Kane and David Edgar. The company’s writers are provocative, engaging and often confrontational. Pity in History is great theater for today. 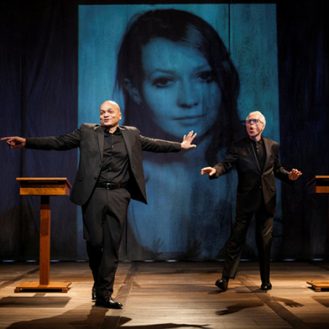