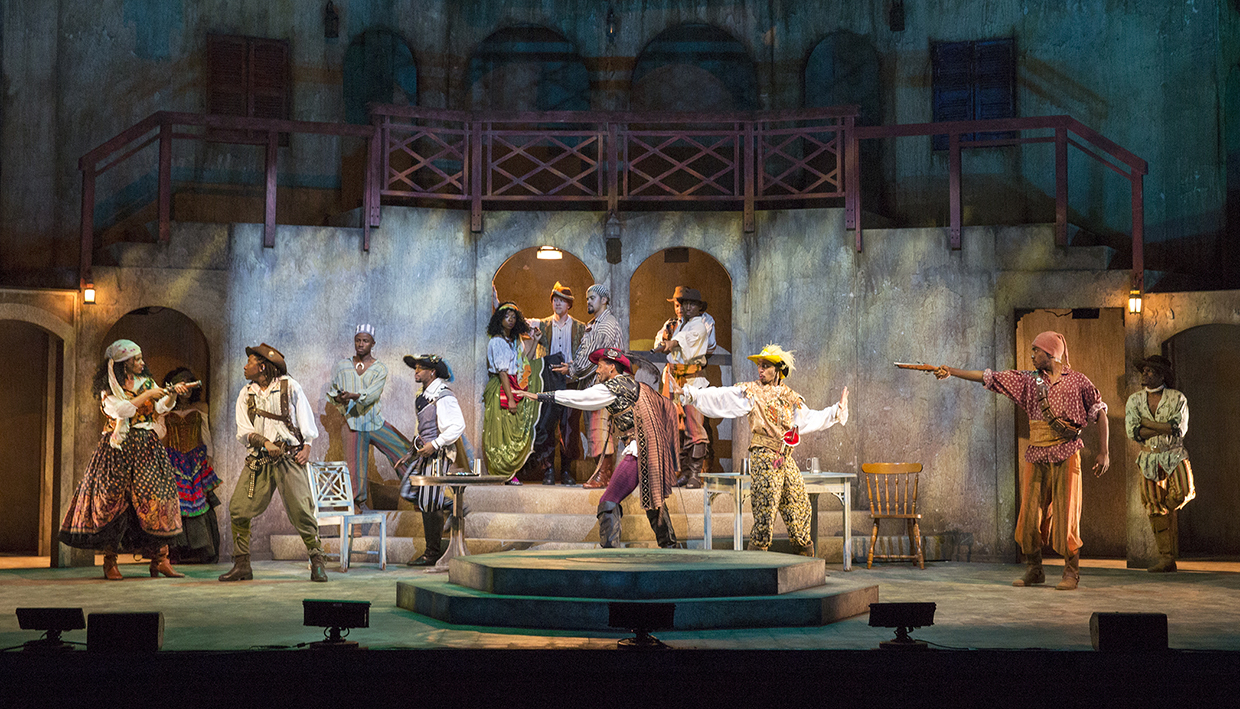 The Three Musketeers by the Classical Theatre of Harlem. Photo Richard Termine.

The Three Musketeers
by Catherine Bush, adapted from the novel by Alexandre Dumas
The Classical Theatre of Harlem
July 22, 2017

Hamilton meets Dumas with Lots of Swash and Buckle

It’s all for one and one for all in Classical Theatre of Harlem’s (CTH) The Three Musketeers written by Catherina Bush as adapted from the novel by Alexandre Dumas. Under the sky at the wonderful Richard Rogers Amphitheater in Harlem’s Marcus Garvey Park, the cast sings a little, dances a little, crosses swords a lot and generally has a good time.

Tiffany Rea-Fisher does fine work with the choreography producing plenty of spirited dancing and leg-kicking (with dancers courtesy Elisa Monte Dance) while Emmanuel Brown handles the fencing nicely as Athos, Porthos and Aramis take on the nasty Cardinal Richelieu and his “accomplice” Milady de Winter. Kudos also to Rachel Dozier-Ezell for splendid, colorful costumes that help set the piece in the 19th century complete with plumed hats, tights and doublets. Musical direction and composition is credited to Shayshahn “Phearnone” MacPherson who has positioned a small group of musicians onstage to accompany the action. Jenny Bennett directed.

The 19th century text has been updated with an Afro-Caribbean aesthetic so here and there the company falls into rap and uses contemporary moves as they deal with the story. In another bold update, D’Artagnan is played by a woman, (Miriam Hyman.) Gay is good as he/she falls in love with Constance Bonacieux (Ava McCoy) and no one bats an eye.

The play’s weakest link is the acting as the pitch is high to start and goes up. Everyone seems to be playing “can you top this?” with the result more exhausting than artistic. However, this is theater for everyone and the small boy in front of me was more than caught up in the proceedings as were a lot of people. This show is a knock-‘em, sock-‘em romp of non-stop action and what it lacks in subtlety it more than makes up for in energy and enthusiasm.

Since its founding in 1999, CTH has presented a repertory of works ranging from those of traditional classical playwrights like Chekhov, Euripides, and Shakespeare to established 20th century playwrights including August Wilson, Langston Hughes, and Jean Genet as well as new plays by emerging playwrights.

The company’s mission is to create a 21st century theatre company whose value to its community is inherent and essential, a company that is engaged in producing theater that has the capacity to change lives, and truly reflects the diversity of ideas and racial tapestry that is America. CTH is purposeful in seeking to create comprehensive access for theatre artists of diverse backgrounds. This includes actors, directors, designers, playwrights, technicians, and arts administrators.

The commitment is huge and the value, judging by the rapt faces of the audience despite a light sprinkling of rain, enormous. Hats off to CHT! Bring on more crowd-pleasers!