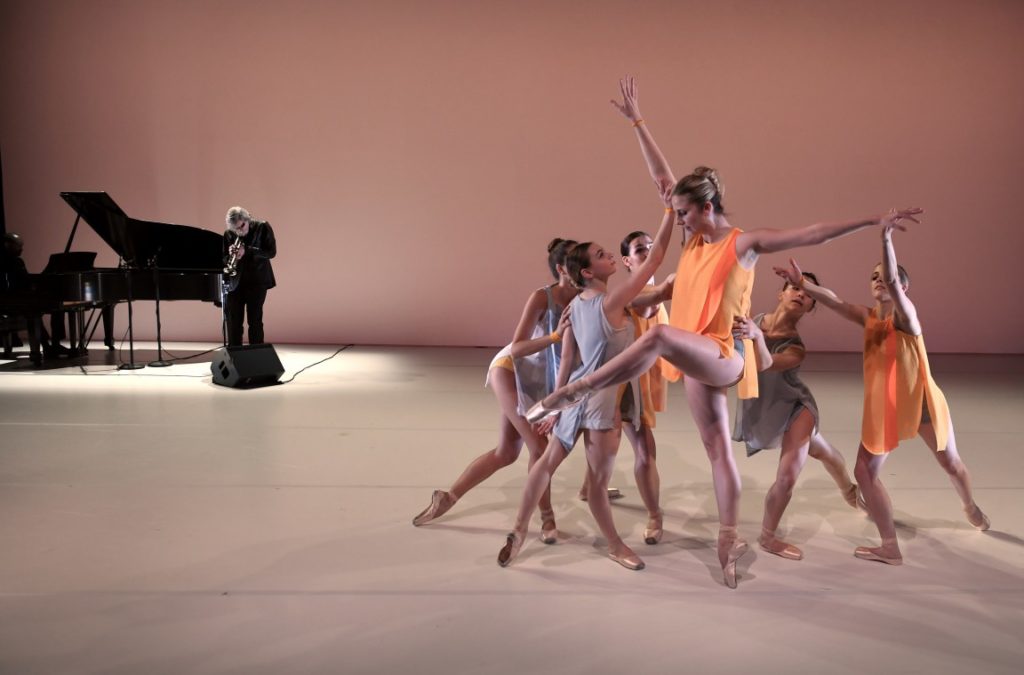 This company of all-female dancers, led by former American Ballet Theater principal Michele Wiles, has returned from a hiatus. The reemergence is reported to have been inspired by Wiles’ personal physical journey as a dancer through pregnancy, birth of a daughter and rebuilding her performance dance strength.

The evening’s program, four plotless works each making a world premiere and choreographed by Wiles, was marked by adequate though far from inspired dancing (and too much noise as pointe shoes struck the floor.) The choreography was a little timid although Experience, the second work, performed with muscular attack by Violetta Komshyan and Natalie Stys, says a lot about female strength, a resonant topic in this #MeToo age. Both women are toned and supple, performing lifts and arranging themselves into positions with an almost fiercely- gymnastic quality.

Vibrer, the final piece, was accompanied by acclaimed trumpeter, Tom Harrell, with Danny Grisset on piano playing Harrell’s composition. Harrell, widely recognized as one of the most creative and dynamic jazz instrumentalists and composers of our time and a multiple Grammy nominee, is a truly terrific trumpet player. As I wasn’t forewarned, I was distracted by his appearance—head down almost on his chest, tremors, all the result of medication he takes to manage a health condition. Costume coordinator Victoria Bek turned out the six dancers: Egle Andreikaite, Violetta Komyshan, Alice Regnouf, Natalie Stys, Bailey Anne Vincent and Michele Wiles, in short tutus, three in striking orange and three in blue — the jagged music did the rest. As the jazz picked up, so did the dancers who let their hips and eloquent hands along with a modified shimmy, take over. Brandon Stirling Baker’s lighting with softly vibrant color changes enhanced the work.

Follin, partly set to taped, insistent music by Phillip Glass and partly to a live rendering by Elliott Figg on piano and Angela Kim on violin, incorporates a poem by Robert Frost read aloud and interpreted in American Sign Language. The choreography, that includes references to ASL, is by Michele Wiles and Bailey Anne Vincent, a dancer with long term hearing loss that began in her teens. At times one dancer’s movements didn’t precisely echo the others; perhaps to serve as a reminder of the positives of being different? However, some of the work’s transitions were abrupt so the piece didn’t entirely coalesce. That and a lack of innovation bothered me throughout the evening as did the way the dancers mostly failed to relate to one another even when touching. I also missed a point of view, admittedly hard to convey when none of the works has a story line or even a hint of character. Other than the admirable goal of dancing to live music, the evening left me less than fully satisfied.

From statements I’ve read, Wiles comes across as a thoughtful, sensitive woman. Let’s hope her vision for the company continues to develop and expand.