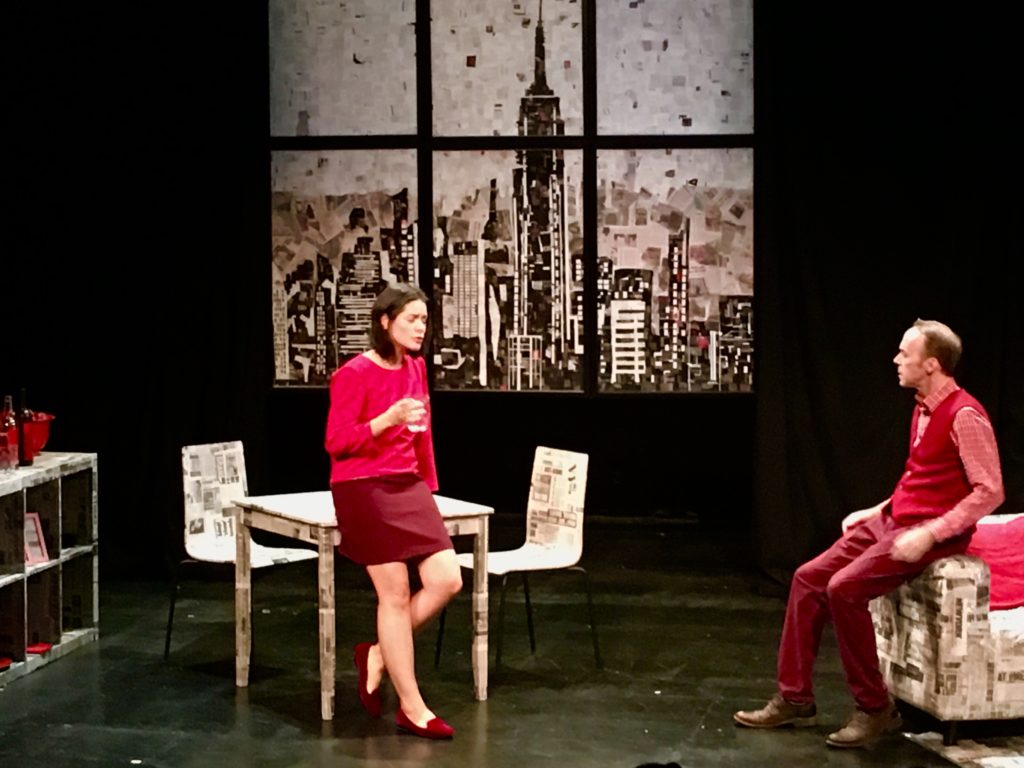 There are not so many opportunities left to see Rodrigo Nogueira‘s The Ideal Obituary (at The Tank, March 16, 17, 22, 23 and 24), and, in the interests of getting the word out as soon as possible, this review will be shorter than this rich, multifaceted play deserves. Returning home directly from the performance, I find myself buzzing with thoughts and feelings about what I have just seen.

Mr. Nogueira has an impressive track record back in his native Brazil, with 15 plays and 5 musicals, as well as books and screenplays. Now he has decided to move to New York. This is his first play since his move, which he wrote in English, as a complete rewrite of a rather different play he wrote some years ago in Portuguese. He manages his adopted language brilliantly, most impressively in the doubles entendres which are not only a major part of the play’s diction, but in the resulting misunderstandings they become pivots on which the story turns.

This story concerns a married couple—the wife just 30 and the husband 39—brilliantly played by Liliana de Castro and Kevin Loreque. Their sensitivity and warmth bring the feelings of a troubled but loving marriage to life. If the marriage is not quite on its feet, it is potentially a happy one. De Castro’s beauty and Loreque’s almost uxorious devotion make us want them to be happy.

However, when we meet the wife, she is very unhappy. Inert and zombie-like, she sits in front of the television without having bothered to turn on the lights. Her husband enters and corrects this, beginning carefully orchestrated preparations for dinner, which are intended to draw her out of her depressive stupor and engage her in their connubial life. The husband’s efforts meet with no success at this point, but a connection, affection, and even sexual attraction emerge as part of their lively relationship. The wife’s enthusiasms revolve around a morbid axis, however. In order to help her feel some emotion, her husband takes her to funerals, especially pathetic ones, with perhaps a very young deceased, whose life has ended by some especially cruel agency. The couple scan the obituary page and the police reports in search of an obsequy she will find piquant and poignant. She is obsessed with the idea of finding the very pit of grief within herself. Her husband, a mathematician and tinkerer, invents a device to measure her grief through the sound of her crying. His mathematitian’s mentality creates something like a Platonic belief in forms in the household, and this idealism becomes dangerous—a prelude to an undesirable contemporary version of a Wagnerian Liebestod. Faced with frustration with her almost pornophilic pickiness about prospective funerals, he asks her to write an ideal obituary, which she does…

The Ideal Obituary is engaging, funny, and powerful, but it is also profound. The absurd psychological comedy of the relationship follows a tragic inclination, with acid satire of our contemporary trash culture, and the thought that ideal love may only exist outside the bounds of life. We live in the most degrading of times, and the wife’s depressive response is all too easy to understand. In her obsession with funerals, she is in her innermost heart seeking a ritual in which human feelings and emotions are real, and connected with a real situation and ritual words and actions that recognize, welcome, and include her humanity. As deeply as this flows, she and her husband can still make a game of their habit of attending the funerals of absolute strangers, and quite a competitive one at that, but not devoid of mutual appreciation. A century or two ago, she might have had a place in society as a professional mourner.

I have not seen in some years a new play of such rich wit, power, and thought. I have already praised the actors. The Tank, which produced the show, presented a polished production in its excellent new space at 312 West 36th Street, with striking sets by Anderson Thives (internationally renowned collage artist), lighting design by Kia Rogers (NYIT Award Winner for Jane The Plain with Flux Theatre Ensemble) and sound design by Fan Zhang. Above all, in Rodrigo Nogueira, we have a brilliant new playwright among us, who is capable of expanding the stage to new challenges of imagination, feeling, and intellect. 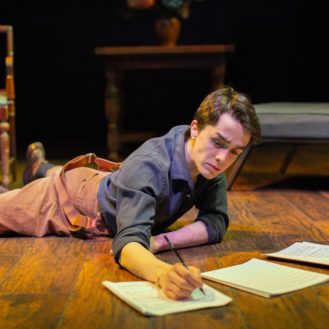 Real, a Masterpiece by Rodrigo Nogueira, at the Tank, closing January 20th.