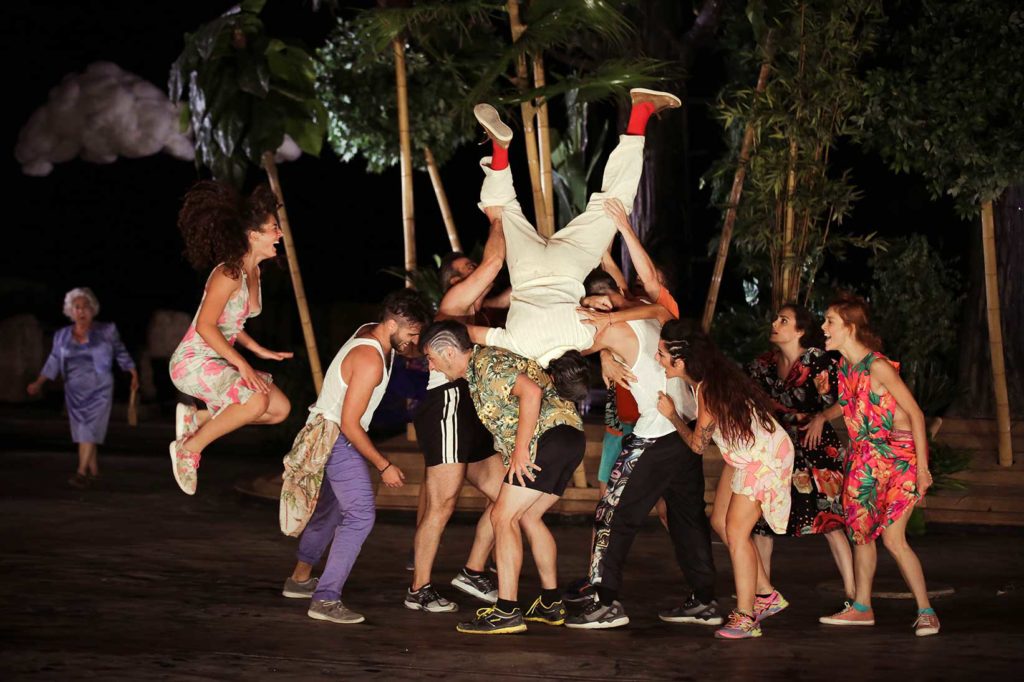 A Scene from Aristophanes’ The Birds. Photo Kiki Papadopoulou.

A Little Cuckoo and a Lot of Noise

Noisy, energetic, sometimes exuberant and frequently chaotic, it’s hard to encapsulate this performance at St. Ann’s Warehouse. It was also difficult to follow the actors as the “supertitles” were on screens on either side of the stage requiring me to move my eyes away from the Greek-speaking performers. (That the words on the titles were often ahead of the action also didn’t help.)

Aristophanes wrote his play, presented as part of the festival of the City Dionysia in Athens, in 414 BC, when democracy was under threat. These birds are mad as hell and not going to take it any more as they indicate with lots of stomping and furious dancing. They also cluck and squawk in bird-esque communication, inherent in their mad, mad world. The humans they come in contact with aren’t a great bunch nor are the gods we meet so it’s hard to fully root for any group.

In brief, the play is about those angered by the corruption of politics who seek a better place for collective living. They create a new settlement among The Birds in Cloudcuckooland, (a term coined by the playwright signifying an unrealistically idealistic state where everything is perfect), and try to establish an optimal community embracing equality, temperance and fairness. It doesn’t work as planned as the new world they embrace is also angst-ridden and far from perfect.

As presented, the play is raunchy, messy and full of recognizable tropes, among them heavy physical comedy and the anthropomorphization of animals and animalization of humans. The three angry birds shake their bare breasts; other actors remove clothing with abandon and everyone races around like mad. Yet the evening never came together although certain aspects, especially the globe-like structure passed around over the stage and audience, the cleverly-crafted trees and the onstage band with wildly energetic music by Angelos Triantafyllou’s are a lot of fun. At the end, I felt a little spaced-out as though I’d released a load of pent-up energy.

The Birds is directed by Nikos Karathanos who adapted the text with Yiannis Asteris; Karathanos also plays Pisthetaerus, one of the central characters. The work is not played as a linear narrative but, per Karathanos, as “a weird and outrageous experience.” Yes, indeed. This production is the centerpiece of a citywide series of talks, exhibitions, concerts and more exploring themes ranging from political satire to democracy to social and political awareness and has been coproduced by St. Ann’s Warehouse and the Onassis Cultural Center.

Take it as a rollercoaster ride of sensory experience and much is entertaining; try and be too literal and it doesn’t work. Listen to Karathanos: “Aristophanes …words reveal an entire universe. In The Birds he takes us on a flight to the incredible. To an earth-shattering revolution….to the longing for another life.” Many of us relate to that longing. If it isn’t fully realized—and certainly not resolved– in this production, that’s human nature. Meanwhile, submersing oneself in a crazy, jubilant mess for a few hours is a fine release. 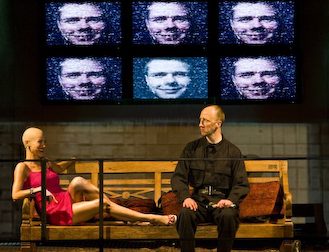