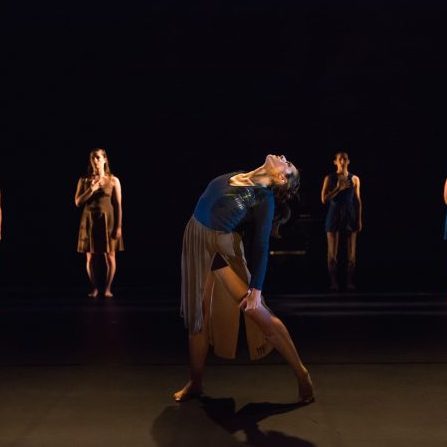 As part of a celebration of women, this program of about empowering female expression featured work choreographed and mostly performed by women. For me, the three most successful pieces were Ne Me Quitte Pas, a modern apache duet with Chad Levy and Alyssa Weidman; Shakambhari, a full-throttle, almost-Bollywood-style, turquoise-and-orange swirl and No Exit, a pure rush of movement danced all out by Levy, Weidman, Lisa Borres, Caitlin Sheppard, Julia Neto, Jillian Foley and Parker Heren.

I would have enjoyed the opening number, She, more but for the “music,” credited to Stefania de Kennesy that pounded intensely. According to program notes, it is set to  “layering breast pump sounds,” which I hope are gentler in reality than onstage. The number is explained as “delving into the emotional waves of motherhood,”which didn’t come across.

Shakambhari, created by choreographer Amy Marshall, shows us the Hindu goddess known as the “divine mother, The Bearer of the Greens” who helps nourish her people in times of famine. Lifts, pedaling legs and great energy defined the piece which, together with vibrant music by Bikram Ghosh, The Sacrifice and Acupella and Udu To Yuto, Tumbara, moved with enormous energy. Classically Indian flexed feet and arm movements right out of Indian miniatures together with lifts and processions with the deity made this a pleasure to watch.

No Exit was enlivened by jumps, joined hands, danced with enthusiasm. Ne Me Quitte Pass is also an athletic work set to the music of Jacques Brel with a touch of ferocity now and then. The red and black costumes and red background are reminiscent of the tourist Paris of long ago; the permeating sadness recalls the deliberately arty manner of the lost Left Bank.

Although the whole piece wasn’t successful, the pendulum arm movements in Necessary Evil were original and entertaining. At the start of the work it seemed as though the androgynous women might be readying for some sort of test with spoken commands to “look left, right, breathe in, hold it….let go.”

As to the rest of the performance, much of the choreography is repetitive, especially the last work on the program, No Words, a reference to turning a blind eye to sexual assault, that left me unmoved. The dancers are toned and graceful, displaying beautiful timing as they dance in unison with finely honed clarity but sometimes it felt as though they were aiming for an emotion too far out for them to capture.

Ariel Rivka Dance (ARD) is an all-female contemporary dance company founded by married choreographer/composer team Ariel Grossman and David Homan whose not terribly distinguished music accompanied For Her and No Words.

Chanel DaSilva, choreographer of Necessary Evil, has taught master workshops and choreographed works for schools, universities and companies across the nation such as The Juilliard School, LaGuardia High School, Harvard Dance Project and Idaho Dance Theater.