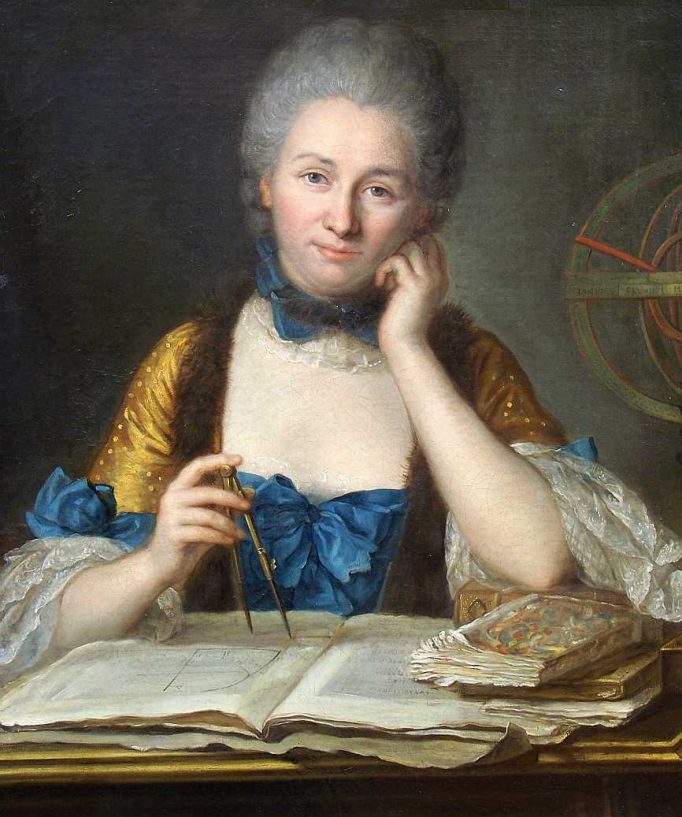 Emilie du Châtelet was born in Paris in 1706, in an era when women were raised to be ornamental wives and mothers.  Luckily for her and for the ages, she was educated by her father, a high official in the court of Louis XIV, and showed a strong interest in and an aptitude for science and mathematics at a young age.

The play centers on the difficulties of being a woman intellectual in a time when being a wife—and often a mistress—were what counted.  We see Ėmilie and Voltaire, her lover, in various situations as well as Ėmilie and her husband, the Marquis du Châtelet, who was conveniently absent a great deal of the time due to his position in the French army.  Ėmilie also dallies with Pierre-Louis Maupertuis, in actuality a scholar although portrayed here as a young courtier.

She became fascinated within the work of Isaac Newton, which was somewhat controversial at the time in France.  Together with Voltaire, Émilie wrote a book, Elements of Newton’s Philosophy, which explained Newton’s astronomy and optics so that a wide French readership could understand the science.  Only Voltaire’s name appeared on the book.  At age 42 Émilie du Châtelet again became pregnant, a dangerous condition at her age.  (She had several other children, not all her husband’s.) Aware that it was likely she would die, she began working around the clock to complete a French translation of Newton’s Principia.  She achieved her goal but not by much, dying a week after giving birth to a daughter.

This interesting historical drama would benefit by a better production.  Émilie’s role was –apparently unexpectedly–taken by the director, Myrian Cyr, who tries hard but hasn’t yet mastered her lines often throwing others off although her direction is clear and able.  The venue isn’t kind to the actors who must deal with ambient noise from people in the lobby and inadequate lighting as well as tatty costumes and wigs. Everyone sings well during the musical interludes that sometimes mark the passage of time and David Beck, as Maupertuis, plays and sings well simultaneously. Overall, the voices are excellent. Jonathan Tinder gives a decent performance as Voltaire although he makes him a bit pallid  and tries too hard to display his wit while Sarah Oakes Muirhead as Françoise de Graffigny, Ėmilie’s cousin, snaps her fan and tosses snippets of malice around—not all of them clearly audible.

It’s too bad that Ėmilie du Châtelet is largely remembered for her relationship with Voltaire. In 1728, when the Secretary of the Academy of Science affirms Newton’s calculation of the force of moving bodies: Force=Mass x Velocity, Ėmilie corrects his mistake in an open letter printed in the Journal of Science: Force=Mass x Velocity squared.  The Secretary strikes back with:  “Your female condition is the source of your illusions.”  But Ėmilie turned out to be right and Newton wrong.  She had a brilliant mind and made her own social and intellectual terms, even when they didn’t run according to the period’s norms.  Poor Ėmilie and too bad for Lorraine Liscio, the playwright of Moving Bodies.  She has an interesting story and would be well served with a better production to showcase it in.