The Yeomen of the Guard by NYGASP. Photo William Reynolds.

I Have a Song to Sing,O!

Yeoman of the Guard is often heralded as one of W.S. Gilbert’s finest scores with its many fluctuations between joy and despair. It’s the only Gilbert and Sullivan operetta I know that ends with a stricken—possibly dead—character rather than a stage full of newly or about to be married characters.

The performance, by New York Gilbert & Sullivan players, directed and conducted by Albert Bergeret, was outstanding. Performers, voices, set and costumes captured the tone and pseudo-Shakespearian setting to perfection with all elements coming together in delightful harmony. James Mills as Jack Point the jester, Laurelyn Watson Chase as Elsie Maynard, Abigail Benke as Phoebe Merrill and Matthew Wages as Wilfred Shadbolt were particularly strong although the entire cast sang beautifully and interacted effectively. Mr. Wages did a fine job with the Head Jailor and Assistant Tormentor’s black humor while Ms. Benke made it clear that she was giving in to his demands only because she had to, not because her heart was in it. Costumes, credited to Jan Holland, are colorful and on the spot including the Beefeater uniforms by Gail J. Wofford and the dresses with aprons and hats for the women of the chorus. I was delighted when, in Act II, Jack Point appeared in full jester regalia because his first act clothing made him blend in a bit too closely with the rest of the ensemble.

If I had a quibble, it would be that sometimes Ms. Benke is overmiked so her voice is a little shrill and now and again the tempo of pieces seemed a little slow.

The operetta, subtitled The Merryman and His Maid, was first performed at London’s Savoy Theater in October1888. In contrast with most G & S operettas which open with the chorus, Yeoman begins with Phoebe sitting at a spinning wheel singing a ballad that bemoans woman’s role as she waits for love to find her. The work includes typical touches including a patter song for the jester (Oh! A Light-Hearted Loon) which I’ve never thought was one of the great ones; several a capella quartets of which Strange Adventures that includes Angela Christine Smith as Dame Carruthers and Sarah Hutchinson, as Kate, was particularly well-handled and the poignant I Have a Song to Sing,O!, sung by Elsie, Point and the chorus. There are the typical plot lines involving assumed identities and misunderstandings and bits of pleasant, if unremarkable, dancing choreographed by David Auxier.

At the very end, Jack Point, distraught as he watches his adored Elsie leave with her new husband, seems to collapse from shock, a better approach than some I’ve seen in which Point appears to die of a broken heart. From what I’ve read, George Grossmith who originated the role, fell and then waggled his toes to indicate that he was still alive.

In actuality, the title characters are Yeoman Warders who guard the crown jewels and the Tower of London where the action is set; today the Warders act as guides for the Tower. Apparently Gilbert didn’t care about this fact when he named the work. However, he and Sullivan did take care to replicate the Tower as closely as possible down to the tolling of the bell that closes Act I as a signal that an execution is about to take place.

Yeoman has less satire than other G & S works and is more an opera than most of them. New York Gilbert & Sullivan Players got it right almost consistently. A big bravo. 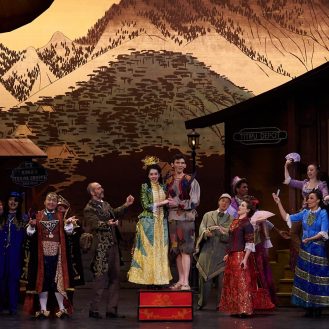 A Politically Correct Mikado (with a Dash of Keystone Kops)