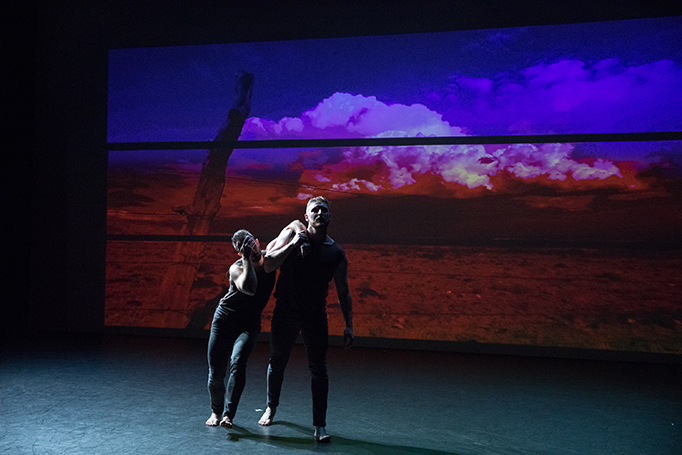 This land was and still is very important to the Native American people who inhabited, crossed and built civilizations here.

The video design by Josh Higgason projects dramatic images of the area—pouring waterfalls, vast plains, interesting rock formations. Unfortunately, the dancing didn’t  compete with this magnificence as it relied heavily on clapping and foot stomping with patterns reminiscent of square dances that were repeated several times.

The dancers, Alex Biegelson, Alison Clancy, Chelsea Ainsworth, Doron Perk, Isa Santamaria, Jessica Smith, Stephanie Terasaki and Will Tomaskovic, are athletic and supple but the work lacks emotional focus: the piece didn’t arouse anger, outrage or any other emotion at the way these lands are being treated. In fact, were it not for the program notes I wouldn’t have had any idea that this was the central idea. We read that “Bears Ears is a place of renewal and signifies a portal to the world of something more ephemeral, even sacred, “yet the work fails to build on this statement.

There were some graceful one-legged balances and a short, dramatic interplay between two of the women dancers. The human chain that wound and unwound looked as though it might develop in an engaging manner but didn’t. The music by Scott Killian incorporated a lot of drumming, presumably in service to Native American ritual. However, it went on too long as did the entire piece.

Detour, the second piece, also didn’t catch fire except when Stephanie Terasaki was onstage. Her arresting presence and great flexibility make her worth watching. At times the black and white spiral projections, again by Josh Higgason, were reminiscent of Hitchcock’s Vertigo but to what avail? The white-clad dancers often looked out towards the audience as though searching—perhaps trying to find their way? The music was annoying and so grindingly incessant I and my immediate neighbors agreed we were delighted when it ended.

The program notes are a riot of dance-speak, insisting that ZviDance is “constantly evolving and refusing to succumb to dialectics of the medium.” What I saw was a jumble of steps that failed to enlighten, inform or entertain. The audience needs a focus: interesting action, interplay of feelings, something that touches either mind or heart.  As it was, the evening was abstruse and vague. We don’t want to be told that ZviDance brings a “passionate vision of community”—we want to understand that through the work.

This company has performed at the Brooklyn Academy of Music (BAM), Joyce Theater, and Lincoln Center Out-of-Doors; has toured in North America and in Germany, Poland, Russia, Israel, Colombia, Brazil, Ecuador and Japan. 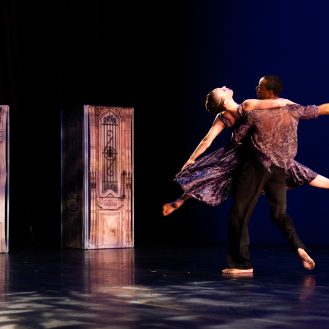