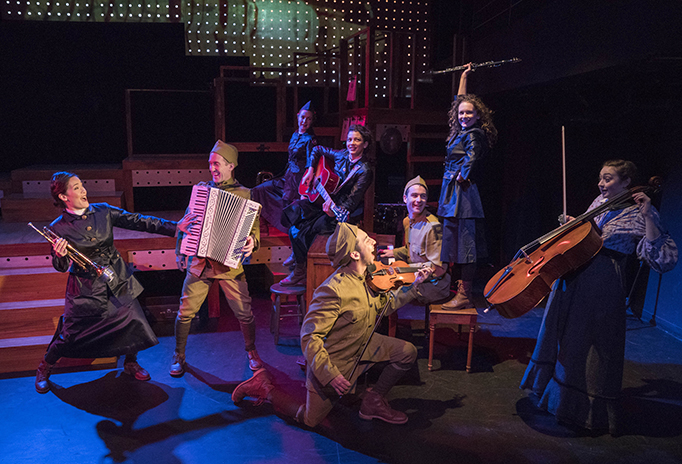 Hello to a World at War

Technically The Hello Girls were the Signal Corps Female Telephone Operators Unit, telephone switchboard operators who were sworn into the U.S. Army Signal Corps during World War I. The corps was formed in 1917 by General John Pershing in hopes of improving the state of communications on the Western front. Over 7,000 women applied but only 230 of them, many former switchboard operators, all bilingual, actually went to France.

The experiences of five women stand in for the sisterhood of all Hello Girls, (who got their colloquial nickname as they said “hello” when connecting calls), in this spirited musical. Characters are inspired by actual women and men with “creative liberties taken and some primarily fictional.” The casting call must have been fascinating as the Prospect Theater Company sought—and found—performers who act, sing, play musical instruments, display tremendous agility and speak French.

We see the women being recruited, training, going to France, being sent to the front lines and finally returning to civilian life. But, instead of being honorably discharged, these brave, dedicated women didn’t receive veterans’ benefits because Army regulations stated that only males could be sworn in and accordingly treated the women as civilian contractors. It took until 1978 for Congress to approve veteran status for the remaining “Hello Girls.” Talk about battering against a khaki ceiling.

All the performers are terrific especially Ellie Fishman as Grace Banker, leader of this band of sisters, who has great presence and a lovely voice.  Catherine Wake is charming as Louise LeBreton, a fine clarinet player whose character was born in France accounting for her excellent accent. The rest of the cast includes Arlo Hill, as Lt. Joseph Rizer, percussion; Chanel Karimkhani as just-off- the- farm Helen Hill, cello;  Andrew Mayer as Pvt. Dempsey who doubles in other roles and plays violin and piano; Matthew McGloin as Pvt. Matterson, accordion and piano; Ben Moss as Lt. Wesson , piano; Lili Thomas as thirty-three year old, married Bertha Hunt, on bass and piano; Skyler Volpe, as Suzanne Prevot, on guitar, and Scott Wakefield as the somewhat pompous, punning Pershing on bass.

The music and lyrics by Peter Mills is often rousing, sometimes sentimental and just a little too repetitive although the intermingling of music and story is effective. The best numbers include the title song, Answer the Call and So Good So Far in which the women muse over letters to and from home. Scenic and production design by Lianne Arnold together with lighting by Isabella Byrd makes clever use of projections that anchor the story as does the backdrop that alludes to period switchboards.

Although there are arguments and misunderstandings between characters, the script lacks dramatic punch and its most powerful moment comes in the epilogue when the injustice of the Army regulations is spelled out. The history of these first female soldiers is fascinating and it’s worthwhile learning that it took them decades to achieve the recognition they deserved. The Hello Girls provides a musical look at a group of women who more than did their part to help secure an Allied victory far from home.