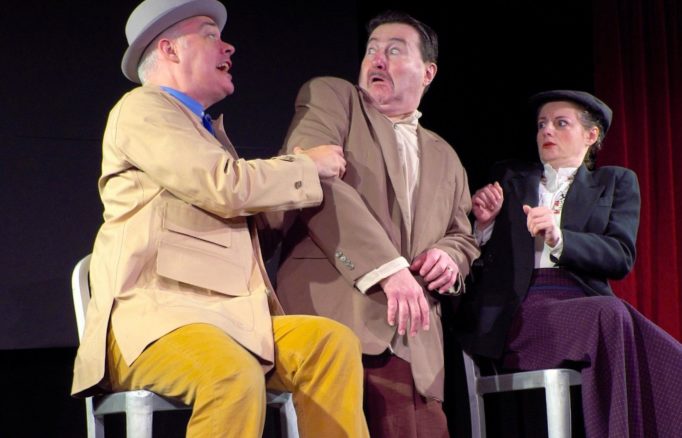 A Scene from Tevye Served Raw.

Tevye and Co. Long Before Broadway

Before we thrilled to Fiddler on the Roof there was Sholem Aleichem, the most beloved Jewish writer of the modern age who produced short stories, plays, literary criticism and more. Tevye Served Raw distills these, concentrating on the Tevye the Dairyman stories, to remind us of the essential sweetness-cum-pathos of Aleichem’s life and his genius.

Multi-lingual and majorly talented Shane Baker, Allen Lewis Rickman and Yelena Shmulenson speak Yiddish and English with the Yiddish translated via on-screen projections. Even minus the “super titles” you would figure out what’s going on because the stories dramatize classic situations: a father’s love for his daughter even though she loves a man he objects to, three gossips on a train, letters from a husband to a wife and back. One particularly powerful scene portrays Tevye and Golde trying to convince the Russian priest to “return” their daughter, a look at the plight of Judaism in a world of powerful Christianity.

This Tevye is a small work that elicits chuckles, not guffaws; sniffs, not sobs. The actors work hard and even brings the audience into the act—towards the end a man was summoned to the stage to read the Hebrew alphabet while Shmulenson, as the real Aleichem’s nasty stepmother, screams curses that we learn young Aleichem wrote down and turned into A Stepmother’s Trash Talk, perhaps the first step in his illustrious writing career.

According to Rickman who is also the show’s director: In creating the show, “We went back to what Sholem Aleichem, who was there in the shtetl and saw it all himself, actually wrote. It’s his words, his observations, unfiltered, authentic. We’re not a big production with wonderful songs and lots of dancing. But if people want to get a sense of where most American Jews actually came from, this is the real thing. The characters in our show are the people that were there, not exaggerations from musical comedy.”

It’s delightful to see the Tevye characters—his wife, daughters, the local Cossack authority—interpreted from the inside out with minimal costumes and a smattering of original music by Alex Ryaboy that bridges the interludes between vignettes, for that is what these small bits are. As Rickman notes, the work is entirely authentic. All three actors are sensational, with special applause for Shmulenson who takes on different characters like a chameleon.

You certainly don’t have to be Jewish to enjoy what this touching show offers. Within the tiny confines of The Playroom Theater it celebrates what makes us interconnected humans with the attendant joys and sorrows. Tradition? Yes, of course, but also a good look at the work of Sholem Aleichem, Yiddish insults, family feelings and the underlying fears of Jews in a Christian world. The show is an appealing combination of sadness and humor, served as the sub-title puts it, garnished with Jews.

Tevye Served Raw has been in development for over two years, performed in Los Angeles; Kiev, Ukraine; Toronto; and Massachusetts, among other places. In October the production played to ecstatic acclaim in Romania, where it was presented with Romanian supertitles at the State Jewish Theater in Bucharest.