Which Way to Turn?

Crossroads, the premiere of an evening–length work in three parts with choreography by Amanda Selwyn and company is abstract with a focus on decision-making and what an often disturbing process this is. It was exhilarating to watch the very well-tuned dancers move in solos, duets, trios, and sometimes as a complete group, each showing inner strength while maintaining an essential understanding of personal place and where their bodies fit into the space. There were a few literal gestures such as mild smiles on faces during duets suggesting an emotion less intense than joy and perhaps more like a fleeting sense of pleasure. The most concrete moment came when Isaac Kerr bit into an apple which he then handed off. I thought of the fruit of knowledge and the Garden of Eden especially when Kerr essayed a momentarily wry expression before turning to join the other dancers. For a second he seemed all-knowing before he blended himself into the company. Was that second when he reached a decision? Decided for or against an action?

At certain times the dancers seemed to express a wish for intimacy although their groupings didn’t imply romance or desire. There were many sharp, angular arms and legs and an outpouring of high energy as well as fluid turns and lifts which appeared effortless although only highly athletic dancers can pull off such moves while making them look easy.

Gestures using arms and hands both when upright and when putting full body weight on the arms to launch a low turn were arresting, speaking both to the dancers’ physical strength and the unrelenting intricacies of Selwyn’s choreography.

According to Selwyn, some of her inspiration for the work relates to Rene Magritte and M.C. Escher, both usually described as artists of the surreal. Magritte’s clouds can be white, puffy, and almost suggest a gratified state of mind or simply suggest that time is standing still. In Crossroads, essentially about indecision, this echoed in terms of mindplay as when someone hesitates, unsure of which direction to take. Stairs, another form the choreographer says informed her thinking when making the piece, are prominent in Escher’s work that often depicts staircases that don’t connect people in the same space as they inhabit what are known as different “gravity sources.”

Part of the set design included variations on stairs, often involving two-part white platforms moved and rearranged by the dancers. In one sequence, the company moved across the stage from left to right in distinctive ways as they approached, progressed and exited the steps. There was arm pumping, a sort of exaggerated version of the movements made by runners warming up, as well as entrances on one foot, with arms akimbo or with sharply flexed feet. At another point the dancers sat or lay on the steps that served as platforms while lights from above formed beautiful stylized flower patterns on the floor. Lighting by Dan Ozminkowski helped intensify the work throughout as did costumes by Anna-Alisa Belous that ranged from blue tunics to crimson unitards larded with sparkle. Belous is also credited with scenic design which included three and four-part columns, (reminding me of the look of bamboo), that lit up from within showing different colors. The colors and different placements of the columns was highly effective in that the look and direction of the steps was completely altered.

The tri-part canvas shapes painted with decorative “gates” were just as, or perhaps even more striking and served as another homage to Magritte and Escher as both artists’ made works featuring doorways that lead nowhere. Near the end of Part II, one at a time the dancers opened the shapes as if going through a door, went inside and closed it. Where has she gone I wondered? Was he signaling a decision reached? There isn’t an answer except that knowing and not knowing is part of the surrealistic landscape that underlies the entire work. That there isn’t an answer didn’t matter—one minute the dancer was onstage and the next, he or she had vanished. It was as thrilling as a magician’s sleight of hand and a lot more physical.

The one bit of set design that bothered me was something resembling a plastic bubble that could have been a child’s chair. Not only was the piece itself unattractive, the way it was dragged on and offstage containing a dancer was inelegant and at odds with the overall elegance of the work. 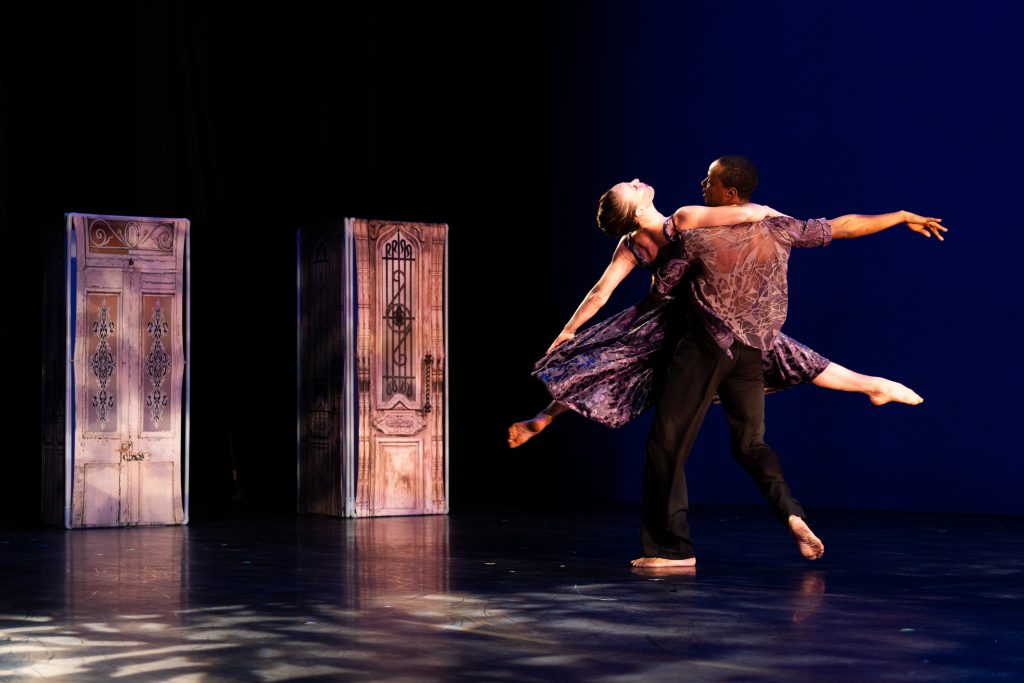 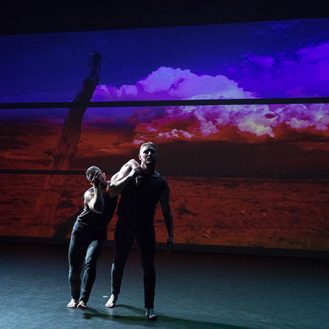