Gloves on at the Palace

Anglophiles, those with a taste for recent British history and anyone who would like a look back at a non-PC world will enjoy this entertaining gabfest. Writer Moira Buffini has imagined a lengthy series of interchanges between Queen Elizabeth and her Prime Minister, Margaret Thatcher, sprinkling these liberally with references to events they shared. The transition from Rhodesia to Zimbabwe, relationships with President and Mrs. Reagan, Charles and Diana’s wedding, the Falklands and a much else gets a brief look at as two Queens, (Anita Carey as Q and Beth Hylton as a younger version dubbed Liz), and two Iron Ladies, (Kate Fahy as T and Susan Lynskey as the younger Mags), meet repeatedly, talk about what passed for state business and drop asides.

Handbags themselves are intrinsic to these women, worn prominently on the arm gracing very appropriate suits, each with a pin on the left shoulder—Mrs. Thatcher’s both in her signature blue.

The women are primly cordial but never close, (“There was no intimacy with her; no letting down of hair”), the Queen notes of Thatcher in an aside. Of course no one knows what really transpired but it’s clear that while there was a degree of respect, they were very different women—one raised to be Queen; the other highly educated as a research chemist before becoming a barrister. As Liz says “I never went to school.” Liz and Q both brighten every time a dog or horse is mentioned; as Mrs. Thatcher sips tea and is asked if she will be bringing pets to 10 Downing Street, she allows that she “believes there is a cat.” Animals, upbringing (the PM began life as a grocer’s daughter) and personal world view divides their takes on the world at large and the UK in particular.

The evening feels a little stretched, possibly because Buffini originally wrote Handbagged as a one act play. When it first opened in the extended version in 2013, Buffini and Indhu Rubasingham, director of this production and the artistic director at the Tricycle (now the Kiln Theater in London) where it was first produced, were concerned because another play about the Queen and Thatcher, The Audience, was about to open. She needn’t have been as there is no resemblance between the two.

This work produces lots of chuckles and a few big laughs even as we see that both women are essentially solitary, and probably lonely, figures. Born six months apart, and meeting for eleven years over tea, the women share only the most formal working relationship. The monarch tries to advise the PM about issues like Northern Ireland and the Falklands war but Thatcher ignores any possible help. We get a slightly deeper look at the PM’s uncompromising character than we do at the Queen who remains an enigma, shaking hands with an unseen public and making small talk.

The four women actors are well-cast. Almost more entertaining are Cody Lee Wilson who assumes multiple roles from a palace functionary to Nancy Reagan complete with red suit and matching red handbag and John Lescault who takes on parts ranging from Dennis, Thatcher’s husband, to Prince Phillip. The actors often speak directly to the audience, as when Q faces front to point out “this story will be between us and these three walls,” in case anyone missed the obvious. The actors also underscore their remove from reality as when the senior Thatcher exhibits brief confusion as her husband morphs into a hostile labor leader who then makes it clear that the script requires this transformation.

Directed with economy by Indhu Rubasingham, the play moves at a steady clip. Richard Kent has provided a mostly white set with minimal white furniture that serves what is almost an extended cartoon well. The appropriately minimalist costumes and wigs come via the Kiln Theater.

This is a light work about 20th century British history inhabited at a fast, talky pace. Now I know, (well, assume), that Thatcher loathed the Queen’s beloved Corgis and found the annual visit to Scotland cold and unpleasant. I left a bit sorry for both Q and T. 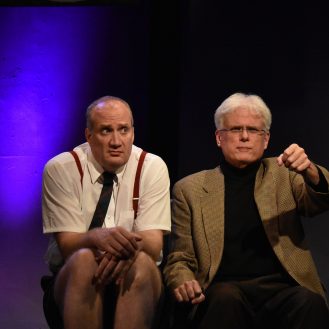