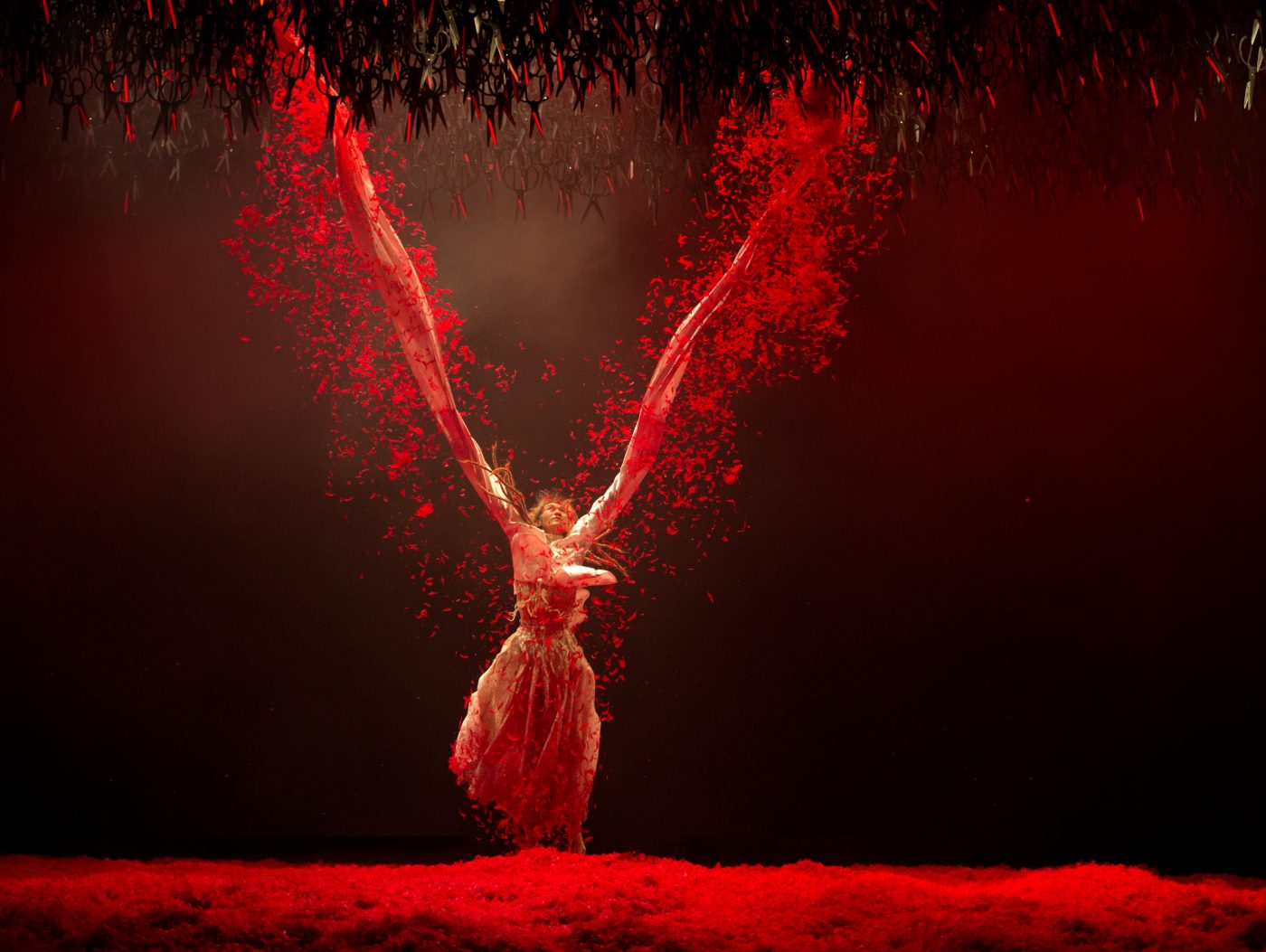 A Scene from Under Siege. Photo LI-Yi-Jian.

Two Thousand Years Ago and Today

Hundreds of silvery scissors hang above the stage in rows, gently swaying and giving off a tinkling metal sound. These scissors have a life of their own, rising and descending, sometimes in voluptuous swoops. On the right a woman sits amidst a pile of white material, cutting the fabric into Chinese characters which she holds aloft. Each time she does this the English translation of the characters appears on screens, introducing a segment of the performance.

And what a performance! Combining dance—traditional and contemporary up to and including hip hop—martial arts, drumming, singing, spoken word, playing the pipa (a Chinese stringed instrument), and paper cutting, it was unlike anything I have ever seen. The underlying “story,” narrated by Xiao He, (Tong Mingguang), a statesman and advisor to Liu Bang, a warrior (Zhu Fengwei), deals with the Chu-Han Conflict in roughly 200 B.C., in which Western Chu and Han struggled for supremacy over China. The performance focuses on the final battle of the four-year war which ended with Han and Liu Bang victorious and Liu Bang proclaiming himself the first emperor of the Han dynasty, the start of modern China.

If certain aspects of Under Siege are reminiscent of the film, Crouching Tiger, Hidden Dragon, it‘s because the film and this production are both the work of Tim Yip, here the Visual Director/Set and Costume Designer. Yip has clearly worked closely with Choreographer and Director Yang Liping, herself inspired by choreographer Pina Bausch.

All the leading roles are played by men including that of Yu Ji, (Hu Shenyuan), the devoted concubine of ambitious leader Xiang Yu (Ge Junyi). Hu Shenyuan entirely captures the movements of a woman’s body with incredibly fluidity and elastic joints. His/her “suicide” pas de deux with Ge Junyi is lyrical and striking as the embrace, perform elaborate lifts and end as the two hold opposite ends of a length of red ribbon in their teeth until the concubine winds it around her neck in self-strangulation.

Han Xin is also a character of note, a “brilliant tactician who straddles life and death” played by two performers, Gong Zhonghui as the white version; Ouyang Tian as the black, to underscore his double dealing and duplicity.

At the end of the performance the stage is a mass of red paper scraps (or possibly feathers) that roll and swirl around the actor/dancers, turning the world into a fountain of blood. The performers scoop it up, toss it around until it’s part of them.

A truly original, inventive work, Under Siege is occasionally hard to follow but it doesn’t matter. The spinning kicks and leaps performed by dancers who must be made of iron and chiffon are dazzling as are various effects courtesy of Mr. Yip including the chariot that becomes a ladder, a palanquin, and a triumphal throne and the gold flags sent whipping through the air.

I was spellbound throughout the nearly two–hour performance as was the rest of the audience judging by the enthusiastic applause and cheering that greeted the end. The show has been in development since 2014 when it began as a twenty-minute version. This production has played hundreds of times in China where audiences have been highly engaged, “unusual,” says Yang as “Chinese audiences are not very receptive to contemporary dance.”

We know that war takes a terrible toll. That is the central idea of Under Siege which is as relevant today as it was two thousand years ago. This highly theatrical offering is strikingly creative, a mesmerizing experience crafted with tremendous skill and beautifully executed.

A household name in China, Yang Liping is from Dali in Yunnan province and has won numerous awards for her work as a performer and choreographer including the gold award for 20th Century Chinese Classics of Dance and outstanding performance awards at the 4th China “Lotus Awards.” She is an artist to watch intently.