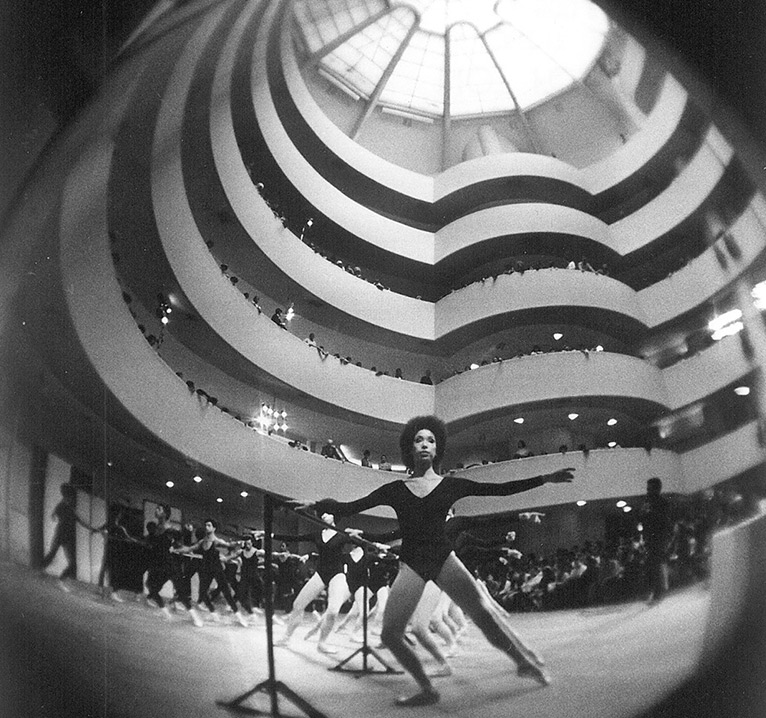 A Great Company Looks Back

“The arts ignite the mind, they give you the possibility to dream and to hope.”

So said Arthur Mitchell, founder of the Dance Theatre of Harlem. The company made its official New York debut in 1971 in the rotunda of New York’s Guggenheim Museum. To celebrate the Guggenheim building’s 60th and Dance Theatre of Harlem’s 50th anniversaries, Works & Process, the performing arts series at the museum, presented a Rotunda Project that acknowledged Mitchell’s death in September, 2018 by including a restaging of his Tones II by former DTH principal ballerina Lorraine Graves with assistance from former principal ballerina Caroline Rocher.

The work, set to discordant music by Tania León, feels contemporary. It’s very stark with interesting balances and complicated body-folding, women often wrapped around their male partners. The men, Anthony Santos, Dustin James, Derek Brockington, Kauadio Davis, Choong Hoon Lee, Dylan Santos and Christopher Charles McDaniel are etched precision, their lithe bodies a study in controlled elegance. The choreography isn’t gripping but the dancers move with such determination it’s hard not to get won over. There is more than a nod to Balanchine –entirely intentional—so the work overall is derivative. That made it less than thrilling although the dancers played it with total sincerity and devotion and looked great in gray unitards, the women’s splashed with jewels at the neck.

Tones II was the standout event, served last. First on the program was Nyman String Quartet #2, with choreography by Robert Garland, a sort of blend of ballet-cum-jazz that was just plain dull. I wanted the dancers to loosen up but no; despite the hip swiveling and faintly jazzy arms, it was an attempt at cool which probably looked more so when first presented. From the Guggenheim’s second tier the floor patterns were dramatic but that and the dancers’ sincerity was pretty much what there was.

Excerpts from George Balanchine’s The Four Temperaments was the mid-section with Yinet Fernandez, Da‘Von Doane, Amanda Smith, Anthony Santos, Daphne Lee and Dylan Santos. As it progresses the work gets more interesting with the final step in which everyone’s feet hit the floor as one arm shoots skyward still a winner. The women’s beautifully stretched feet were on display throughout the piece which was set to music by Paul Hindemith, enlivened by the piano played by Susan Walters.

The Dance Theater of Harlem, founded in 1969 under the co-directorship of Arthur Mitchell and Karel Shook, was created to put black dancers front and center. Initially serving the Harlem community, the company went on and continues to broaden its reach both by performing around the world and by including dancers of many ethnicities. Money has always been an issue for this talented group but, other than a period in 2004, they have danced on, winning accolades for the 17-member company. When DTH first sought to perform outside Harlem, the Guggenheim opened its doors to welcome them. Through performances, community engagement and arts education, the Company carries forward Dance Theatre of Harlem’s message of empowerment through the arts for all.