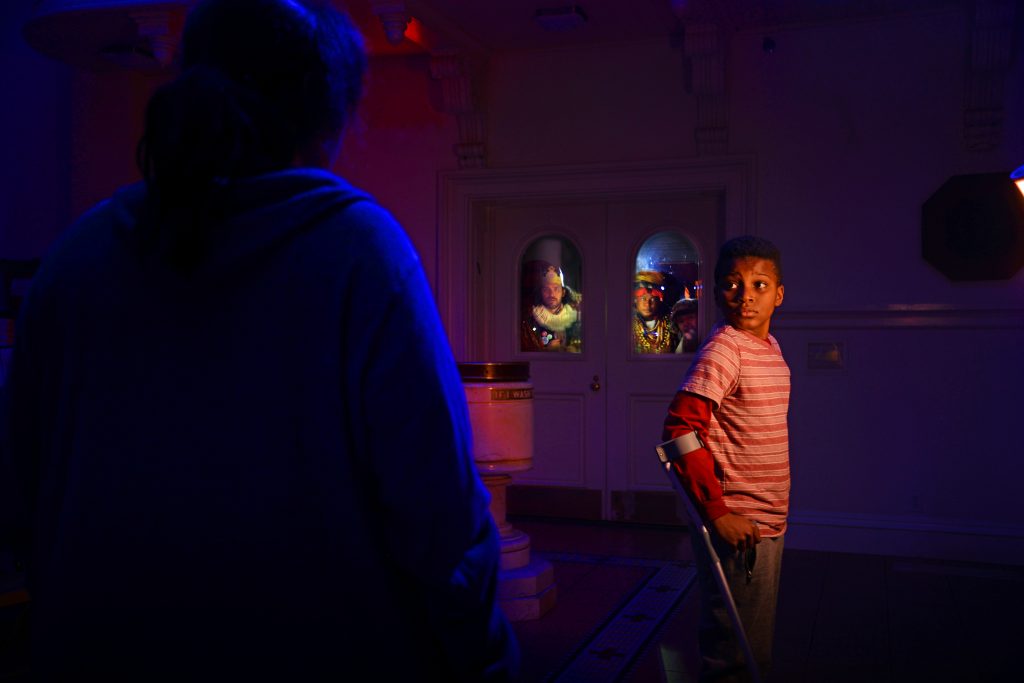 A Scene from Amahl and the Night Visitors at Holy Apostles Soup Kitchen. Photo Van Sise.

Amahl and the Night Visitors has a long history. First commissioned by NBC and performed by the NBC Opera Theater in 1951, it was broadcast live on television as the debut production of the Hallmark Hall of Fame, the first opera specifically composed for American television. Composer Gian Carlo Menotti reported being inspired by Hieronymus Bosch’s painting The Adoration of the Magi and specified that the role of Amahl was to always be played by a boy soprano.

This version, performed in the middle of the Holy Apostles Soup Kitchen in partnership with Breaking Ground, includes a chorus of community members who have experienced homelessness performing alongside renowned opera soloists and musicians.

All the performances—soloists, chorus, dancers—are breathtaking. Benjamin Barham-Wies, the Amahl I saw, has a fine voice and total command of his part. When he opens the door to the second and third kings, his reaction “You’ve got to be kidding” are spot on and when he touches the kings as they ask him to, it’s an exchange of high fives. Soprano Aundi Marie Moore gives an entirely realistic performance as a poor, downtrodden woman at the edge of despair who adores her son—aided by her beautiful voice. The three kings, Julius An as Caspar, Daniel Belcher as Melchior and South African bass-baritone Musa Ngqungwana as Balthazar have imposing voices and terrific stage presence. The work is staged so that performers move through and around the audience which gives it great immediacy.

Special attention should be given to Jessica Jahn for her costumes that capture both the reality of the opera’s situation and the underlying notes of magic as do props by Sydney Schatz. The Three Kings enter each pushing a vehicle containing their worldly goods: a falling-apart baby stroller, a tired supermarket cart and an upright metal shopping wagon. Out of these they unload cardboard to sleep on, various raggedy plastic bags and other materials all New Yorkers are familiar with from observing the homeless. Melchior’s tattered jacket has sparkles on it; Caspar wears a paper crown and brightly-colored “tunic” and Balthazar’s head is wrapped in a somewhat worse-for-wear turban. The wonderful dancers: Omari Contast’e, Negesti, Imani Nzingha, Dana Thomas and Marlene Desiree Watts working with choreographer Winston A. Benons, Jr. are wearing ordinary modern street dress—jeans, tights and tee-shirts. Their interlude makes the most of the limited space and radiates joy. Eric Einhorn’s direction bridges the gap between earlier productions and this site-specific work and the composed of members of the American Modern Ensemble conducted by Geoffrey McDonald has a full, rich sound.

The production perfectly encapsulates the themes of humility, generosity, love, community and faith and adds to the emotional content by the inclusion of the community members. If you see no other holiday performance this season, go see Amahl. I was moved and thrilled. 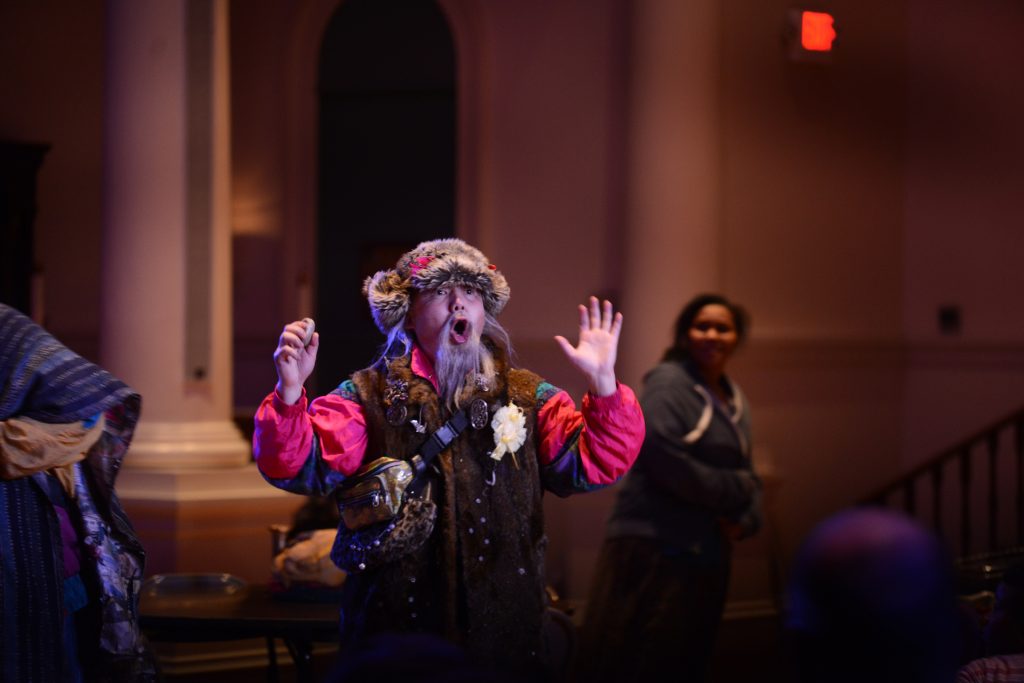 A Scene from Amahl and the Night Visitors at Holy Apostles Soup Kitchen. Photo Van Sise.

Holy Apostles Soup Kitchen is New York’s largest soup kitchen and has been a symbol of hope and compassion in the Chelsea section of Manhattan since 1982, feeding about 1000 meals to hungry and homeless citizens

Breaking Ground is New York City’s largest provider and developer of permanent supportive housing, and a leader in developing targeted solutions to homelessness. With 24 transitional and permanent residences under management, primarily in New York City, Breaking Ground provides safe, stable, beautiful housing for those who need it most. Breaking Ground also runs, under contract with the Department of Homeless Services, street homeless outreach in all of Brooklyn, Queens, and a portion of Manhattan. Since 1990, Breaking Ground has helped more than 14,000 people escape and avoid homelessness.