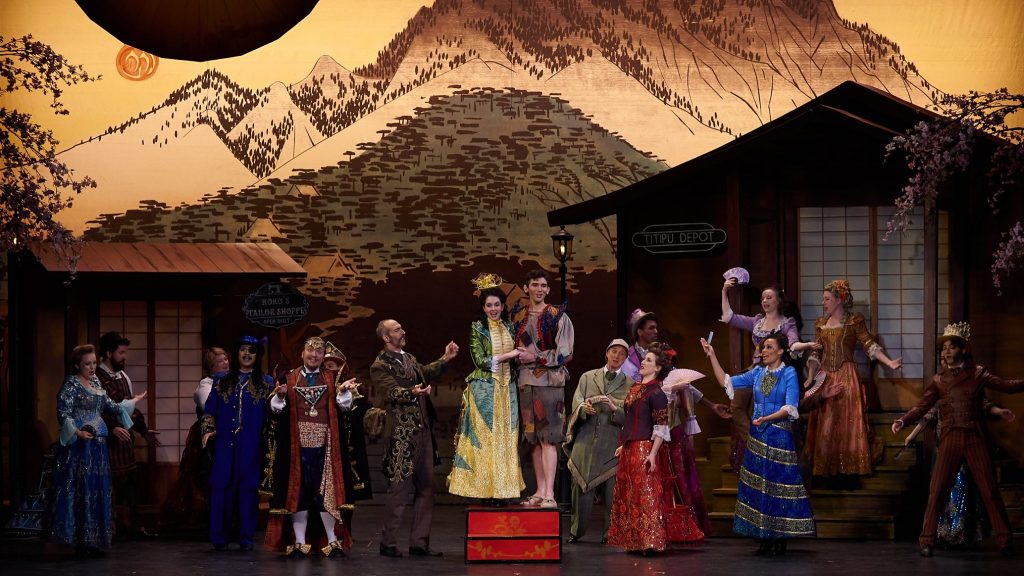 A Politically Correct Mikado (With a Dash of Keystone Kops)

This production hews to the original Gilbert & Sullivan work in many ways but takes great care not to offend as did the 2015  production which the company pulled. Instead of being transported to the fictional town of Titipu, typically introduced as the curtain rises by the men’s chorus singing If You Want to Know Who We Are, often complete with snapping fans, this version opens with a prologue in the D’Oyly Carte Company’s headquarters. The scene reveals Messrs. G. and S. with producer Richard D’Oyly Carte mulling over what will follow their current hit, Princess Ida. Inspired by interest in things Japanese, a craze that swept London in the mid-1850s, Gilbert (David Auxier who also plays Pish-Tush), sustains a minor head injury and, as though in a dream, conceives the operetta that follows.

Out with the old stereotypes of yellow face and Japanese costume. In with a multi-ethnic cast singing and prancing before a delightful set with a backdrop recalling Hokusai’s The Great Wave. This and other bits of scenery are the work of scenic designer Anshuman Bhatia whose designs are simple, effective and moved around by the actors. This Mikado has been reset in the 19th century so we get ladies in quasi-Victorian dresses complete with clever external bustles and wacky hats, all with an overlay of glitter. The men have undergone a similar transformation with chorus costumes nodding to Sherlock Holmes, a fireman, butcher, dandy and other British 19th century types. Overall, the costume by Quinto Ott are terrific although fewer upturned wide shoulders would have been welcome especially those affixed to Yum-Yum’s (Sarah Caldwell Smith) wedding dress which are unbecoming and look uncomfortable.

The singing is excellent throughout even though much of the recitative has been dropped in favor of spoken word. Unfortunately, the venue muffles the sound so some of the words were difficult to hear clearly although what seemed to be a change in mic levels made Act II more easily audible. The entire cast hams it up entertainingly, particularly Ko-Ko (David Macaluso) whose wig is reminiscent of Gene Wilder and trousers a tribute to Elton John and Poo-Bah, (Matthew Wages), Lord High Everything, who is suitably broad both in body and performance.

NY GASP has always “firmly held the belief that modern topical references are appropriate to make the audience’s experience…immediate” so there are references to Botox, hashtags, and even Trump scattered throughout, particularly in the I’ve Got a Little List and A More Humane Mikado numbers, the latter well-sung by David Wannen wearing a spectacular dragon headdress.

Katisha, who usually first appears in Act lI, makes an impressive entrance in Act I, possibly to give greater attention to Caitlin Burke’s fine mezzo-soprano and acting chops. Other musical numbers have been reshuffled here and there but it doesn’t matter at all as the work shines thorough. The original Mikado was written as a satire on British politics; this approach is almost a take-off of what came before.  And fun.

The small NY GASP orchestra, led by Associate Conductor Joseph Rubin, performed with verve; the choreography by David Auxier who also directed was jaunty and in keeping with the tone of the performance.

In its forty-fifth year, New York Gilbert & Sullivan Players (NYGASP) is America’s preeminent professional Gilbert & Sullivan repertory ensemble.  Led by Artistic Director Albert Bergeret, the company has presented over 2000 performances of the G&S masterpieces throughout the United States, Canada, and the U.K. captivating audiences of all ages. 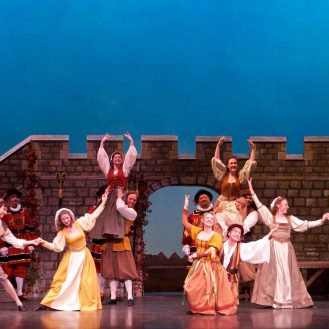 Gilbert and Sullivan’s The Yeoman of the Guard by NYGASP