Did it really happen? Is he really gone? The anxiety, the fear campaign, the year of a hundred opinion polls; they’re all over. John Winston Howard, Liberal, former member for Bennelong, George W. Bush’s “man of steel,” the most willing of the coalition, Australia’s second longest serving and most conservative Prime Minister, suffered a resounding electoral defeat at the hands of the Australian people on November 24, 2007.

When I dared imagined political change, I never thought it would go down like this. It is difficult to convey to people outside this country just how rusted on Howard seemed during his eleven and a half years as PM (no, Australia doesn’t have term limits). It truly was a Howard Era. Aside from his odious and divisive policies, the shadow of his Government seemed somehow to lie behind every whining leafblower, every reckless SUV, every McMansion, every feeble Australian film. Obviously this is all irrational; there is a new Labor government and the life’s annoyances remain. The Great Unravelling (Paul Krugman’s phrase will be the most enduring, I think) has made us uncharitable and bitter. It has filled subtle minds with unsubtle thoughts. It has blunted human interaction and cast us all as stereotypes — Chardonnay Socialists, Cheese Eating Surrender Monkeys, Security Moms, NASCAR Dads, Howard Haters and South Park Conservatives. In Australia that era is over and by God is it good. We have our brains back now.

How do you imagine all this ending? How will the good times return?

Until the election I had assumed that, over time, the reality based community of Chardonnay Sippers would make small gains. We would write sensible articles and gradually people would see reason. One day perhaps our leader would tell one lie too many and a gradual erosion of support would transpire. The Opposition would gradually claw back seats in Parliament, Howard would retire, and moderation, imperceptibly, would prevail.
It wasn’t like that on Australia’s fateful election night. In one night John Howard lost everything, becoming only the second sitting Prime Minister to lose his own seat in Parliament. His once powerful Liberal party has no choice now but to acknowledge Labor’s mandate and, I hope, to transform itself into a moderate party of the centre-right.

The reasons for Labor’s triumph under Kevin Rudd, Australia’s 26th Prime Minister, (that felt so good I think I’ll write it again…Kevin Rudd, Australia’s 26th Prime Minister), have been well documented in the weekend papers, and I won’t go into them now. What the papers cannot convey is the remarkable lack of resentment or even gloom among Howard supporters. Most of them seem relieved. It is as though a spell has lifted. This reaction, combined with a general lack of gloating on the winning side, encourages me to believe that a real cultural shift has occurred, literally overnight. Perhaps this is the beginning of real consensus, not the insipid and sentimental centrism of a David Broder, but of and honest and mature sense of commonwealth. All the bullshit about Kyoto wrecking the economy, all the scare campaigns about union headkickers running amok in the workplace; these were the staples of Howard’s campaign and suddenly no one believes them anymore. It was only smoke from a dying fire. We’re all about the future now.

Australian elections don’t get much play in the States, and what attention this one received mostly concerned Labor’s plans to withdraw Australia’s remaining combat forces from Iraq. I do hope at least some of the Democratic candidates were watching. It is imperative that the people of the United States do this for themselves. It is possible for one election to realign everything (Florida 2000 certainly did) but you have to kick ass first. Part of the genius of the Kevin 07 campaign was the way he managed to embody a clear alternative government while engaging in the eggshell walking necessary in a prosperous country emerging from conservative government. Like it or not, striking this balance is the task of centre-left parties these days and we rarely acknowledge that it can be done well. The Republicans are not half as clever as Howard. They are quite capable of total collapse.
Over the weekend I happened to spend a few hours in the delightfully unpretentious Old Parliament House in Canberra. Its sunny corridors must surely be filled with ghosts. There are few places in the world where the public can freely wander the halls of what was so recently the seat of government. Part of the building houses the National Portrait Gallery, and one large canvas depicts a grinning John and Janette Howard, Sydney Harbour spread behind them. The label had already been updated to reflect the new order of things, and it fills me with hope to imagine one of the staff turning up at dawn, Monday morning, in order to be the first to shove history into the past.

A New Australian Pavilion at the Venice Biennale: Sign the Petition Calling for an Open Competition (UPDATED)

Australia Says No, Thanks: the Election of 2010

Barangaroo: Not so Fast? 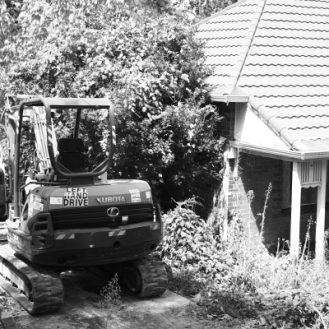